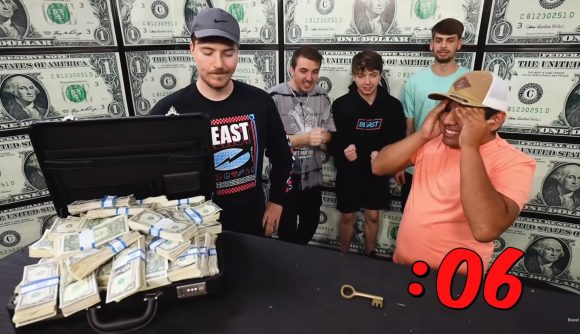 After 70 hours of continuous play, the massive one-time multiplayer game, Finger On the App has ended. Late last Tuesday, the game set over 1,000,000 players against each other in the ultimate dexterity and endurance challenge – keep your finger on the screen for as long as possible. The prize? An amount between $1 and $25,000 determined by the votes of all the players who lose. But in the end, the person responsible for the game, Mr Beast, ended proceedings, offering $20,000 to all four remaining players.

“I’m ending it here. Three days is insane! You ALL win and will ALL receive $20,0000! CONGRATULATIONS!” tweeted the philanthropist YouTuber, following it up with “GO TO SLEEP!”

Finger On the App is a game collaboration between MSCHF, a mobile studio known for unconventional giveaway games, and Mr Beast, a YouTuber who has become famous for his charitable stunts, including giving his mother $100,000 and opening a ‘free car’ dealership.

But Finger On the App divides opinion, with a New Statesman article notably calling it “the dystopian competition that sums up everything that’s wrong with the internet.” People also expressed concerns about other players using bots to cheat the game.

But one of the most tragically funny occurrences of Finger On the App, are the streamers who were tricked into opening up Siri on their phones, and so losing the game. There’s even a compilation (though be warned of swears in the video):

Here is a montage of people losing the finger on the app challenge because of Siri 😅 pic.twitter.com/LzEDdASs0D

Even after Mr Beast ended the game, a couple of people refused to stop playing, believing that after a variety of tricks across the three days, including Mr Beast trying to call contestants, and offering players money to lose, that this was another deception.

“Glad a robot didn’t win,” tweeted Donaldson in relation to concerns that players might cheat the game with a bot. We don’t know if there’s going to be another round of the game, but if you want to see what the game is about, have a look at our Finger On the App guide.

If you’re also curious about future games like Finger On the App, you can download MSCHF on Google Play and the App Store, where the developer reveals all its future games.