Fire Emblem: Three Houses is an exceptional game full of wonderful characters and diverging storylines. It’s one of the best games in the series and even has DLC adding even more faces and a new storyline. The sheer amount of content in the game is pretty astounding.

So, how do you keep up with everything? If you’re playing the game for the first time, there are so many moving parts that you may lose track. We’re here to help, just a little bit, with a handy list of all the Fire Emblem: Three Houses characters to help you keep track of everyone. Of course, there are some minor spoilers below, but only for the introduction of the game.

First, however, a warning: there are a lot of characters that only appear in certain playthroughs. As you can play the game in four unique ways, there are certain characters that you won’t spend a huge amount of time with, so some may seem like strangers. If you’re a fan of these characters, check out our Fire Emblem Warriors: Three Hopes release date guide to get the lowdown on the upcoming Three Houses musou spinoff. 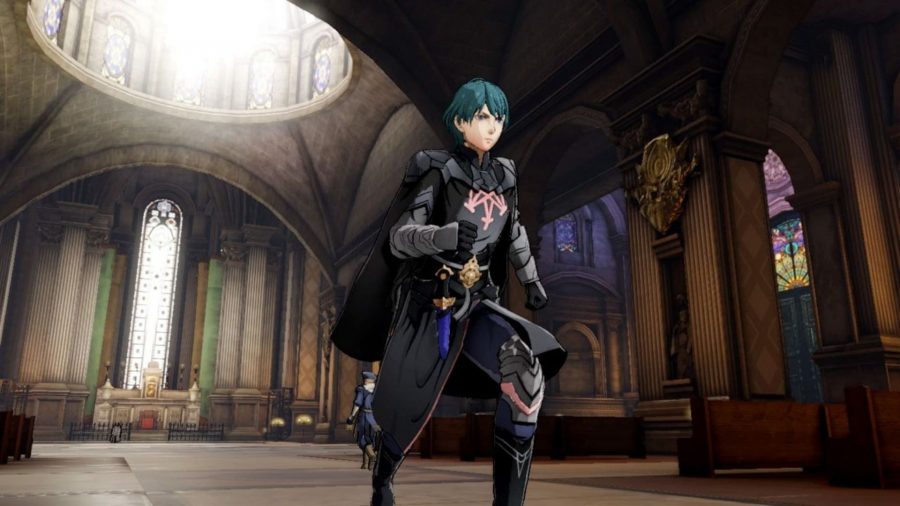 The player character for the whole of Fire Emblem Three Houses, Byleth, can be either male or female. They’re the child of Jeralt, travelling as a mercenary with him. After the introduction, they join Garreg Mach Monastery as a professor, leading one of the three houses through the dangers that eventually arrive. 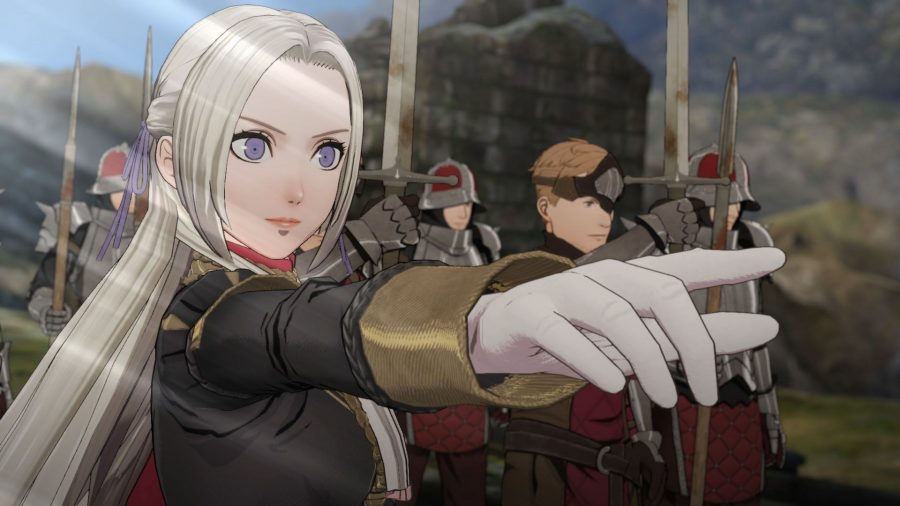 The leader of the Black Eagles, Edlegard, is a strong-willed student. She is pivotal to the plot of Three Houses. She’s 17 years old at the beginning of the game.

Hubert is sort of like Edelgard’s right-hand man. He’s 20 years old at the beginning of the game.

Ferdinand is a confident noble and one of the Black Eagles’ cavalry units. Furthermore, he can be a little arrogant sometimes, and he’s 17 years old at the beginning of the game.

Linhardt is a healer, although he can be a little lazy. He has been good friends with Caspar for most of his life. He’s 16 at the beginning of the game.

A good friend of Linhardt, Caspar is pretty straight edge. He wields either an axe or wears gauntlets. He’s 16 at the beginning of the game.

Bernadetta is a particularly sheepish noble, spending most of her time in her room. She’s 17 years old at the beginning of the game.

Dorothea is basically a theatre kid. She used to do opera and has a certain air of haughtiness, which is interesting as she’s the only one not of noble birth in the Black Eagles. She’s 18 at the beginning of the game.

Petra struggles to speak the language of Fódlan, having been born in Brigid. She’s great with a sword or a bow, and is especially speedy. She’s 15 at the beginning of the game. 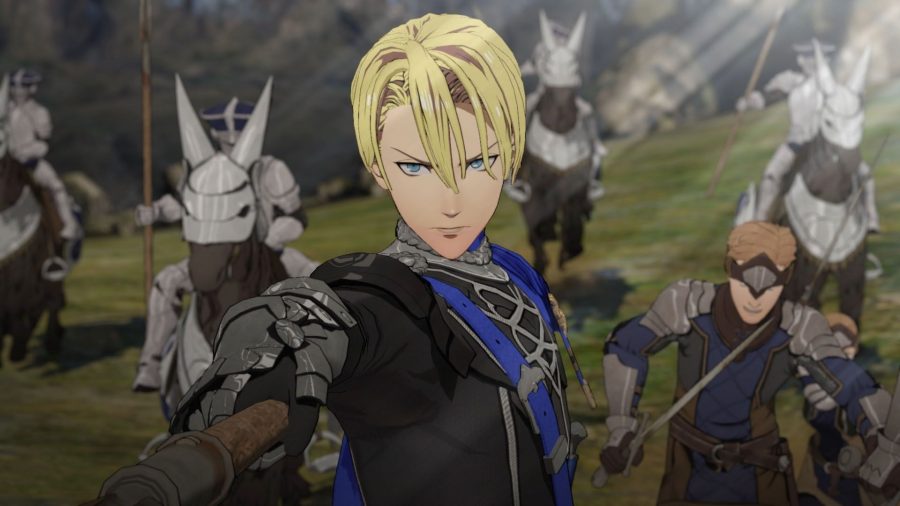 A polished, 17-year-old noble, Dimitri wields lances and looks good doing it. He’s the leader of the Blue Lions.

Always by Dimitri’s side, Deduce is from the Duscur region and works as a bit of a tank during battles. He’s 18 years old at the beginning of the game.

A 17-year-old master of offence, Felix lost his brother during in tragedy of Duscur, leading to some tension between him and Dedue.

A bow-wielding, energetic member of the Blue Lions, Ashe is positive and optimistic. He’s 16 at the beginning of the game.

The19-year-old Sylvain has an obsession with the beautiful women around him, always talking about them. He’s great as a cavalry class.

Another noble child, Mercedes, is very religious, and has a good affinity for magic. She’s 22 at the start of the game.

An energetic, hard worker, Annette is out to please her fellow students. She’s 16 at the beginning of the game.

The 17-year-old Ingrid aspires to be a knight, taking everything with a level-headed mindset. 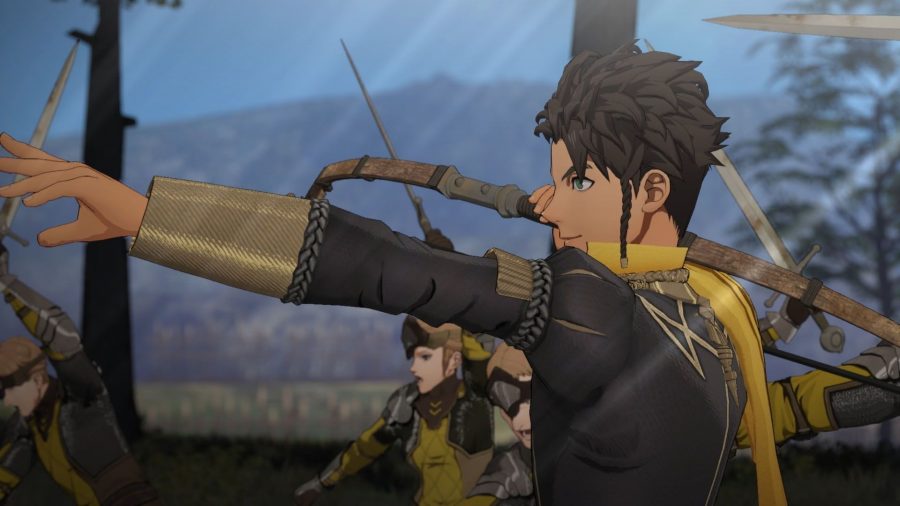 As the leader of the Golden Deer house, Claude comes across as affable and slick. He’s heir to the house of Riegan and wields a bow. He’s 17 years old at the beginning of the game.

The 18-year-old Lorenz is polished and restrained, clearly being proud of his noble lineage. He excels in many different classes.

Raphael comes across as a lovable giant, with his too-tight shirt looking ready to pop. He’s 17 years old at the beginning of the game.

As a quiet and bookish character, Ignatz is kind of similar to Bernadetta, except less of a recluse. He’s 17 at the beginning of the game.

The youngest student at 15 years old, Lysithea is extremely talented and hard-working. She’s a very hard-hitting mage but lacks in other areas.

Marianne is a friendly and self-effacing 17-year-old. She’s a healer but has better offensive capabilities than the others.

The 18-year-old Hilda is an energetic student, ready for a fight but not out of silly bravery. She wields an axe.

Leonie is another incredibly hard-working student, training hard every day in the hope of becoming a mercenary. She’s 19 at the start of the game. 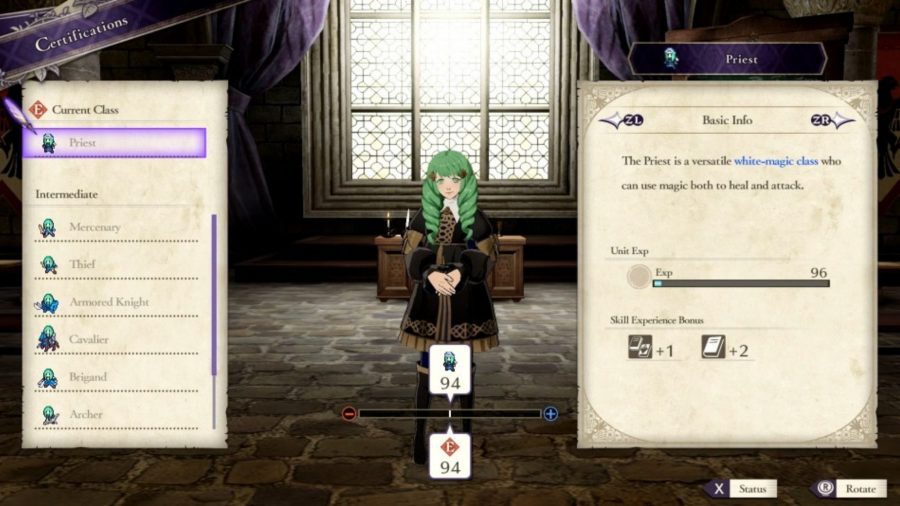 Seteth is the right-hand man to Rhea, devoutly loyal to her and his duties. He’s particularly suspicious of Byleth.

As Seteth’s younger sister, Flayn is often sheltered by him. She’s a decent healer.

Hanneman teaches at the academy, and has a particular interest in crests.

Manuela is a flirtatious and forward teacher at the academy. She keeps her age a secret.

Gilbert is a Knight of Seiros, and can offer lessons in lances and axes.

Another Knight of Seiros, Alois can teach lessons on axes and brawling.

Catherine is a 27-year-old Knight of Seiros and offers training in swords and brawling.

Shamir is a mercenary-turned-knight at the academy, and wields a bow.

Cyril is an orphan looked after by Rhea.

Jeritza is a teacher and can be quite prickly towards Byleth.

Anna is a recurring character in the Fire Emblem series and takes a different class depending on when you meet her.

Aelfric is central to the Cindered Shadows DLC storyline, suggesting that the Ashen Wolves be created. 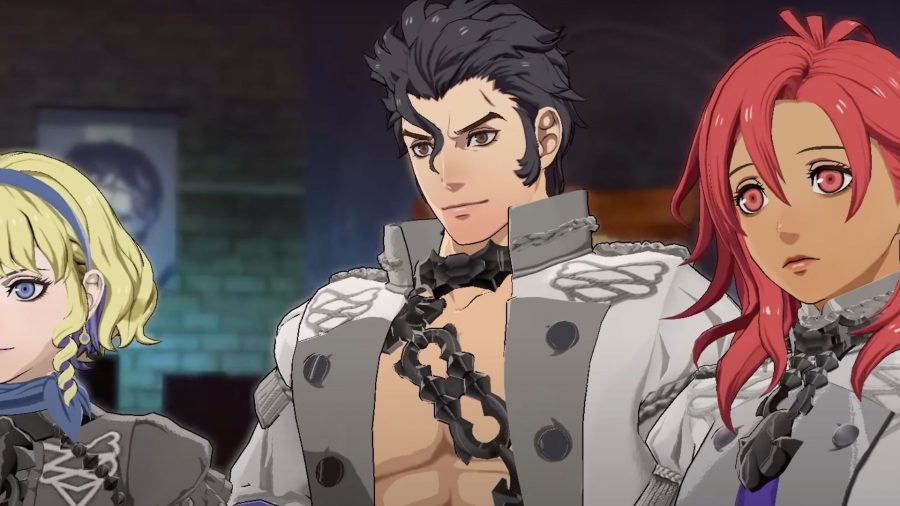 The leader of the Ashen Wolves, a house set up for people living underneath the monastery, Yuri is a 19-year-old sword wielder.

Balthus is a pretty rough-and-ready character who excels at brawling.

Constance is a mage, similar to Lysithea, with a focus on high damage.

Hapi is another mage who ran away from home at a young age, only to find refuge in the Abyss after many years of trouble. 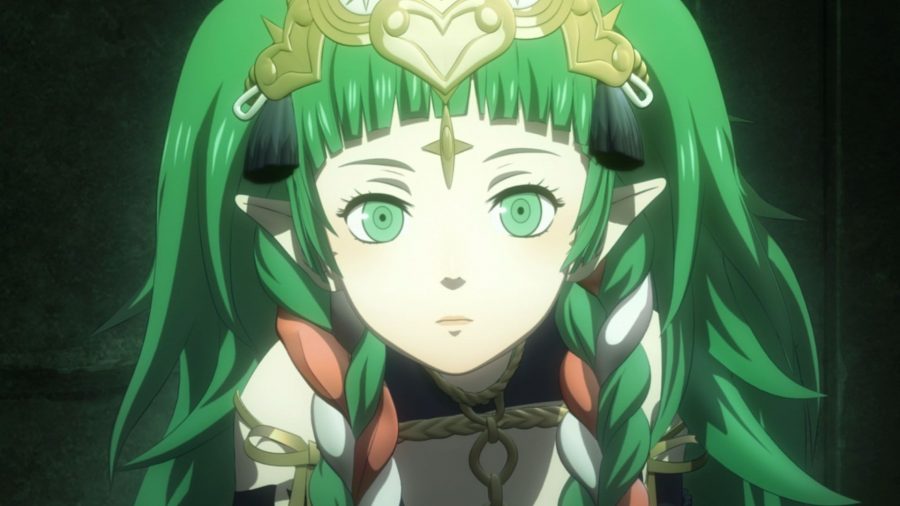 See, I told you there are a lot of Fire Emblem: Three Houses characters. If you’ve come this far, you’ll want to check out our guide to Fire Emblem Warriors: Three Hopes pre-orders to make sure you’re good to go on day one.