In one of the strangest video game tie-ins ever, Cristiano Ronaldo is coming to Garena Free Fire. If a footballer featuring as a major character in a battle royale shooter isn’t odd enough, his arrival coincides with a massive Operation Chrono update that decks the entire experience in a futuristic, almost cyberpunk-themed aesthetic. We bet you can guess the game that inspired that.

You see, new character Chrono, who the new update is named after, uses Cristiano Ronaldo’s likeness, but that’s where the similarity ends. This time-hopping soldier is striving to prevent the futuristic version from sliding into further disarray, and that’s where you come in.

Boot up Garena Free Fire and you’ll see the effects of Operation Chrono immediately. The app icon, menu, and background is all kitted out in a futuristic purple motif – and it doesn’t end there. Battle royale matches now take place in a futuristic version, though you can swap between this, and the classic map, by using a portal handily located on spawn island itself.

Chrono hasn’t actually arrived in-game yet though. He’ll make his debut on December 19, with skills that include a force field, which simultaneously blocks enemy damage and speeds up allies. If you’re not interested in Chrono as a character, you can still get involved in the fun thanks to a ‘Cyber Bounty Hunter’ costume, AUG weapon, and Katana skin.

There are also new modes in the form of Cosmic Racer, a vehicle-based mode that sees 15 teams of two players competing to be the last team standing. You can enter solo, or with a friend, with one of you taking the role of driver and the other as gunner. 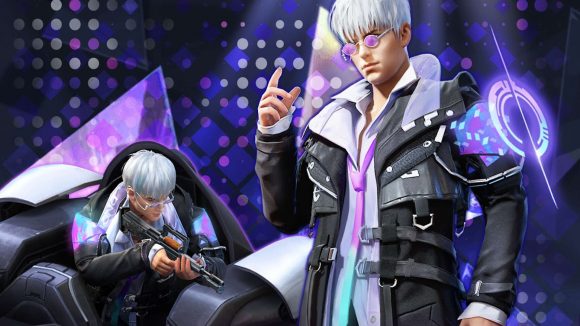 The other mode, Chosen One, sees two teams of four players battle against each other, earning points each time they eliminate an opponent. Earn 40 points and your team wins. The interesting part of this mode, though, is the head-to-head duels, which can happen at any time and pit you against a random opponent. Win the duel and your team gets 30 seconds of bonus time, where points earned are doubled.

Wrapping up the new mode is a vending machine, which appears in-game and allows you to purchase items using 3D tokens, which you can collect while playing. Items include weapons, ammo, items, and a permanent parachute skin.

Operation Chrono is available right now in Garena Free Fire, so go ahead and get involved by grabbing it from the App Store or Google Play.