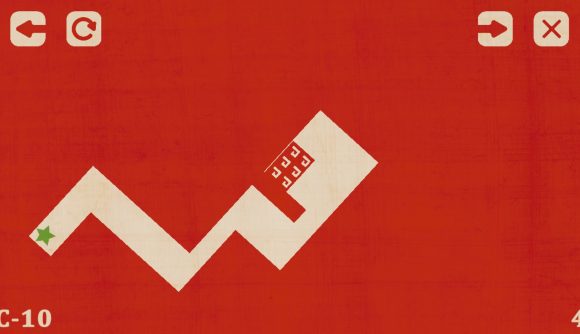 It’s often hard to find the balance between puzzle games that are too complicated, and puzzle games that aren’t complicated enough. But in our experience, the best mobile puzzle games, and the best puzzle games in general, are actually very simple. Look at Portal, for example, and you see a game which centres around one fairly simple mechanic: creating Portals. But what makes the game incredible is how it gradually builds complexity around that.

Girabox is a puzzle game that plays with a similar idea. The central mechanic of the game sees you solve puzzles by spinning shapes, trying to use gravity to move your icon to the goal. Sounds simple, right? Well, just like those previously mentioned puzzle games, Girabox builds complexity as the game goes on, presenting players with a challenge while also retaining that accessible simplicity.

And never one to turn down a good puzzle game, we’ve partnered with Girabox for this week’s giveaway. We’ve got both iOS and Android copies of the game, so if we’ve peaked your interest, be sure to enter down below.

In order to throw your hat into the ring, all you have to do is fill out one of the entry boxes. Please make sure you fill out the correct one for your device, though, as that will affect what code you get if you win. Also please have a glance at our terms and conditions.

We’ll let you know in a week whether you’ve won the giveaway! If you can’t wait to play Girabox, you can also find it on Google Play, the App Store, and even Steam.