I’m a huge horror fan, and I’ve yet to encounter a sub-genre that I don’t enjoy. However, there are some sub-genres that I tend to gravitate towards more than others, one of which happens to be Japanese horror, and this is for a magnitude of reasons, several of which are on display in Ikai.

If you’re unfamiliar with PM Studios’ latest title Ikai, it’s a psychological horror game that derives inspiration from Japanese folklore, which just happens to be some of the most fascinating legends you can come across, to me at least. It should certainly tell you that from a narrative perspective, Ikai has plenty to offer.

As such, that’s where I’ll start. In Ikai, you find yourself in a Shinto shrine, and the game begins with a rather mundane task of learning to draw symbols. However, while it seems nonsensical,  it’s a smart way to get you to familiarise yourself with the mechanic, which is essential for what’s to come. So in that regard, the symbol sequence is great, but several more lacklustre tasks follow, which adds to the initial lack of interest I felt.

Eventually, it’s time for you to do the laundry, so off you go to find it – and there’s no map or guidance marker throughout the game. You just need to wander aimlessly until you stumble upon what it is you desire – a feature that I can appreciate to an extent, but my frustration was paramount at the beginning of my journey. However, the surroundings are haunting yet beautiful, so walking around a pond and through various buildings isn’t such an arduous task. 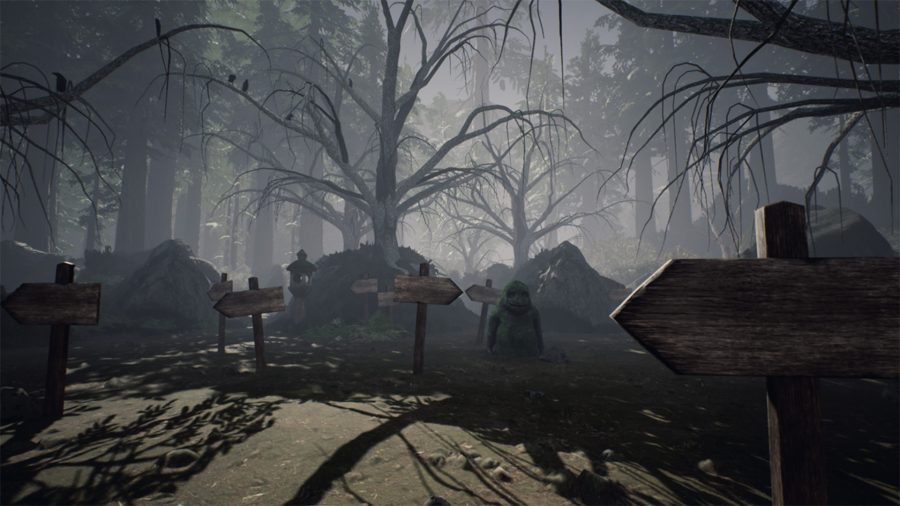 Nonetheless, once I found those dirty clothes the time came to leave the shrine and head to a nearby river to complete the task. But alas, a giant door stood in my way! And here’s where another major mechanic that Ikai relies on comes into play – puzzles. Yes, because this is one horror game that trope that many deem to be quintessential, when in reality they aren’t always necessary, and can even be detrimental to the experience of the player.

Anyway, I finally leave the grounds of the shrine, and it’s at this moment that Ikai’s beauty truly hits me – the forest is luscious, and it begs for exploration, though that’s far from the point of this game (outside the shrine, at least). So, I take great pleasure as I walk through my serene surroundings, and listen to the wonderful sounds of nature. That is, until I come across a scene that not only intrigues me and my character, but fills the pair of us with dread.

At first glance, it might not seem like an issue, but upon closer inspection, you find what appears to be a ritualistic dagger, and, as every single horror protagonist would, you pick up the knife, which causes you to pass out. Were this real life, I certainly would run for the hills, and pray at the shrine from the next town over. Sadly, that isn’t an option here. So it’s time to walk through the forest at night. 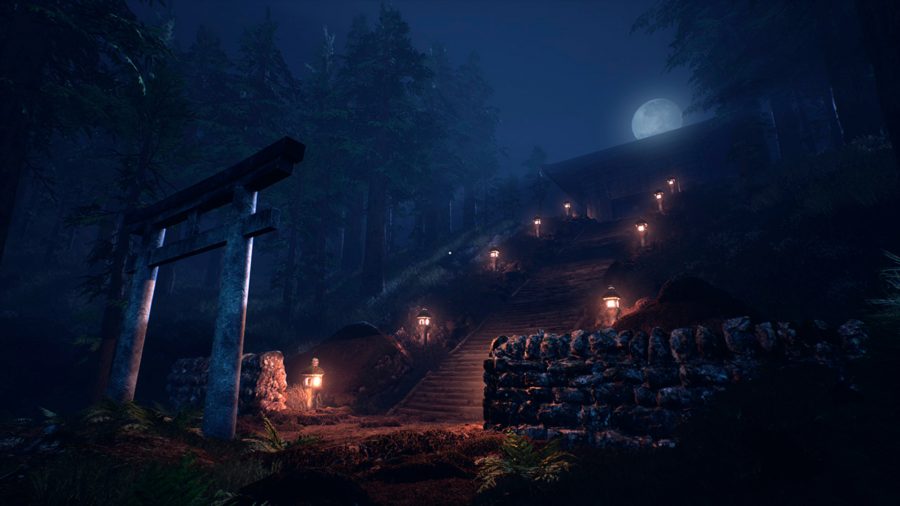 What was once a beautiful sight now emits terror. In the dark, this place loses itself, and thrusts a thick atmosphere upon you, which only intensifies as you slowly work your way back to the shrine. However, I hasten to say that one puzzle you must complete felt completely unnecessary and served as more of a hindrance than anything else. You need to discover a path through some flames, and frankly, it feels like content stuffing, when you could simply return to the shrine and bask in a horrifying ambience before the true terror begins.

the implementation of Japanese folklore is fantastic

At this point, I should say that you encounter various pages, each of which has information on different Japanese spirits – this is no coincidence, and it serves you well to pay attention to the history of the evil beings that now walk the grounds of the shrine. This is where Ikai truly shrines, because the implementation of Japanese folklore is fantastic, and the narrative embraces the element fully. Not once does it lose itself, as determination to cleanse the area fills you.

Speaking of which, now that you’re back at the shrine and the village that encompasses it, you need to dispel the evil spirits, which you do so through the use of symbols. Those lessons at the start of the game now pay off, but it’s not as simple as drawing a random symbol in a peaceful and secluded area.

The mythological beings you need to cleanse from this place aren’t friendly, nor are they in a rush to leave, so after you grab some ink and parchment, it’s time to evade and evict those that want to kill you. Of course, when you do find a table and a brief moment of reprieve, it’s vital that you’re both fast and somewhat accurate when you draw the symbol. 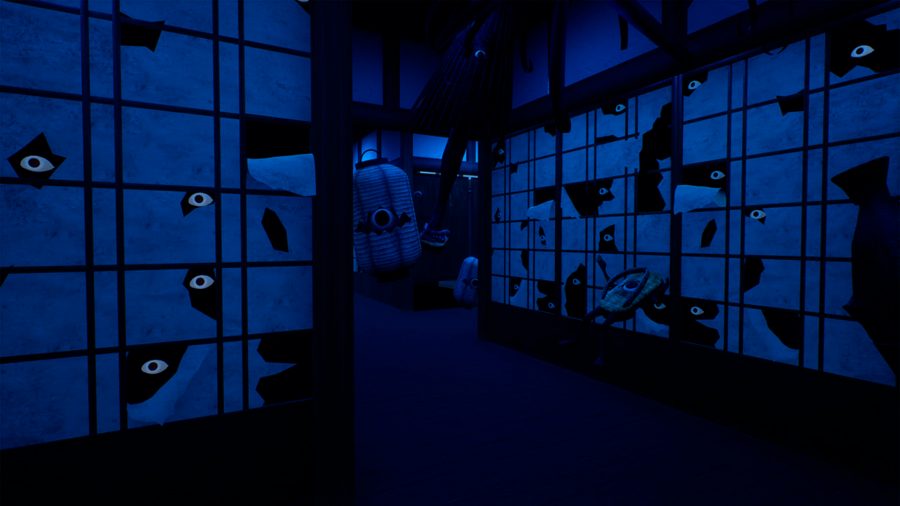 Essentially, this is what you must do for the rest of the game, explore the shrine, and remove the threat. As you go, you can find more pages which inform you of what spirits hunt you, and should they get you, it’s an instant kill. But, when you successfully use a symbol, you banish them. You might wonder how exactly you use them, but that’s why it’s vital that you listen to the verbal cues of your character, as that’s the primary way in which you discover what to do, due to the lack of tasks and markers.

So, since it’s evident that there’s an awful lot of walking and backtracking – to the game’s detriment, I might add – it’s imperative that the controls are smooth. However, in Ikai, it pains me to say that they’re cumbersome, which can make navigation a somewhat painful experience at times, to the point you may think ‘bugger it, demon, take me!’

What makes this aspect even more disappointing is that the world of Ikai is chilling and atmospheric, yet in the blink of an eye, poor movement or a janky camera angle can rip you out of immersion. This is truly a crying shame, as keeping the player is on the edge of their seat, never feeling safe, with dread running through their veins, is vital to the success of a horror game – and all of this goes kaput at times due to controls that need some work. 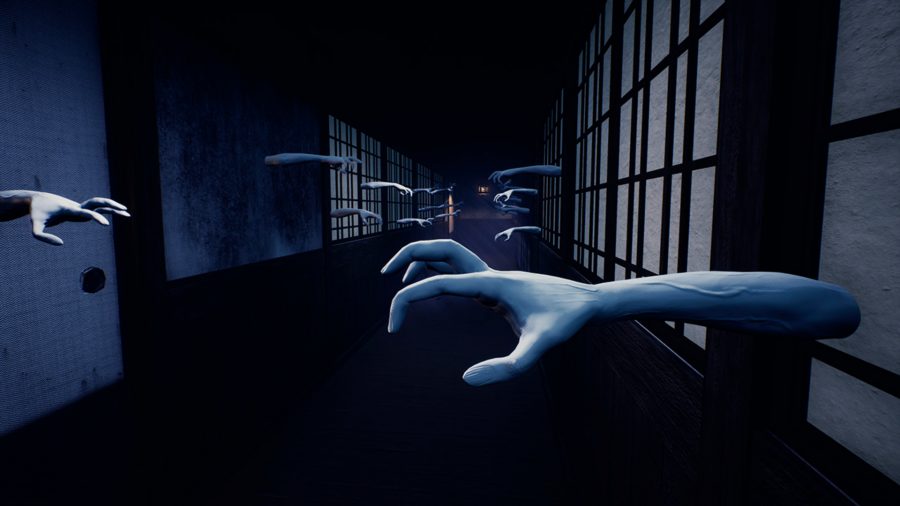 I’m sorry to say that the negatives keep coming, as my experience in a world and story that feels designed to appeal to me becomes flawed by a cluster of puzzles that lack excitement, which ushers in a sense of boredom. Puzzles in horror games are commonplace, with the Resident Evil franchise serving as the perfect example of fantastic implementation, a lesson that Ikai needs to learn.

Puzzles do make sense in this game, it’s just that some feel misplaced, and perhaps there are some missed opportunities. But for the most part, what you find is boring and doesn’t feel like it belongs, which is baffling to me when the Japanese folklore and narrative aspects of Ikai are done so well.

Speaking of the narrative, while it’s fantastic, and I love the little tidbits you can discover that strengthen the lore and offer further insight into the spirits around you, there’s a profound factor that needs some serious work. You see, despite the haunting setting, perilous atmosphere, and sense of dread, Ikai is missing one vital thing that you expect to find in a horror game – scares.

Unfortunately, Ikai just isn’t scary, and this is a shock, especially since many consider Japanese horror to be the pinnacle of blood-curdling experiences, but Ikai doesn’t reach the high of its brethren, such as Fatal Frame. Too often, it feels as though Ikai relies on jump scares, but once a spirit kills you once, that specific type of terror is redundant. It doesn’t have the same effect after it occurs multiple times.

That’s not to say that there aren’t dark moments. There are. The story depicts plenty of strange occurrences that take you to a place in the deep recesses of your mind, but I wouldn’t call these moments scary. 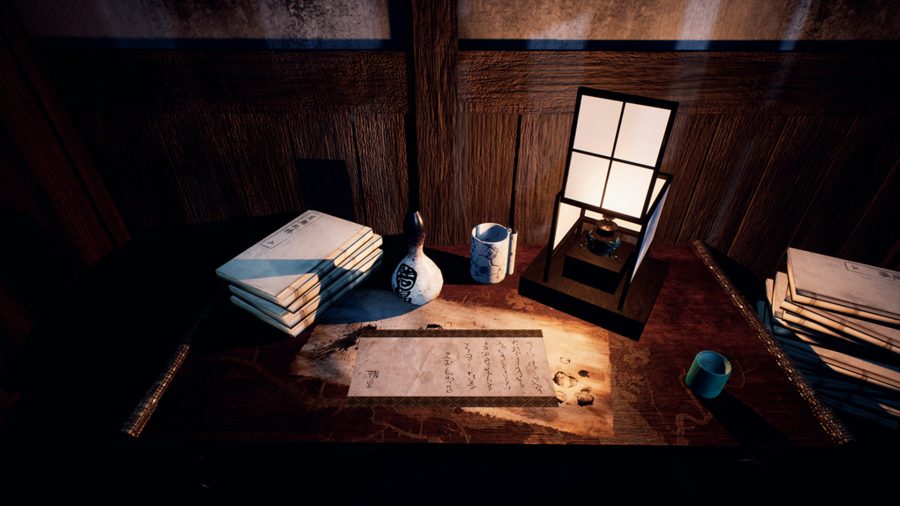 You know what though, I find myself unable to allow negatives to be one of the final things I have to say about a game that nails some areas, and does show great potential in its weaker areas. As such, I feel the need to mention the sound design, which is part of why the atmosphere succeeds, because each individual noise contributes to the bigger picture.

Seriously, even as you walk through the shrine, you can hear the odd creak of the floorboards, and were I a little bit more on edge, I can see that this would have the potential to increase my inner fear metre.

Right, onto how Ikai performs on Switch – the answer is surprisingly well. From a performance perspective, it runs well, and there are minimal issues to speak of, save for the odd framerate drop here and there. Visually, Ikai looks great, and it doesn’t matter how you choose to play, either docked or hand-held. You can be sure it won’t fail on the performance side of things.

In the end, Ikai has a fantastic story, an intricate world, and depicts Japanese folklore in an enticing way, but it’s weighed down by an influx of mundane puzzles and janky controls. Still, if you’re a Japanese horror fan, I recommend you check Ikai out, as its narrative outweighs its lower points, at least enough to give it a try.

Despite the cumbersome controls, lack of scares, and somewhat mundane puzzles, Ikai has a fantastic atmosphere, and can offer Japanese horror fans a strong story that keeps you hooked throughout