I’ve made no secret of the fact I’m a huge fan of Mario Kart Tour. It’s been my favourite mobile game of the moment since it launched back in September, despite its quite obvious flaws. It simply provides most of what you want in a mobile Mario Kart: short, snappy fun that you can return to for a few minutes each day. It’s so fun, in fact, that I found it quite easy to ignore the rubbish multiplayer, the hand-holding, and the rather aggressive monetisation.

That is, until KartRider Rush+ came along and made me question everything about my favourite mobile kart racer. It launches so feature-complete, and with such confidence and bluster, that it’s left Mario Kart Tour in the dust.

From the moment the servers were switched on, we had genuine multiplayer. In fact, rather than the afterthought that it felt like in Mario Kart Tour, it’s the centrepiece of KartRider Rush+. There are loads of different modes too, including Speed Race, Arcade (which, itself, features sub-modes), Ranked, Story, and Time Trial. Aside from Story, you can enjoy all of that content with your friends or strangers.

It is worth mentioning that this isn’t developer Nexon’s first rodeo. KartRider has been around since the early ’00s, beginning its life on PC. This isn’t even the first time the series has been on mobile, as KartRider Rush, the game that this is heavily-based on, launched and closed in the mind-’10s.

What we’re getting at, is that Nexon does have pedigree when it comes to kart racers, and KartRider Rush+ doesn’t exist in isolation. However, the extent at which this improves on Mario Kart Tour, and the bevvy of other mobile kart racers past and future, remains impressive.

It helps that it just nails the basics. While Mario Kart Tour often feels like you’re on rails, given that it’s really hard to fall off a track or crash, KartRider Rush+ chooses to treat you like an adult. You can crash into walls, fall off the track, and drive in the wrong direction. This gives winning a sense of real achievement, rather than feeling like luck. 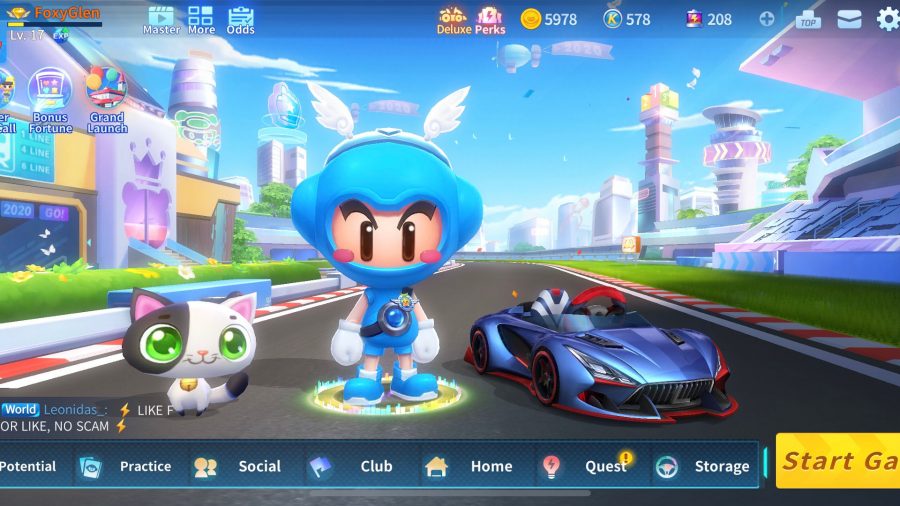 This is further enforced with the sheer number of driving mechanics. When starting a race, you can tap at the right moment to initiate a turbo boost. Hammer the left hand side of the screen with your thumb while racing, and you’ll get a steady stream of mini boosts. There are also so many different ways to drift that it almost feels like a high-score chasing skateboard game.

It’s this system that sets apart the best from the rest. As you perform drifts, whether they’re just short s-drifts or larger corner drifts, you’ll charge your nitro bar. When full, you can use it to give yourself a considerable speed boost. The best players will likely maintain this nitro boost for the entire duration of the course, snaking all over the place to fill their nitro metre with style.

The amount of content on offer is almost an embarrassment of riches. The Story mode feels very Nintendo or Sega, with the game’s diverse cast of racers presenting various different conundrums over the course of 16 different chapters. Each chapter consists of five races, with various different objectives to complete. There are also a number of different charming cutscenes to watch, which help set the scene. 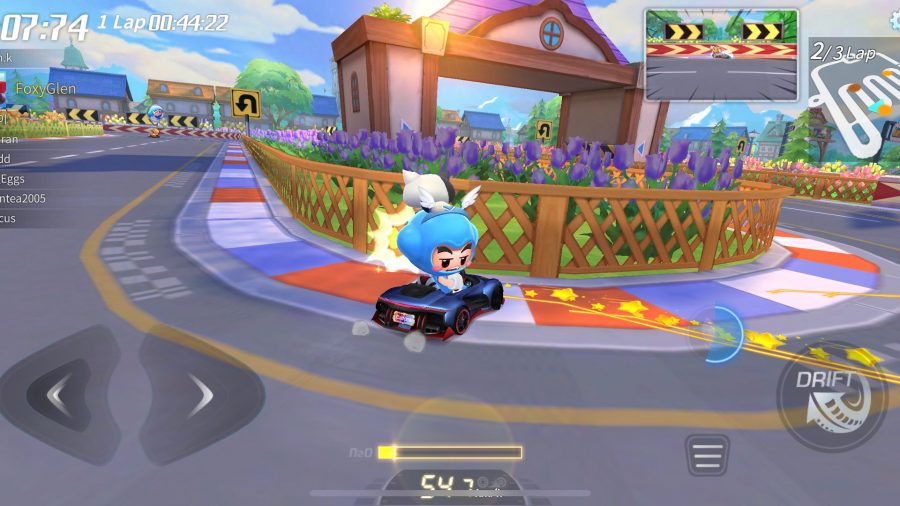 Aside from a sandbox-style training camp and tutorial-hidden-as-gameplay license tests, everything else is multiplayer, and that’s exactly what you want from a kart racer. We appreciate Speed mode in particular, as it turns off the items you can use to gain an advantage, allowing you to rely on skill alone.

There are a bunch of different racers in KartRider Rush+, and we thought we'd highlight them all here.

Curiously though, Item Race, which is a part of Arcade mode, doesn’t allow you to use your nitro boost. That takes out a hugely important skill factor, forcing you to rely on items instead. We guess it makes a degree of sense, given that you can get a nitro boost out of an item box, but it’s disappointing nonetheless. You get the sense that this mode aims to target casual players.

Ranked is where you will likely spend most of your time, as it’s where the most lucrative rewards are. You can play a Speed race solo or with a team, as well as team Item race. Ranked works much the same as it does in any mobile game with a similar mode. The more you win, the higher you climb in the rankings. The higher you climb, the more rewards you collect. The ease with which you can increase your ranking is tantalizing; particularly during the early tiers. 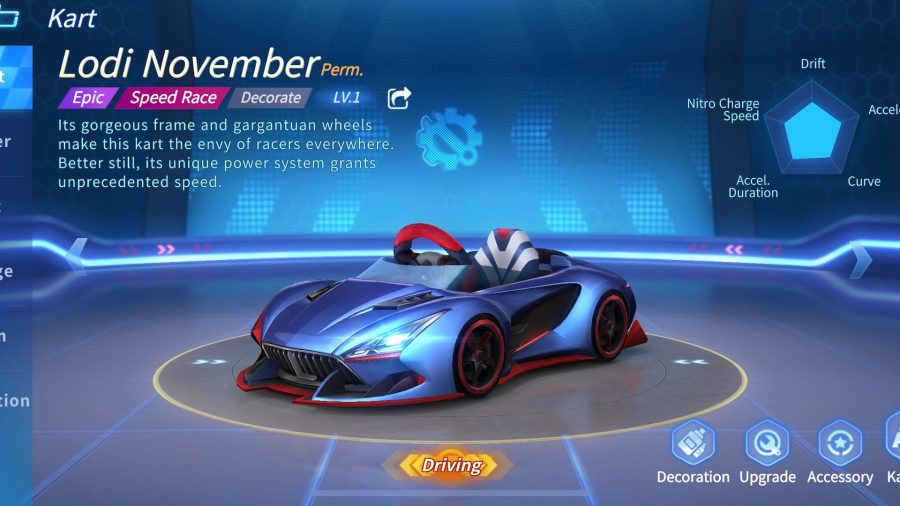 The wealth of content on offer isn’t always a plus though, and there are a load of additions that feel quite unnecessary. Each time you login, you’re greeted with a ton of buttons with that all-too-familiar red dot signalling that there’s a new thing to click on. It’s actually quite off-putting, and just serves to give you a sense of FOMO, which kills your enthusiasm to play. All we really need are daily challenges and the occasional event, Nexon.

You can say the same about the Home feature, which allows you to build your own space to chill in between races. We’re sure many of you will enjoy it, but it feels a bit out of place and a lot of the challenges associated with it, including parking at other people’s homes, are dull, quite frankly. We don’t know about you, but we came here to race, not make house.

There are similar issues with the monetisation, with an overabundance of subscriptions. There’s a Deluxe Pass, which costs $2.99 (£3.99) and provides various temporary and daily rewards, including a bunch of exclusive cosmetic effects, discounts, and daily batteries, the premium currency. Then there’s the season pass, which lasts about two months and costs $4.99 (£4.99), and an additional pass for deluxe perks, which provides you with daily premium currency over a 30 day period. That costs $8.99 (£8.99) per month. All of these passes add up to around $16.97 (£16.97) every month, which is substantial. 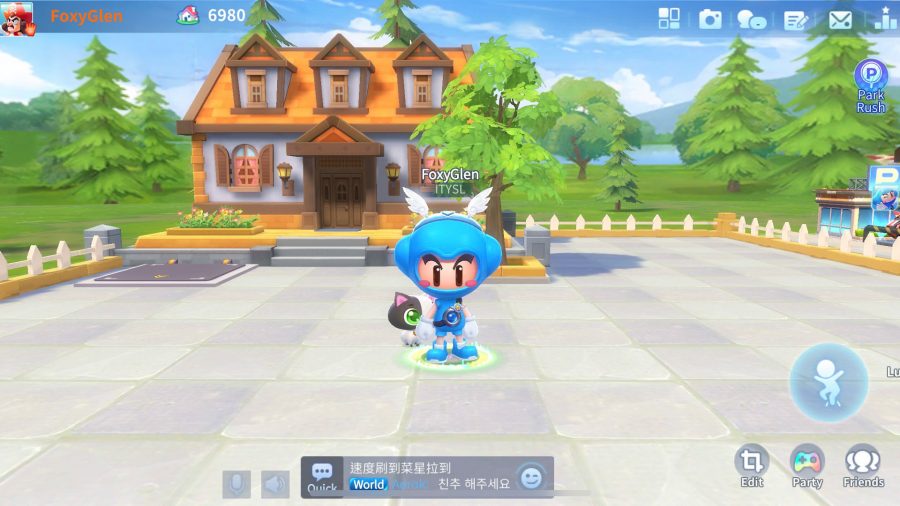 However, you don’t need to purchase any of them if you don’t care about cosmetics. Nexon has actually been quite clever in avoiding pay to win issues. You can upgrade your character and kart’s stats, improving your performance in races, but you can’t simply outright purchase the currency required to do so. We know because we’ve just tried. KartRider Rush+ pointed us towards the activities we could perform to earn them instead.

This is quite refreshing, as it both encourages you to play more and means that skill, and frequent play, are the determining factors in a race, rather than just spending money. The latter simply provides you with an absolute ton of cosmetics, including racer outfits, karts, pets, balloons, accessories, and shiny effects for show-offs, like auras.

One last point we’d like to make is that the social features are really well-integrated, though quite full of bugs at this early point. We tried adding a friend using player search and just couldn’t get it to work. We searched their name and player ID to no avail. We had to go to the length to set up a Club, which is basically a guild, just to find each other. That’s ridiculous. However, once you are friends it’s really easy to invite each other to a race, hang out at your respective homes, and chuck gifts at each other. 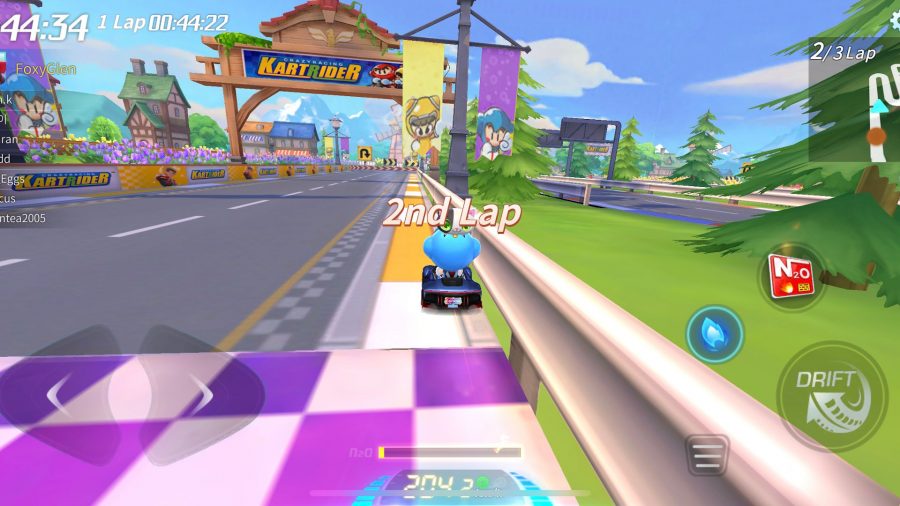 Overall, we’re really impressed with KartRider Rush+. Like Mario Kart Tour, it’s not without its faults but, unlike Mario Kart Tour, it’s a feature-complete racer at launch, and provides all of the multiplayer shenanigans you want right out of the box. Skill is also the deciding factor when it comes to racing, which is refreshing to see; particularly in a game with such aggressive monetisation like this. Fortunately, those microtransactions are limited to cosmetics, which are entirely optional.