One of the most important choices you have to make in Star Wars: Knights of the Old Republic 2 is the type of character you’re going to play as. There are three different potential starting classes to pick from. And because the game is a massive RPG, there’s a lot to consider when you’re building that character.

And that’s why we’ve written this guide. We’ve broken down the three Jedi classes you pick at the start of the game and tried to explain how to create the best build possible for each of them. We’ve taken a good long look at the attributes, skills, and feats that you should focus on getting as soon as you possibly can.

We’ve even taken the time to consider which prestige class is the best to aim for when you hit level 15, and whether you should focus on the light or dark side of the force. Basically, there’s everything you need here to make sure you’re playing Knight of the Old Republic 2: The Sith Lords as the most badass Jedi or Sith you possibly can.

The best Kotor 2 builds for each class:

The Guardian is all about combat. When you’re building one you should think about focusing on Strength, Dexterity, and Constitution. Look at your Wisdom too, since that’ll help with your force powers. Get the Dual-Wielding feat, and focus on maxing out the Flurry feat. Burst of Speed is a great Force Power to work towards as well. Don’t worry about support powers for your main character, but no make sure you give them to the NPCs in your party if you choose a Jedi Guardian.

Still on the fence? Check out our Star Wars: Knights of the Old Republic 2 mobile review to get our full thoughts

The Sentinel is sort of a jack-of-all-trades, a bridge class between the combat focus of the Guardian and the Force focus of the Consular. They’ve got a decent class feat that diminishes the effects of attacks that cause fear or stun your character. Aim for a balanced set of attributes, and a mix between combat and support feats and powers. 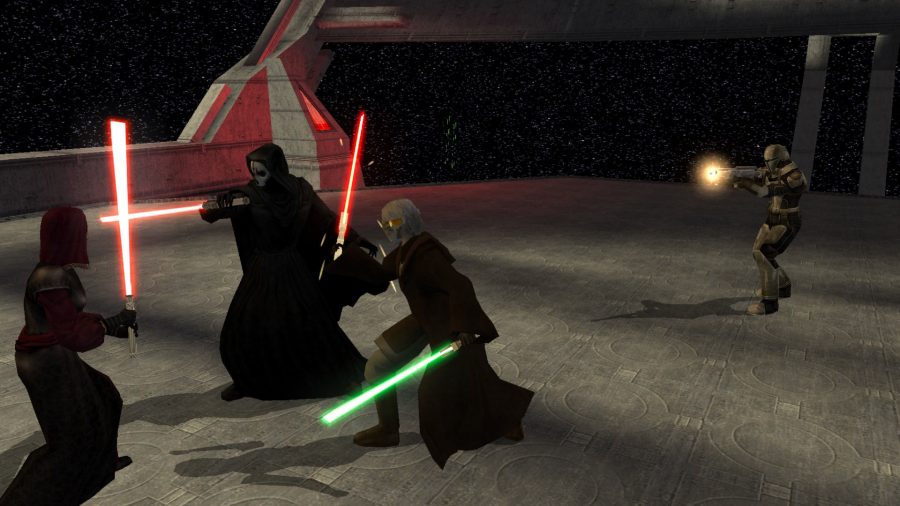 This is the character to pick if you want to focus on Force powers over combat. They’re going to get Force Powers on a regular basis, and get more Force Points to spend on them as well. Focus on Wisdom, Dexterity, and Constitution points. If you’re focusing on defensive powers, it’s a good idea to keep on the light side of the Force, but if you want to use offensive powers, you should definitely be a dark side jerk.

When you hit level 15 you can pick a prestige class. There are six of these – three light side and three dark side. You don’t have to pick one – in fact if you’re a Jedi Consular you might want to stick with what you’ve got. For the other two classes, you should pick either Jedi Weapon Master or Sith Marauder. You’ll get a massive boost to your combat skills, while still getting plenty of Force Powers to use.

Light side or dark side?

Really, this is a question for role-playing. Light side characters get more defensive powers, dark side get more offensive powers. If you want to get Force Storm, the most powerful attack in the game, then you’re going to have to go dark side. If push comes to shove, we’d say dark side is more fun, but it’s a hard choice to make.