Lego Star Wars Battles is a real-time strategy game that pits you against other players, as you attempt to prove who is the mightiest commander in a galaxy far, far away. I think it goes without saying that this game is worth considering if you happen to be a fan of Star Wars – and let’s face it, there are many fans of this sci-fi franchise out there.

The LEGO Star Wars games on console are some of the most entertaining pieces of media out there, so it’s only natural to be curious as to whether or not that transitions well to mobile. So, aside from it being a LEGO Star Wars title, which in itself is reason enough to play it, let’s address the biggest draw of this game. Other than the obvious, the main mechanic that’s likely to entice you in is its PvP elements, given that its entire premise is going to war with other players.

So, how does LEGO Star Wars Battles stand out on a platform that already has plenty to offer when it comes to competitive PvP goodness? Well, it puts you in charge of a squad that features a range of troops, including stormtroopers and rebel alliance soldiers, all from the Star Wars universe, and it includes plenty of fan-favourite characters – so, on that front, it’s quite appealing.

The mechanics of the game are simple. It operates with a drag and drop system to deploy your troops. Doing so costs energy, and that is where strategy comes into play. Sure, your energy regenerates over time, but that isn’t going to do you much good if the troops you have already sent out can’t hold their own. To give yourself some extra defence, there’s the option of building towers after enough of your troops have entered the battlefield. Of course, you don’t have to take a defensive approach. Personally, I’m a highly aggressive player. It’s all or nothing, so I tend to lean more towards attack – offence is the best form of defence, after all. 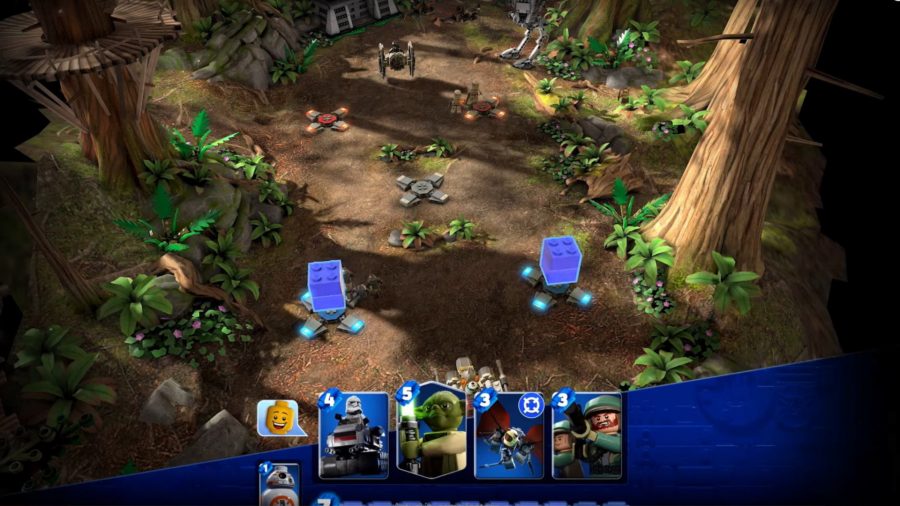 To win a battle, you need to destroy your opponent’s base. Of course, this is often easier said than done depending on who you’re facing and what their skill set is like. Therein lies one of my complaints; the game can vary in difficulty, and that relies entirely on the strength of the opposing player. Yes, this is a pretty standard occurrence in PvP games, and it is a common complaint of mine. Should neither of you succeed in destroying eachother’s base, the winner is determined by medal count, which you earn through constructing towers.

Graphically speaking, the game certainly looks the part, no need to worry about offending your eyes with this one. The mobile platform is risky when it comes to the aesthetics of games. Some look beautiful, to the extent where you could mistake them for a console game, while others leave much to be desired. LEGO Star Wars Battles definitely falls into the first category.

Overall, LEGO Star Wars Battles is a fun experience for Jedi, Padawans, Siths, and Stormtroopers everywhere. There are times where you will feel victory came too easily, but treasure those moments, for, at some point, your base will crumble around you, which serves as a good reminder that you’re not invincible. Now go on, go, and may the force be with you.

While the game will win now awards for innovation, it takes the tower defence and real-time strategy genres, and turns them into a fun experience for Star Wars fans everywhere. Even if victory proves to be too easy at times.