Not only that though, but the best Marvel Future Revolution Captain America build causes his attack to increase along with his defence, meaning he’s not too shabby at dishing damage back. Couple that with an ultimate that hits like a truck, group buffs that help keep everyone alive, and the ability to self-heal with every attack, and it’s kind of hard to find a good reason not to play Cap.

Well, aside from the fact that he’s only one of two heroes that doesn’t fly. It’s kind of a bummer running from boss-to-boss while your allies soar through the skies. Still, if you’re determined to take up the shield, we’ve put together an excellent guide to the best Marvel Future Revolution Captain America build, including a breakdown of his skills, and the best outfits, badges, omega cards, potential, specialisations, and more.

Before we kick off, I’d like to credit the excellent TonyBingGaming, whose guide series on Marvel Future Revolution is well worth a watch.

The channel really knows its stuff, and we’ve dropped a video to the super-helpful Captain America video below. Make sure to like it and subscribe to the channel for future content on MFR. 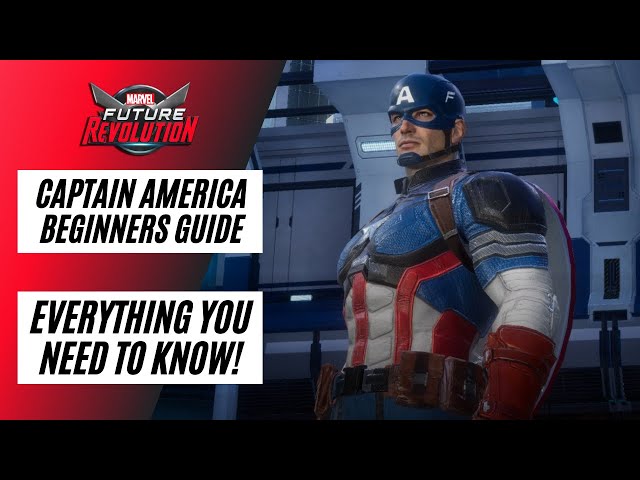 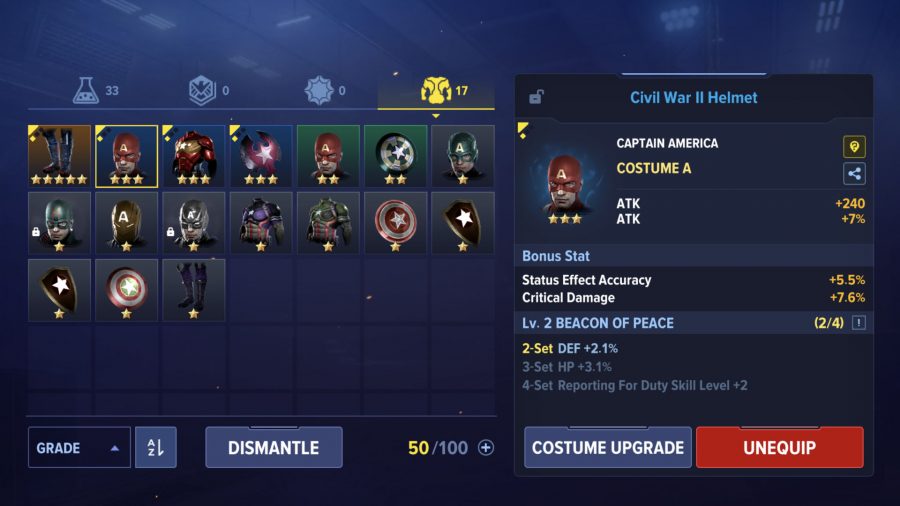 Given that you have to do the time for your endgame outfit, we’re going to split our recommendation into levelling and regional. That way, you can still perform well while levelling.

It’s going to take some time to get your endgame set (see below) so it’s worthwhile levelling a set separately while you work your way to max level. It’s not even a waste of resources, as you can use it as fodder to enhance your endgame set when you get it.

The set we’d highly recommend using as your levelling set is World War II, which boosts Sentinel of Liberty, the best Vibration Release skill. In fact, given that this is the exact bonus you get from the regional set, minus the flexibility to use other Vibration Release skills (which you won’t anyway) means you don’t necessarily need to upgrade from this to your regional if you don’t want to.

When you’ve hit the level cap, you generally want to get your hands on a regional set, which is themed on one of the five locations you visit while levelling in Marvel Future Revolution.

Captain America’s best is undoubtedly the Midgardia set, which boosts your most powerful Vibranium Release skills. This is where the bulk of your non-ultimate damage comes from.

Having said that, New Stark City is no slouch. Cap’s ultimate is one of the most powerful in the game, and having an additional six levels is non-too shabby. Bear in mind, that you don’t use your ult as much as your Vibranium Release, so you’ll probably get more mileage out of Midgardia. 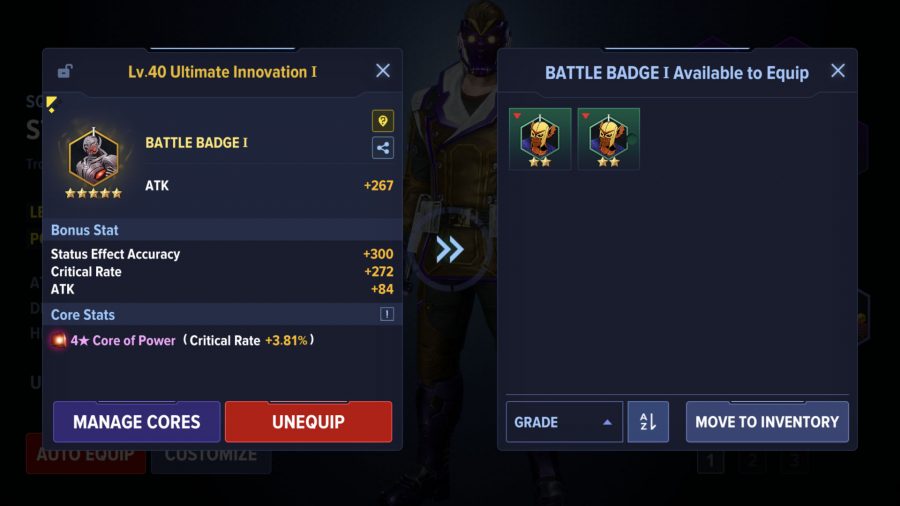 While levelling, Badges are an easy choice: use the highest-levelled ‘Blitz’ set that you currently have available to you. Just in case you’re unaware, Blitz is a team mode that pits you against various Marvel bosses, and rewards some incredible badges for defeating them.

As soon as you access the Dark Zone though, you’re going to want to focus on a particular Badge set. We recommend the following:

Universal Domination is, without a doubt, the best for Cap, as he gets a boost to attack based on his defence, and is generally right in the thick of battle, so could really use the defence.

Having said that, support specialists could consider Towering Tyrant, which will boost the barrier Cap and his teammate’s receive from Captain’s Patience.

Lord of the Desert is for those that just want to go full attack Cap, while Omega War is a great set for PVP enthusiasts.

The Omega Cards set you aim for is dependent on how much you plan to spend in Marvel Future Revolution. Omega Cards are an enormous money sink though, as you have to pull for the sets gacha style. As a result, we don’t recommend doing this, and would instead opt for some of these terrific F2P sets below.

Some nice options here, and you can’t really go wrong with any of them. Midgardia #4 is a nice, balanced set that boosts your damage, defence, and HP, alongside an enormous boost to CRIT DMG, which could result in some crazy Ultimates and Vibration Releases.

Hydra is purely about boosting your core stats, while also giving you a small improvement to cooldown speed, while New Stark City #2 is a really interesting option that gives you a lot of defence, which translates into damage, while also enormously boosting the damage you deal to bosses.

Dark Zone #3 is possibly the optimal set for endgame PVE though, providing an absolutely insane boost in damage. It does lack the defensive bonuses from other sets though, as well as a HP boost.

Specialisations unlock at level 70, and provide you with a series of talents that you can equip to alter the way that you play as Cap. There are three trees with four talents each, and you can only equip four of them at once:

The talents we recommend everyone use include:

This gives you incredible passive heal, and an enormous boost to attack damage – particularly against opponents suffering from bleed.

As for your final spot, you’ve got a few options. Regroup is great for builds that use a low-cooldown Vibration Release skill, while Unyielding Will and Situation Assessment are great niche options for really challenging situations.

Bravery is a great option for those looking to add more damage to their build, though we’d recommend primarily using it when not on auto-play. This means you can time your Ultimate or Vibration Release to benefit from that 30% DMG boost. Finally, when soloing or auto-playing, Charisma is a nice talent to slot in for a passive DEF increase. 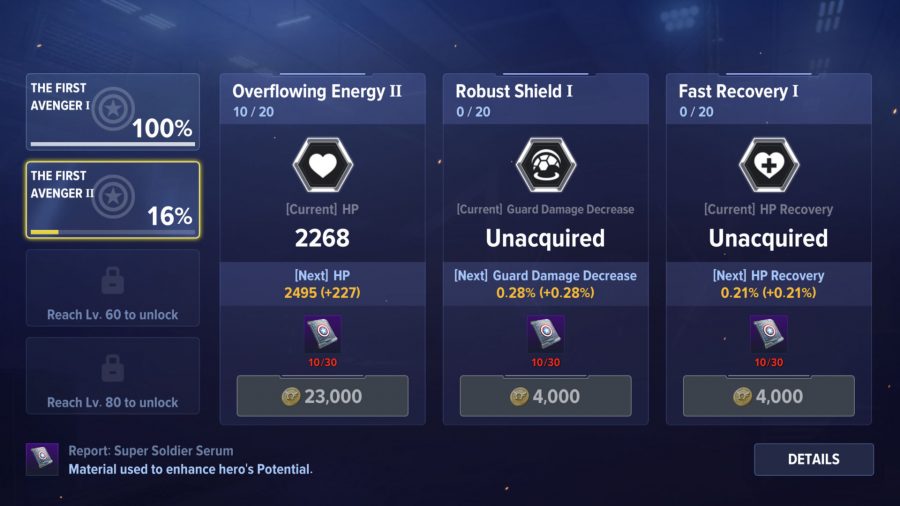 The potential system provides you with access to an instant stat boost for Cap, and is pretty straightforward in how we build it. Technically, you can max out Cap’s potential, but that would require throwing lots of real cash at the game. This might change in time, if Netmarble provides us with easier access to reports, the currency used to upgrade potential, but right now it’s in short supply.

Basically, you want to boost your three core stats:

And now we come to the section you’ve been waiting for: the build itself. Here’s everything you need to know in a simple table.

And there we have it – everything you need to know to build the perfect Captain America.