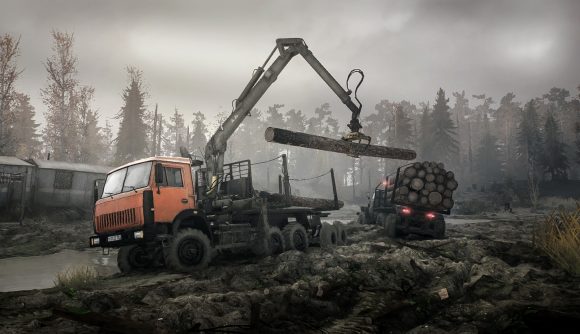 MudRunner, the highly successful off-road driving game, has released its mobile port on Android and iOS. MudRunner Mobile takes what made the original game so popular, as you transport deliveries between destinations, using a wide array of vehicles and any means necessary to traverse treacherous terrain. MudRunner Mobile boasts 16 all-terrain vehicles and 15 open world maps for you to get messy in.

For those that don’t know, the first MudRunner, originally called Spintires: MudRunner, is developed by Saber Interactive and was released back in 2017. Since then the series’ iconic off-roading and realistic physics has found huge popularity with audiences, and even spawned further spin-off games like SnowRunner. We’re excited we can now enjoy the game’s all-terrain craziness on mobile.

MudRunner Mobile will be available to purchase sometime today on both Google Play and the App store. The original MudRunner also has multiplayer and co-op, but there’s no mention that either made the transition to mobile on the game pages. But that doesn’t mean you can’t still enjoy tearing it up through wilderness – we know we will!

If you want to get a glimpse of what MudRunner is like, you can watch the release trailer below:

So if driving around the wilderness getting high octane and messy is your idea of a good time, be sure to check MudRunner Mobile!

If you’re also looking for some other great mobile car games to play in the meantime, be sure to have a look at the ‘Racing’ sections in our lists of the best Android games and the best iOS games.