My Talking Tom Friends might not be the first game you’d normally reach to when looking for something new to play, but you certainly won’t regret your time with it. It’s a perfectly charming Sims-lite that has enough heft to it to appeal to the parents of kids who’ve had it foisted onto them to keep them quiet in the backseat of the car.

Make no mistake though; this is exactly the game you think it is. You collect a bunch of talking pets, dress them up in ridiculous costumes, and help fulfill their needs in terms of health, hygiene, and play. But the level of polish, quality, and attention to detail on display helps elevate My Talking Tom Friends above the hordes of Tamagotchi-style experiences already available on the App Store.

It’s also heartening to see that it doesn’t lean heavily on predatory free-to-play practices that would see kids emptying their parent’s wallets faster than you looked away in disgust when you first spotted the icon on the App Store. While it’s true that there are plenty of ways to spend your money, none of it is essential, and spending is not obnoxiously shoved in your face at every opportunity.

But let’s talk about the game itself. My Talking Tom Friends is basically a Sims-lite. You play as the caretaker of a house in which a bunch of pets live in perfect harmony, and your role is to keep them happy and healthy. We’re not entirely sure how much you can actually fail at either of these goals, but you certainly can excel in them.

Starting with just series frontman Tom, you’ll periodically collect a bunch of recognisable furry faces, like Hank, Angela, and more. There doesn’t appear to be a rhyme or reason for unlocking new pets. They just sort of turn up as you play, providing you with another ridiculously hungry mouth to feed.

The core of the game involves scrolling left and right across the 2D house, ensuring that all of your pets are busy and happy. If a pet isn’t busy, you can either assign them something to do, which includes menial chores like cooking and cleaning, playing with toys, or taking a bath. 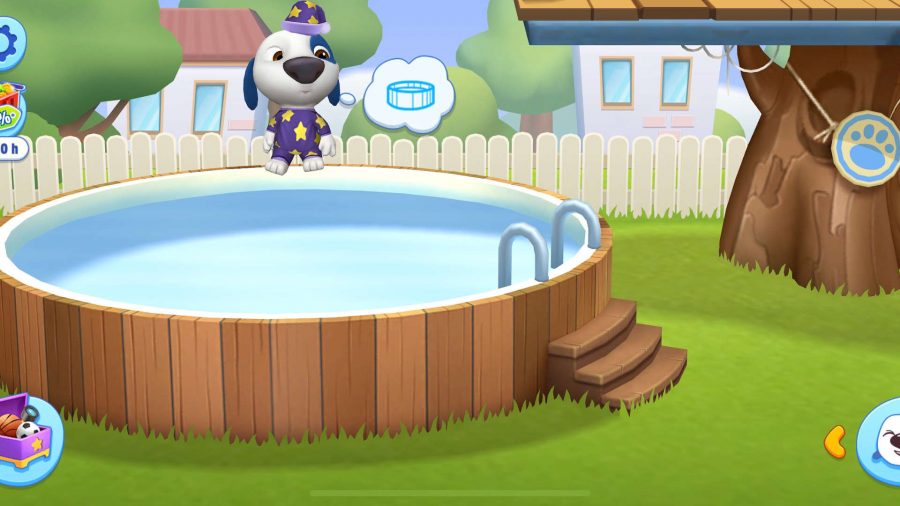 Each pet does a pretty good job of letting you know what they want to do in any given moment thanks to a handy thought bubble that appears above their heads. This will display a picture of the object or pet that they want to interact with, and you simply have to drag them over to it with your finger, and release with the pet hovered over it.

Lots of effort has gone into making this process as easy as possible, too. You can simply tap on the thought bubble to teleport your pet right over to the object, and a handy button on the bottom right of the screen allows you to quickly scroll through your pets to see what they need, rather than constantly swiping back and forth across the house.

My Talking Tom Friends is a highly-polished experience that's charming and harmless, with loads of attention to detail

Need is an operative word here, too, as your pets do need to sleep, eat, bathe, and go to the toilet on occasion. This is usually displayed in red, denoting the urgency of the action, but the same rules apply as earlier. Drag your pet or tap on the thought bubble to get them over to the thing that they want to interact with. 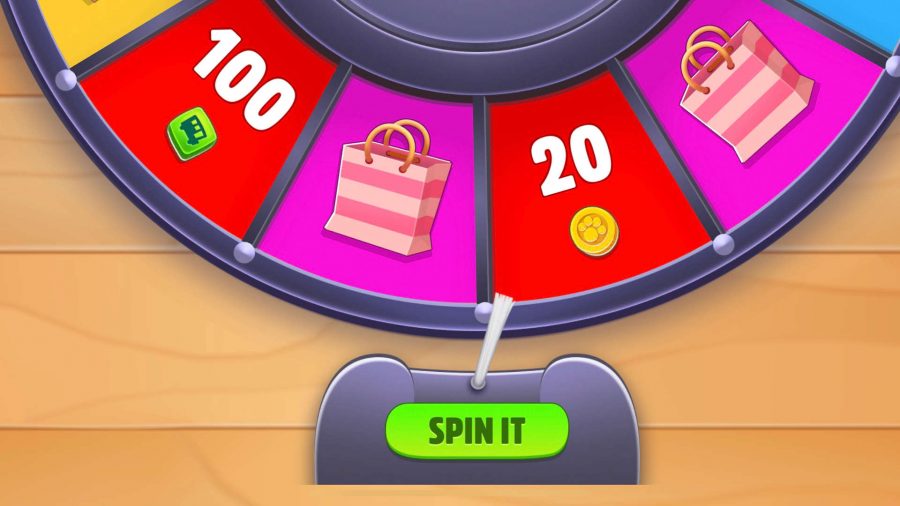 As we mentioned earlier, we’re pretty sure you can’t fail at any of this, and that your pets aren’t in any real danger of death, soiling themselves, or illness. Well, the latter isn’t entirely true, as your pets can suffer from hiccups, splinters, and other ailments that you’ll have to deal with in very bizarre ways. For example, one of our pets was dizzy, and the cure was to bash it over the head with a plastic mallet repeatedly until the dizziness went away. We’re pretty sure dizziness doesn’t work that way, but we’re no doctors.

But what’s the point in all of this? Well, to collect lots of stuff, of course. There are costumes to dress your pets in, new toys for them to play with, and new furniture and decorations for your home. You unlock this stuff in numerous different ways, though it all pretty much ties into the same thing: keeping your pets busy.

As your pets interact with each other and the toys and objects dotted around the house, they’ll improve their skills in numerous different areas, like creativity, sports, cooking, and more. Each of these skills has three star ratings that you can improve each pet in, unlocking new costumes and items as the stars increase. 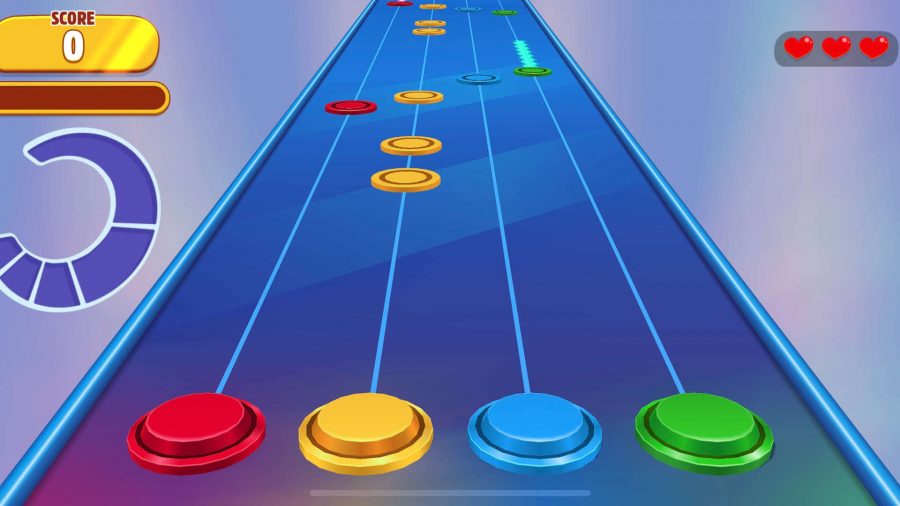 You’ll also unlock a currency that allows you to go on a road trip each time your pet finishes an activity. Road trips allow you to visit a nearby store to get your hands on some free goodies at random, so it’s worth going on these as often as you’re able. If random stuff is your bag, you can also watch as many ads as you want to spin a wheel, which gives you a free reward each time.

Of course, you can also just purchase whatever you want using real cash, though it’s not as greedy a system as you might think. For a start, you can earn gold, the premium currency, just by playing, and you get enough to progress at a solid pace. Besides, it’s not like anything you can unlock is essential. It’s primarily cosmetic in nature, so you never really feel the need to spend.

At this point, you probably know whether My Talking Tom Friends is the game for you. Heck, you probably made that decision the moment you first glanced at a screenshot on the App Store. We’d encourage you to suspend your disbelief and give it a shot though, because it is a highly-polished experience that’s charming and harmless, with loads of attention to detail. We love the little animations pets do when they’re tired or hungry, and we love how they try and sneak off-screen when you pan the camera over them, like they’re up to no good. There are a bunch of little touches like this that help to make the game feel more alive. 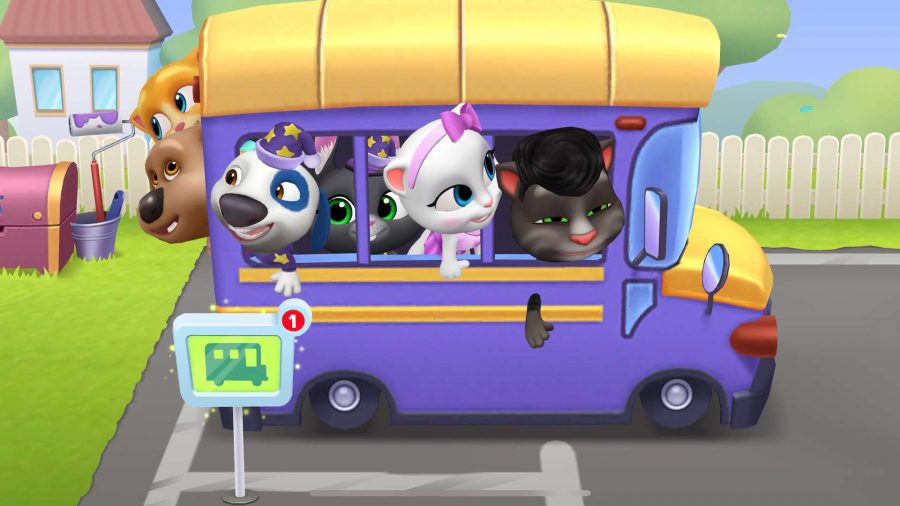