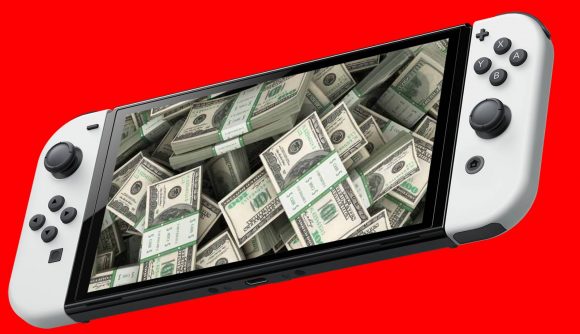 After Nintendo revealed the Switch OLED model with an increased price of £309/$349, rumours began to swirl that the OLED screen was a minimal price increase for Nintendo, so the new model would yield higher profits for Nintendo. This was originally reported by Bloomberg, who broke down the cost of each individual part based on estimations of similar tech, and claimed that Nintendo was increasing the price beyond the price of the individual new components. The quote from Bloomberg reporter Takashi Mochizuki’s article reads

“The new Switch’s 7-inch OLED display from Samsung Display Co. costs an additional $3 to $5 per unit, according to Yoshio Tamura, co-founder of industry research firm DSCC. Increasing the internal storage to 64GB is a further $3.50, according to Omdia’s Akira Minamikawa. The other added components, such as the new console stand and LAN port, are thought to add a few dollars more. Nintendo has been selling the Switch at a profit since its launch.”

Early this morning, however, in a fairly unusual amount of transparency from Nintendo, they tweeted out a clarification. The tweets read;

“A news report on July 15, 2021(JST) claimed that the profit margin of the Nintendo Switch (OLED Model) would increase compared to the Nintendo Switch. To ensure correct understanding among our investors and customers, we want to make clear that the claim is incorrect. (1/2)”

Nintendo then continued to stomp on the dreams of fans with another clarification, as they were already squashing rumours. The second tweet reads;

“We also want to clarify that we just announced that Nintendo Switch (OLED Model) will launch in October, 2021, and have no plans for launching any other model at this time. (2/2)”

A news report on July 15, 2021(JST) claimed that the profit margin of the Nintendo Switch (OLED Model) would increase compared to the Nintendo Switch. To ensure correct understanding among our investors and customers, we want to make clear that the claim is incorrect. (1/2)

So, in just two tweets Nintendo has dismissed any rumours that the Nintendo Switch OLED model price increase is yielding a much higher profit margin, and any idea of another model of Nintendo Switch coming anytime soon. Now what will the Nintendo fans talk about for the next year? Is it time to start up fresh Metroid Prime Trilogy HD rumours again?