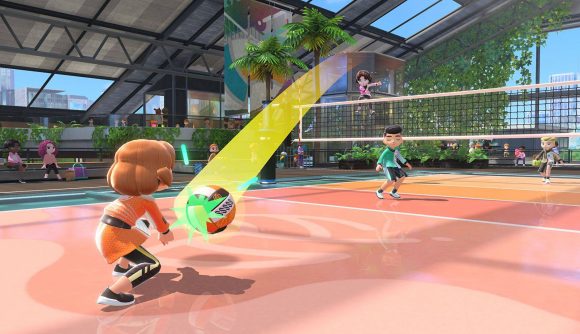 The upcoming Nintendo Switch Sports already looks pretty great in the footage we’ve seen so far, and now it appears there’s a good reason for that. A data miner known as NWPlayer123 has found something within the user agreement for the title that reveals Nintendo is using AMD’s FidelityFX Super Resolution upscaling (information found via My Nintendo News)

If you’ve heard of Nvidia’s DLSS upscaling, this is a similar concept, except instead of needing propriety hardware and outputting 4K, it can run on the current Switch (and most other hardware) thanks to very cleverly engineered code. It effectively allows games to run at a lower resolution so they can run at higher framerates and then uses math to predict what a higher resolution version of the image would be and produce it. So, what does the Nintendo Switch Sports upscaling mean?

This is the first time Nintendo has used this technology, but it could certainly use similar techniques in the future to ensure titles look and run admirably on the ageing Nintendo Switch software. As we continue to wait for any hardware improvements or successors, this is an effective bandaid that helps Nintendo’s first-party offerings to keep up graphically with the competition.

You can find the discovery by data miner NWPlayer123 below.

If you’re looking forward to Nintendo Switch Sports, be sure to also check out our guide to the upcoming new Switch games you can look forward to playing in 2022.