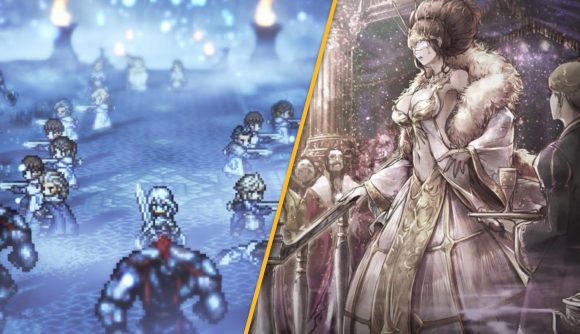 Square Enix is one step closer to releasing Octopath Traveller: Champions of the Continent with a new trailer and release window. The mobile-exclusive title works as a prequel to the Switch game, with the glorious HD-2D graphics headed to an even smaller screen. For those who really can’t wait to get back into the world of Octopath, there’s a closed beta coming too.

Taking place in the Orsterra region from the previous title, the Octopath Traveller: Champions of the Continent trailer picks up its narrative a few years before the events of the predecessor. From what we can see so far, it doesn’t look like the developer has compromised on either the deep JRPG battle mechanics, or the spectacular pixel art design, which is pretty impressive for a mobile title. It shows just how much Square is looking to push into mobile markets, too, especially with the Final Fantasy Pixel Remaster series having recently concluded.

If you’re one of the many fans eager to participate in the closed beta test, it’s easy to apply. Head to the Google play store and pre-register to put yourself forward as one of Square Enix’s international guinea pigs, before the full game launches. There’s no cost associated, and you’ll be one of the first in the west to experience the expansion of the Octopath world and lore.

When is the Octopath Traveller: Champions of the Continent release date?

We still don’t have an exact date, but we can expect a summer 2022 drop for Champions of the Continent thanks to this trailer and some rumblings from Square Enix. The game has been out for a few months in Japan already, so Western audiences are keen to catch up as soon as they can with all things Octopath. Hopefully, there isn’t too much longer to wait.

The HD-2D RPG experience you’ve been waiting for is finally arriving to mobile devices.

Sign up for the OCTOPATH TRAVELER: Champions of the Continent Google Play Closed Beta now!

OCTOPATH TRAVELER: Champions of the Continent will be launching in Summer 2022! pic.twitter.com/ldZJ6CVlo0

If you loved the first Octopath Traveller game, be sure to check out our Triangle Strategy preview, as we look ahead to the next Switch title from the Octopath team. Or, if you’re looking to prepare your strategic skills for these upcoming tests, why not check out our list of the best Switch strategy games.