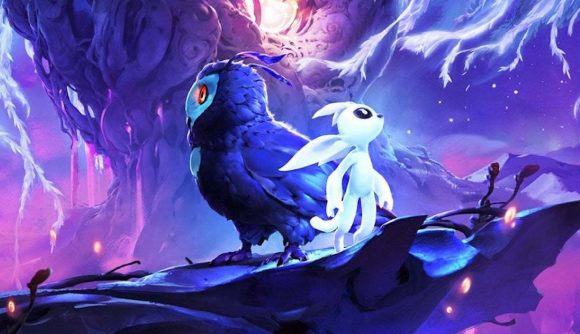 Skybound Games, in conjunction with iam8bit and Moon Studios, has announced it is releasing Ori The Collection. The package will include both Ori and The Blind Forest, and Ori and the Will Of The Wisps both on one cart, as well as two digital soundtracks, and six collectible cards.

The previously Xbox-exclusive Ori games are Metroidvanias, where you play as the titular Ori who makes their way through luscious greenery and heavily detailed environments, unlocking new abilities and attacks as they go. They both released to critical acclaim on Nintendo Switch, with the ports being praised for maintaining incredible visual fidelity and high framerates.

Iam8bit also revealed they are restocking the beautiful Ori Collectors Edition including a ‘premium transforming display box’ as well as exclusive reversible sleeves, a collectible art card set, digital downloads of both of the soundtracks, and many more exclusive items. The collectors edition will cost $149.99, with pre-orders live now for a release later this year.

Skybound hasn’t announced a release date for Ori The Collection, though the announcement stated that preorders will open soon.

Back by popular demand, the Ori Collector's Edition for Switch will return for pre-order ✨ TOMORROW ✨ at 9am PT!! pic.twitter.com/IpwdniRza5

In the meantime why not check out the best Nintendo Switch games from this July to keep you entertained until Ori arrives.