Picross is an old grid-based family of logic puzzles, rather like a cross between the games of Sudoku and Minesweeper. You fill in boxes to create a ‘pixelated’ image based on the numbers marking each row and column. A five in a row means there are five filled boxes, one right after another. No more, no less. The rules are simple but the consequences definitely aren’t. Picross had a fair amount of mainstream success over a decade ago when it became part of the Nintendo DS’s large and diverse catalog (while popular, it never had the breakout appeal or sales of say, Nintendogs).

It’s always been a solid option. By adding a generic fantasy theme filled with magical potions, a standard bestiary and youthful heroes, PictoQuest attempts to give Picross a face-lift. It tries to give a great puzzle form some pizazz to lure in new players. Reader, even for a puzzle-lover (if that’s you, you’ll find plenty to keep you busy in our best mobile puzzle games guide), the results are mixed at best. PictoQuest is a mashup of many conventional videogame ideas shoe-horned into a classic puzzle format. It’s pleasant enough and mildly challenging for newcomers, but ultimately derivative.

The game is structured around short levels with different enemy types. If you were just looking at screenshots, you’d be forgiven for thinking this was an RPG, or at least RPG-inspired, like PuzzleQuest was. There are health bars for both you and the foe, but they are false symbols. A match is over when the picture is complete, and the enemy is KO’d. No more, no less. If an RPG is what you’re looking for, we’ve got you covered in our best mobile RPGs list though.

For your trouble, you get a little gold after each level. Any mistakes or long pauses mean the enemy attacks you, depleting your health bar. So in PictoQuest both speed and accuracy are important, which makes for a stressful learning environment. A little focus and concentration can make for better puzzle solving, but the real-time pressure can actually incentivise leaps of logic and deductive guesswork, which are punished by the skimpy, three heart health pool. Picross should be about the sure thing, the iron lattice of logic. PictoQuest can be beat with hectic tapping, magic items, and repeating a level over and over to just imprint the unchanging image grid on your brain.

The game’s different regions have pretty decent difficulty scaling, in terms of the raw complexity of the puzzle grids themselves. The purist approach dictates that logic puzzles should be approached methodically with an eye for chains of consequence. If a column says ‘8’, then the centremost six spaces must be filled. Most progress is made through the process of elimination, marking ineligible spaces X to narrow the field of possibilities. It’s the thrill of a crossword, or Sudoku, or any other activity where a mind can observe a pattern at work and unravel its consequences.

There’s the vast wasteland of the empty puzzle at the very start, the slow build towards minor clues and victories, then as momentum peaks and the final few holdouts fall into place. Not exactly your typical gamer rush, but still a respectable and perfectly fun activity.

PictoQuest can be beat with hectic tapping, magic items, and repeating a level over and over

The puzzles themselves have been well-selected and ordered, so the fancy ones come a great deal later. This smooth curve is undermined by the fact that the actual game mechanics are counter-intuitive and distracting. There’s plenty of stick and little to no carrot.

It’s like asking someone to do as many push-ups or squats in sixty seconds while turning a blind eye to their position and form. It encourages sloppiness and creates cognitive dissonance by tasking the player to improve at every metric simultaneously. Bosses will have progressively weirder twists and hit harder while the puzzle grid gets larger and the hints get less generous.

It’s an ambitious challenge, but one that never actually feels hard. It creates obstacles and inconveniences rather than honing and refining the primary mechanic, and for this reason alone, PictoQuest is a letdown. 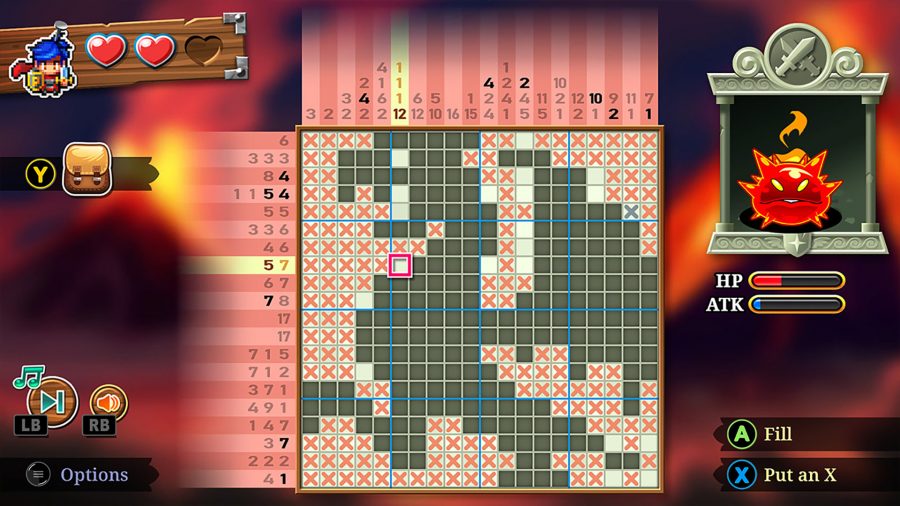 To enliven things, one-time consumable items can reveal tiles, restore hearts, or freeze enemies, for a small gold fee. The game has no other tools to ameliorate the challenges it has set: it’s purely sink or swim. I can get behind a tiny set of rules; in the right circumstances it’s actually fantastically liberating (see Miracle Merchant), but here the bonus effects feel hokey and tacked-on, as if someone tried to take a dollar-store puzzle booklet and make it come to life with the most hackneyed of video game tropes: a quest to save the kingdom. The fantasy theme and magic mechanics are merely window dressing, but also manage to be irksome and invasive.

There’s no great injustice in this. It’s not as if Picross puzzles are some holy grail, the pinnacle of the form which will tolerate no bastardization. Puzzles and high fantasy settings aren’t strange bedfellows by any means (see Puzzle Quest and Might & Magic: Clash of Heroes). But the limited gameplay makes the bare-bones nature of Picross puzzles feel a tad dated. For example, because each level is just a static layout, it could be brute-forced with a good memory and multiple failed attempts. It’s like two fun things decided to merge together haphazardly and the result is worse than either half separately. 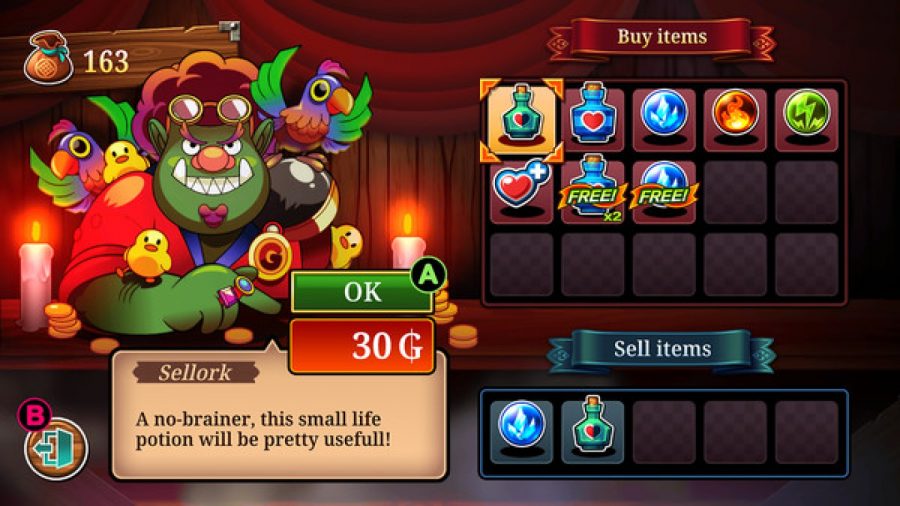 The visuals are clean and bright, and the UI is nice; especially the greyed-out effects used to update the hint sections of the puzzle as they’re completed. The music strikes a clean balance between dynamism and peace; somewhere halfway between a battle theme and elevator music. That, along with the note-taking system make for a thoughtful digital Picross experience; if only PictoQuest would stop pinging my character’s health bar. It also has critical hits and misses, for some god-awful reason that is devoid of any informed statistics or player input.

PictoQuest is ‘gamey’ like microwaveable food is a meal: only just enough to do in a pinch, but never to be praised beyond the fact it is quick and cheap. Its sole saving grace is that all the gimmicks and stylish distractions are built upon a rock solid core of Picross, and the pixelated images do have some retro gamer appeal, if you’re feeling nostalgic or indulgent. Still, taken altogether, it’s a mightily mediocre experience, so in all honesty unless you’ve been craving this particular brand of puzzle, just stay away.

This may have been something on Nintendo consoles, but it has far stiffer competition on mobile. Not the best.