Finally, after waiting for what feels like forever since its initial announcement, I got my hands on Pokémon Legends: Arceus. It’s fair to say that this is my most anticipated Pokémon game in more than two decades. You see, I’m a massive fan of the ‘mon, and never miss a game. I always look forward to the release of a Pokémon game. Be it a brand new entry, or revisiting a former game with a remaster, I’m always here for it.

However, Pokémon Legends: Arceus had me excited on a whole other level. As not only is it a game that belongs to one of my most beloved franchises, but it also ups the ante in the RPG department, which happens to be my favourite genre. Therefore, naturally, this open-world journey draws me in, but does it grip me? Do I lose myself in this adventure, so much so that I lose the concept of time? Why yes, it does.

I have no problem admitting that this is the Pokémon game I’ve long been waiting for. It’s a natural evolution for the series, one that takes the franchise in an exciting new direction. Don’t get me wrong, I’ll always love the traditional style, gameplay, and mechanics of conventional ‘mon games, but Arceus opens up a world of possibilities, and this excites me to no end. So, let’s dive in and discover what it is that makes this outing so special.

For starters, you begin the game by falling from a portal in the sky. What an entrance. Like my virtual protege, I was confused, bewildered, and in awe. I’m hooked from the second I land on that beach, even if in that moment it’s purely so that I can get some answers for what just occurred. 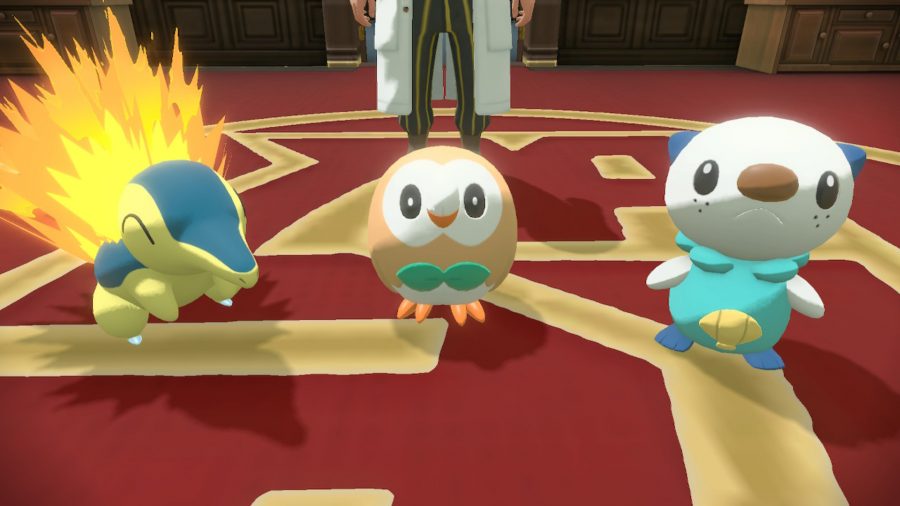 Here’s where you meet the professor of Pokémon Legends: Arceus, and this time, it’s Professor Laventon. Your journey begins with helping him catch three Pokémon – Cyndaquil, Rowlet, and Oshawott. I knew that these were the starting Pokémon going in (we all knew, right?), and my decision was easy. I went with Cyndaquil, the fire-starter with whom I share many fond memories from my adventures in the Kanto region. However, I did regret my choice in the end. More on that later.

From here, you end up in Jubilife, the town that essentially serves as the hub for the game. Here you can pick up main story missions, mostly given to you by Commander Kamado or Captain Cyllene. You can also grab some side quests, and these actually prove to be a good time. Not once did I feel like I was going out of my way to help people. Many of them either want to see completed pokédex entries, or the Pokémon themselves.

This brings me along nicely to your primary goal in the Hisui region. You see, this game serves as a prequel of sorts to Diamond and Pearl, and has you exploring the land that will one day be known as Sinnoh. However, since we’re back to where it began, the world needs a pokédex, and that’s your task. This in itself is great fun to me. I like the fact you put together the first one, staking a claim on an essential part of history. 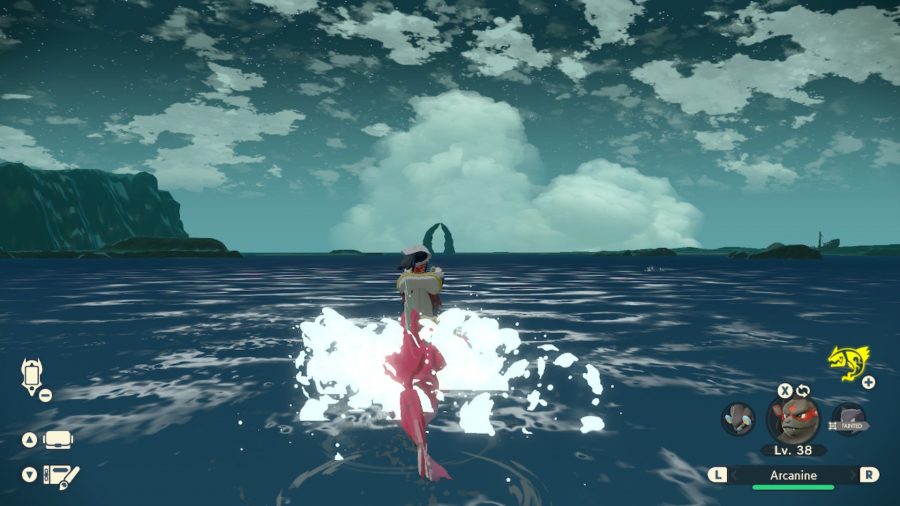 Of course, to complete it, you need to catch all the creatures in the Hisui region, and honestly, I love the new ways in which you can catch them. Firstly, you can see them, even flying high in the sky. You can see the ‘mon below you, though you must be on the ground to actually throw balls at them. When you have a Pokémon in your sites, there are multiple choices in how to approach them. You can go to battle, and weaken them the old fashioned way, something all Pokémon fans are accustomed to. Or, you can embrace your inner sneak, and take a sly approach.

If you crouch and remain out of the ‘mon’s sight, you can throw a ball at them. Should it land correctly, there’s a chance you’ll capture it. For me, I found this to be a fun and unique way of going about the traditional formula. You can also increase your chances by hitting the creature with a ball from behind, something that also translates into battles. If you hit them with a ball containing your Pokémon from the back, it stuns them, leaving them open to your attacks for two turns, assuming you don’t use a strong style attack.

Strong and agile are the two battle styles that debut as part of a new system when facing Pokémon. This mechanic adds extra depth to an already fun system. Strong attacks deal more damage, but this comes at a cost, one that usually allows your opponent to get in two attacks before you get another turn. Alternatively, you have the agile style, which enables you to get in two attacks yourself, though at the cost of damage. It adds a certain sense of strategy to battles. I find weighing up my options to be fun and crucial to winning victory against my toughest opponents. Of course, you also have the opportunity to use a move normally, without altering its style, a viable option, too. 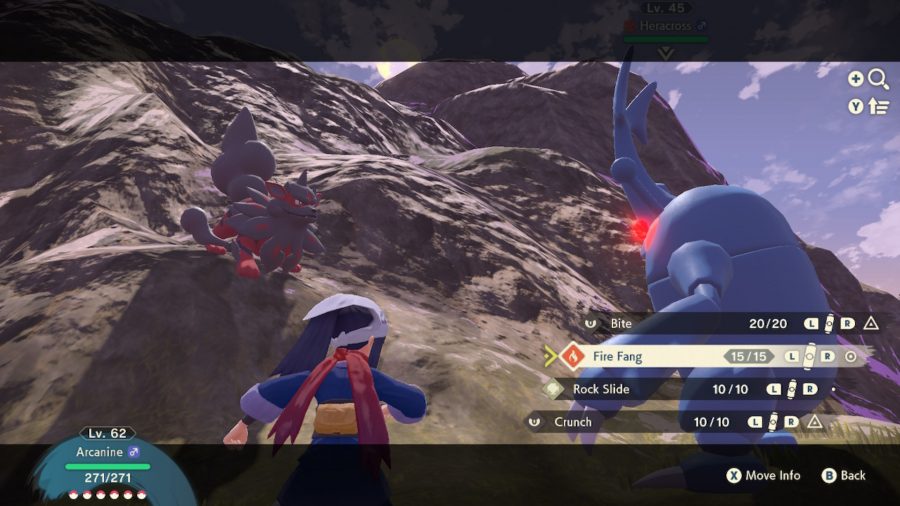 However, there are other ways to make your team more powerful, and that’s through items such as grit. Once again, it offers something that can turn the tide of battle, yet it’s also easy to overlook. Too often, when facing an opponent, you can find yourself on the back foot. To be honest, this happened to me a fair bit in the early going. That’s until I came to the realisation that grit boosts various stats. No longer did I attack second in battle, at least not once I increased the speed of my team.

And it’s not just your team that needs to be on their A-game. Since Pokémon wander freely, and have the capacity to attack you, dodging is necessary. Fortunately, it’s easy to do, is effective, and for me, it gives me a rush when I successfully get out of the way of an attack that has my life flashing before my eyes. This is also a vital skill when dealing with noble Pokémon, something that’s crucial to the main story.

The rift in the sky that you fall from not only drops you unceremoniously onto the sandy beach below, but it also zaps strange energy at noble Pokémon, beings that the Diamond and Pearl clans worship, with each one being responsible for different lords (and a lady). You need to quell the frenzy that they’re in, and these fights are some of my favourite moments in the game. There’s much on the line here, and you must succeed, but the intimidation I feel at facing such powerful foes is immense. 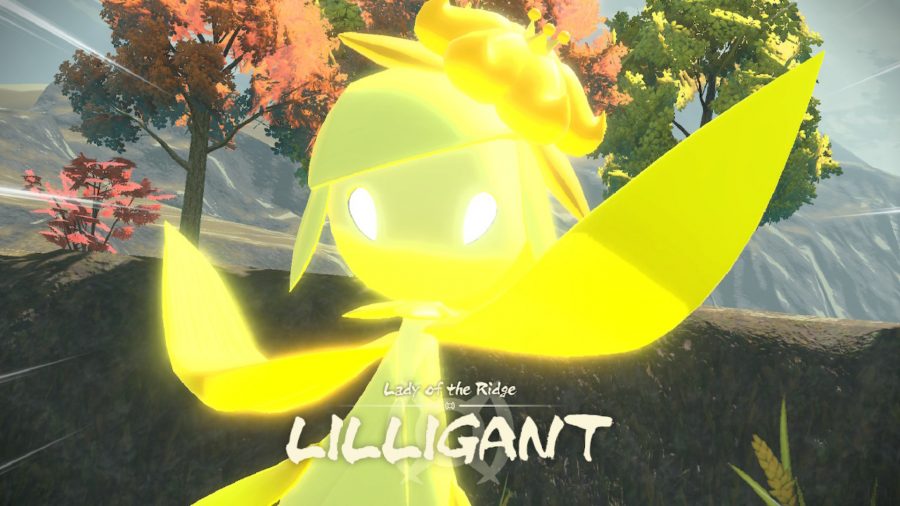 Nonetheless, you dodge your way around the enraged being, throwing soothing balms at it, made from its favourite foods. Yes, this is as adorable as it sounds. Each time you quell a lord, you progress the story, unlocking new parts of the Hisui region to explore, and I found this to be both exciting and tedious in equal measure. Allow me to explain.

Having the opportunity to not only explore a vast world, but different landscapes, gives me such joy as an RPG nerd, and the fact I can do it while riding incredible creatures is the icing on top. Be it from the sky, the sea, or the land, it’s amazing to ride the noble Pokémon.

However, sometimes, it feels like a chore when wandering around. It’s an open world, yet at the same time, it feels empty. What I can do in the world I enjoy, but sometimes I find myself pining for more, or for it to feel a little more full at least. Furthermore, it doesn’t quite reach the visual beauty I was expecting, and in all honesty, this is where my greatest issue lies. 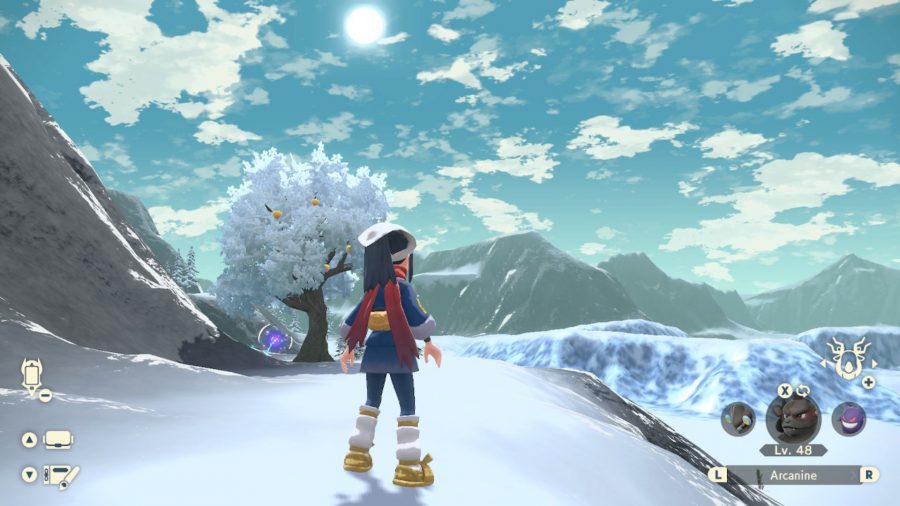 I’m playing Arceus on a Switch OLED model, yet the graphics still left room for improvement, and the drops in frame rates when docked don’t help either. However, I can’t deny the vibrancy that the world displays, especially if you play it handheld. It’s also nice to experience different weather conditions, climates, and locales. Yet, as much I enjoy exploring what we know today as the Sinnoh region, I can’t overlook these graphical hiccups (not when other Switch games, such as Breath of the Wild, that are older look better).

I can’t deny the vibrancy that the world displays

However, despite these issues, Pokémon Legends: Arceus achieves what it set out to. The game offers fresh mechanics, and a new way to enjoy a world full of incredible creatures. Do I think this is a masterpiece? No. Do I think it’s laid the groundwork for a phenomenal title down the line? Absolutely.

Arceus offers a great narrative, an enticing world (even if it feels empty at times), and characters that are a joy to be around. Of course, as with any ‘mon game, it offers end game content beyond completion of the main story, and this is something that tends to be hit or miss with me. Yet, on this occasion, I love the post-game content. It does a great job of keeping me engaged, allowing me to discover even more secrets, and grasp a better understanding of the world and Pokémon around me. 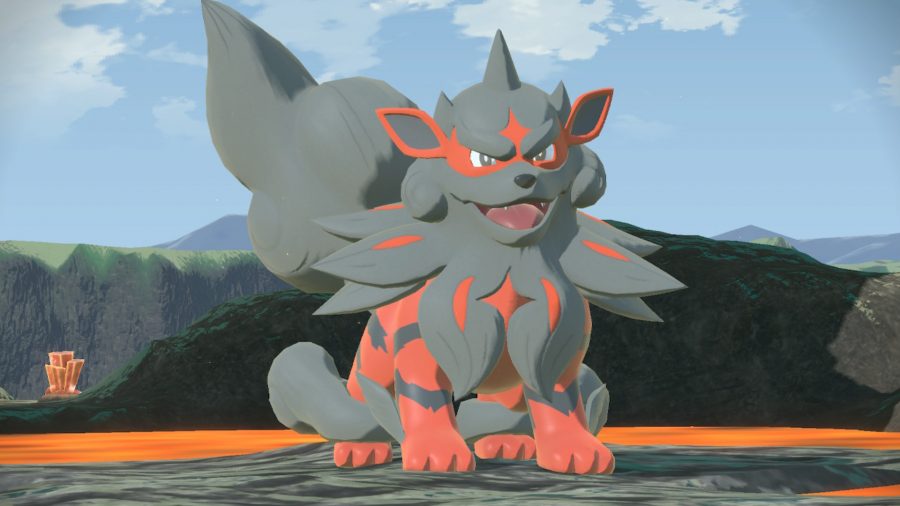 Not only is there more story for you to discover upon quelling the lords and solving the mystery behind the rift, but there are some incredibly rare Pokémon waiting for you to find. It goes without saying that the Pokémon of the lakes, Palkia and Dialga are in the game (as part of the main story, no less), and Arceus, but other legendaries are waiting for you to discover them. I, for one, was over the moon to see a certain ghost-type god-like ‘mon that was missing from Shining Pearl and Brilliant Diamond.

Before I close this out, I need to take a moment to discuss the new looks some of the Pokémon have. Honestly, I’m conflicted with this one. I’m all for different regions having different appearances for certain Pokémon, but I find some of the new designs to be a little lacklustre. Typhlosion, for instance, looks like it should be chilling on a beach or doing the hula in Hawaii. There’s no intimidation to it, not like the original design from the Johto region. On the other hand, ‘mon such as Arcanine look incredible here. So much so, in fact, that I’m going to be disappointed the next time I have one in a different title.

All in all, Pokémon Legends: Arceus is a must-play for any Pokémon fan, and is a welcoming experience for newcomers. Actually, if you’re yet to play a ‘mon game on Switch, this just might be the place to start. Change is coming, Arceus proves that, and I can’t wait to see what the future holds for the Pokémon series.

Pokémon Legends: Arceus is a must-play for any Pokémon fan. Not only does it offer a huge world full of gorgeous landscapes and great creatures, but it also features a fantastic origin story for Sinnoh. It feels great to be a part of history, even if there are some graphical hiccups