Our Pull Him Out guide is here for you puzzle fans looking to get the most out of your time. Although these types of games are something that we all improve on over time, our guide is sure to get you thinking like a professional. Besides, there is more to the game than just sliding poles.

In Pull Him Out, you play as an archaeologist who is on the hunt for some treasure. It’s up to you and your wisdom to make sure the treasure makes its way safely into your arms. However, not everything is what it seems in this puzzler, as our hero has to abandon his lust for treasure and rescue the love of his life.

This guide will tell you everything you need to know about Pull Him Out. Plus all of the sneaky tricks that are hidden along the way. You may not think you need a guide, but we assure you that, after you read up, your experience of pulling this man out of danger will improve drastically.

Everything in our Pull Him Out Guide:

Pull Him Out Download: How to get it on iOS and Android

Pull Him Out is a puzzle game created by Lion Studios. It is available to download from the Play Store, as well as on iOS through the App Store.

Pull Him Out APK: How to avoid app stores

Grabbing an APK for Pull Him Out couldn’t be easier. There is an abundance of trustworthy apps and sites that will allow you to grab any version of the game you want. Here is a link to APKPure to download Pull Him Out. My advice is to grab a new version, as it has the most levels and items to collect.

Pull Him Out PC: how to play on the big screen

Playing mobile games on PC is a growing trend, which is a good thing. It means it has never been easier for you to do so. Depending on your PC, you are able to grab a copy of Pull Him Out on the Microsoft Store.

If you don’t have a Microsoft store account, you can use an emulator and download the app through one of the many mobile emulators out there, such as Memu Play and Big Nox.

Pull Him Out Level 80: How to beat it

Level 80 is an incredibly simple level, disguised as a hard one. You spawn at the top of the screen, held in place with two diagonal poles. The alien is on the right side, and there is a landmine in the middle of the screen. If you pull the poles connected to the landmine or alien, then you will fail the level. 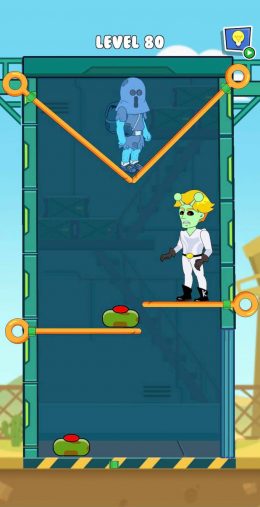 The only way to pass is to remove the diagonal top left pole, and your character will slide past the mine in the middle of the screen. After this, the alien will chase you and blow up. The other one in the bottom left corner is nothing but a decoy.

Pull Him Out: Tips, Tricks, and Cheats

The tips listed below are designed to get the most out of gameplay as you can.

If you are getting frustrated at Pull Him Out and want to let out your built-up anger, you should check out our Murder Hornet guide.

Read More
Pull Him Out guide