When we took over as head coach of the Cleveland team, it was out of desperation. It was a tragedy of a team that couldn’t muster a winning record. No veteran players in their right mind would have wanted to be traded there. Rookies lived in fear that they would be drafted there, ending their career before it started. Cleveland football was a disaster.

Now, six years later, fans enthusiastically pile into the stadium every game to power our team into the playoffs. We have a consistent, league-leading offense that can score on any drive. Rookies come to Cleveland looking to become a franchise player and lead this team to dynastic greatness. We’re no longer an afterthought, we’re inevitable. Next stop: the Retro Bowl.

This isn’t the engagement we’d expect from such a small game. Retro Bowl aims to create an American football simulator to rival that of genre juggernaut, Madden. It can’t possibly compete with that entire videogame empire, one whose entire look and feel is so influential that the real-life sport has been jacking its style for years. But when you consider its scale, and the platform it’s limited to, Retro Bowl is special. It has no peers when it comes to mobile football games – including the Madden ports and downscaled efforts that pepper the App Store yearly. (Check this out if you’re looking for a list of the best mobile sports manager games).

Where it succeeds is its clever mix of team management simulation and focused gameplay. Before the games, you manage things like team rosters, player morale, coaches, and facility quality. This kind of granular micro-management can be tedious though, so Retro Bowl only includes the things that matter. Your team has enough players to field for a full game, but you only manage the stars. Keeping a select few players happy and healthy is enough to keep all the random no name players in-line.

I find that this mimics a sports mentality pretty well. On real football teams, everyone is an individual, of course. But anyone who isn’t an analyst will rarely weigh the strength or potential of a team using anything but how good their standouts are. The New England Patriots are synonymous with QB Tom Brady, and not Kicker Steve Gostkowski for a reason. Possible proliferation of the sports-forward mentality that reduces people to mindless human capital aside, Retro Bowl can be appreciated for being realistic about how we interact with sports with this design choice.

These star players can also improve while on your team. They gain experience every time you play, and leveling-up allows them to raise some stats up to a projected maximum. When new players come to you via draft or trade, they’ll have two ratings: one for what they are now, and one for what they can potentially be. There’s a lot of strategy in managing this simple roster season-to-season. Do you keep the solid three star player knowing that that is as good as they get? Do you trade them for a two star that can become a four and a half in a couple of seasons? How does your salary cap fit into this?

When it’s time to hit the field, Retro Bowl takes a lot of shortcuts, as well. You have two options on every play: throw the ball to a receiver, or toss the ball to a running back. By dragging back on the screen, you’ll see the trajectory of your throw, and can aim the pass at will. After the ball is caught, you can avoid defenders with quick swipes up or down, or swipe forward to dive for more yards. All of these things work reasonably well, and are modified heavily by the player’s stats. A running back with low stamina can juke way fewer times before they start running at a snail’s pace. A quarterback with low throw accuracy has a short trajectory line, making it hard to predict exactly where the ball will go. 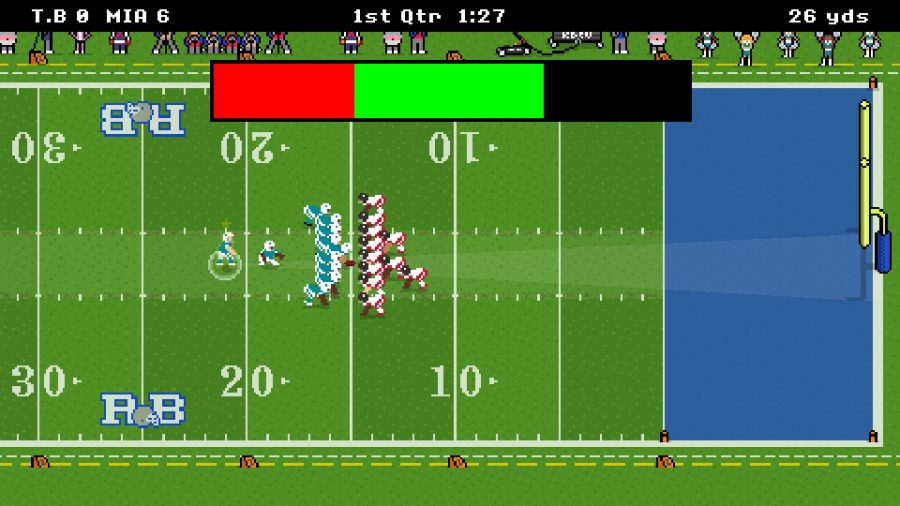 This scaled down system is fun and simple. You can’t move your QB around the pocket during a play, but watching your receivers struggle to get open while feeling that encroaching pressure of a defensive line caving in, successfully translates that pocket pressure that makes big plays so satisfying. How reliable things like catching and fumbling are depends on the quality of your players, but more than once I’ve had a really good wide receiver have a ball just bounce off of their helmet while they stand wide open down field.

That sort of randomness is everywhere in Retro Bowl. For example, you can’t call your own plays. At the beginning of a play, you see patterns laid out for you, and you can only choose to throw it or run it. There’s no telling how the game has come to call this play. Does it take into account the defence? Does having a better offensive co-coordinator determine what kinds of plays get called? I think taking the minute elements of play-calling out (audibles, play action) is fine, but being locked into a play that looks no good, without any understanding of why it was called and no option to change it, feels bad. Especially if you only have average offensive tools at your disposal. 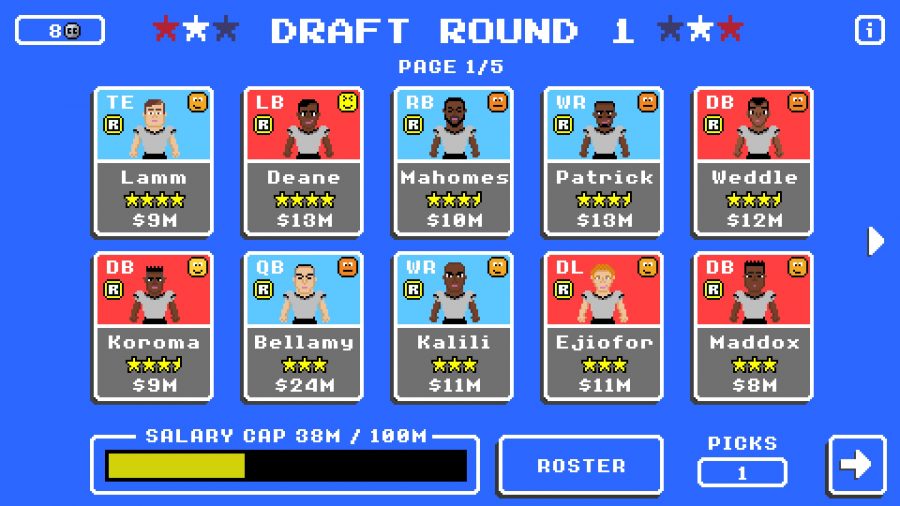 There are also absolutely no defensive plays. Defence is played out via a series of text boxes that give you a gist of how the rival team’s drive is going. The success of your defence is determined by how good your overall defence is. That’s determined by the quality of your defensive players and coordinators. But it always feels like a crap shoot. When opposing teams have average or higher offenses, you’ll do best to assume that every time they have the ball, they’ll score. It reminds me of blackjack, where your best bet is to assume that the dealer’s face down card is a ten at all times. Gambling also feels bad.

The stripped down features and mechanics are a good way to translate football sim experience to the small screen. The extreme lack of information and abundant RNG make for a game that is hard to fully engage with. All that said, if you want football in quick doses, and that head coach management experience from the big boys on the go, you’ll be hard pressed to find a better alternative than Retro Bowl.

This retro-inspired, stripped-down sports management game can compete with the best; an excellent new football game for mobile.