You see the word roguelike thrown around so much these days, it can sometimes be difficult to discern what it actually means. Broadly, we use it to describe games that are run-based, with an element of procedural generation. They are hard, but fair. They reward a learning of systems, as opposed to memorising pre-placed, hand-designed stages. It’s learning a language, as opposed to just memorising a book. But from there, anything goes. If you want a solid definition and a few examples, we’ve actually put together a list of the best mobile roguelikes.

Action games like Dead Cells and card battlers like Slay the Spire, all take this general formula, and use it as a base for something way more extravagant and experimental. We like to call these roguelites.

More narrowly, roguelikes are games that share the same design constants as Rogue, the ASCII-based dungeon crawler from the 80’s. Rogue included tile-based movement, where each step taken was a turn. Enemies moved in reaction, as you attempted to navigate your way to the end of a floor of a dungeon. Various weapons and abilities also modified how you dispatched foes, but if you died on your journey, the game is over. You’d have to start from the beginning.

But for the purposes of this review, consider roguelites as like mezcal, made from basically the same ingredients as a roguelike, but because they aren’t made a very specific way, they aren’t tequila. This is to say that Seven Scrolls, the new game by Jesse Venbrux, is maybe the best attempt at making modern tequila on mobile. Its mechanical simplicity makes it easy to pick up and play, but the tiny wrinkles it throws into the formula are innovative.

As a purple skinned monk, your goal is to travel to the end of this dungeon, one little, grid-based room at a time. Each floor is small – only 5 x 5, with Pac-Man style doorways on the outside borders, and little walls within the board to obstruct movement. Monsters periodically spawn to give you grief, and impede your mission. One of them, always the chicken, must be killed to get the key you need to move onto the next floor. The rest can be avoided and dispatched at your discretion. 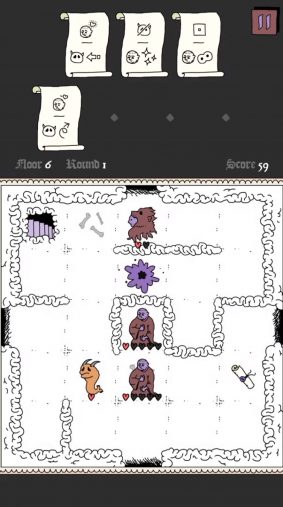 Its mechanical simplicity makes it easy to pick up and play, but the tiny wrinkles it throws into the formula are innovative

These floors feel less like action games and more like puzzles (want more? Check out our list of best mobile puzzle games). Moving around in ways that minimise your risk can require you to think several moves ahead. Once you get a few rounds in, it never feels unfair when you get cornered by a pair of monsters. That said, it can take several deaths and restarts before you begin to really get Seven Scrolls.

This is due to its titular scrolls system. Picking one up will add an effect that reads like an if-then statement. For example, if your monk kills an enemy, he gets healed. There are many different triggers and effects that create some pretty potent spells. But there’s no guarantee whether these scrolls will work in your favour or not, though. Effects like shielding, or healing, can target monsters. Triggers pile up, causing lots of effects when something as benign as walking into a new floor occurs. 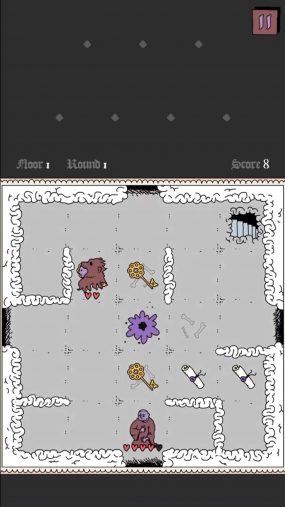 You can also use scrolls actively, so long as a target is applicable. Activating your scroll prematurely ignores the trigger, and just plays the effect out on the target. Maybe you need healing now, or want to make room in your limited inventory for a potentially better scroll. Just tap to burn it immediately.

This messiness is part of Seven Scrolls’ ultimate charm though. On top of the puzzle of navigating the floors, the chaos that the scrolls can add really unlocks a tactical layer that is a rare gem of complexity and fun. Once you pass your first round by getting through all seven floors, and starting over again, you’ll be hooked. 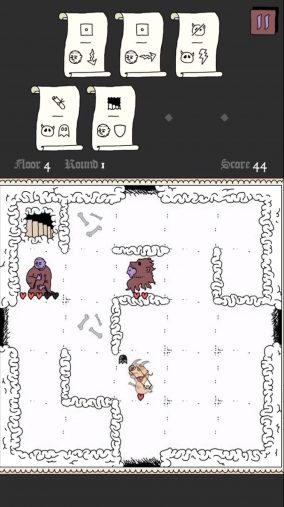 The scroll system has a charm reminiscent of Damian Sommer’s Chesh or Michael Brough’s Corrypt. Both are games that embrace mechanics that feel like bugs, and turn them into core gameplay. Jesse Venbrux’s project can stand shoulder to shoulder with some of these highly experimental successes.

Seven Scrolls has a strong, almost Holy Roman Empire visual style. Many of the icons have that twisted look to them: monk’s limbs crooked like paper dolls, one creature looks like a head coming out of the mouth of some other beast. I wouldn’t say that any individual piece of art is excellent, but as a whole, they come together to create a distinct feel.

All in all, if quick, turn-based puzzles and tactics are your preference, there’s something in Seven Scrolls for you. It’s the most roguelike game you’ll play so far this year, and is a great look at how sometimes slight innovations can move a genre into new territory far faster than overdressing it with tons of other features.

Seven Scrolls is a small game, but a big step towards making roguelikes feel new and exciting again.