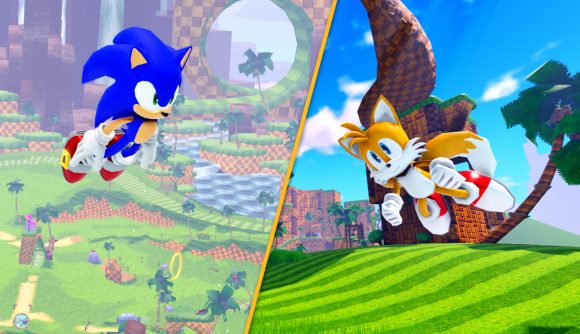 Gamefarm and Sega have teamed up for a Sonic Roblox crossover, bringing the loveable mascot over to the creative playground full of wacky experiences. Titled Sonic Speed Simulator, the game is the first of its kind – a big-time AAA videogame character appearing in Roblox (officially, of course).

With the announcement of the new Sonic Roblox crossover, it seems that the blue blur is destined to be involved with everything except a new, proper videogame. We’ve had two movies, countless collectables, and now this crossover. Don’t get me wrong, it looks great, but it does feel like Sonic is procrastinating in a way.

Still, the game looks really good for what it is, with classic Sonic gameplay – high-speed, coins, and numerous worlds. There are some Roblox touches too, including a new skin when the game hits 10k likes, as well as pets and leveling up. If you’re looking for a classic though, we do have a guide to the best Sonic games that might tickle your fancy.

We have officially partnered with @SEGA to bring @Sonic_Hedgehog to Roblox in our upcoming game Sonic Speed Simulator!

We worked with various sonic developers from the #Roblox community in order to make this possible!#RobloxDev

Where can I play the Sonic Roblox experience?

Sonic Speed Simulator is currently in a closed beta that you can play now for 50 Robux. There will be a full public launch at some point, so keep an eye on the Sonic Roblox page for more.

That’s all we’ve got on the unlikely Sonic Roblox crossover. For more of the blue spiky dude, check out our Sonic Colours Ultimate review to see if it’s for you.