Pascal Bestebroer is one of those little known, grizzled vets of independent game design. He’s been in the business for something like 15 years, but he’s found a real identity in the last eight or nine years. From a few gameplay videos or a round or two of play, you can spot those sometimes intangible signatures of OrangePixel.

Outside of the sprite work style that is similar from game to game, OrangePixel titles all seem to have a fascination with mechanical mash-ups. Reducing genre to its basic building blocks, then smashing them together is the mad doctor mindset you need to be ready for on approach.

The original Space Grunts rose above the glut of indie shooters in 2016 because of it’s bold take on real-time strategy and shoot-em-ups. If there was one large disappointment about the 2019 follow up it’s that it doesn’t feel like a bold experiment. As a more traditional, deck building roguelike, Space Grunts 2 feels like a take on a genre that’s getting very close to critical mass.

That isn’t to say that OrangePixel doesn’t have its own ideas about what could change about this popular indie game framework. Space Grunts 2 values speed over anything else. Movement is quick and snappy. The procedurally generated maps are small and (mostly) easy to navigate. There are often a bevy of ways to solve some problems. Every run can feel like a speed run, and it never feels like you’re being forced to overthink your next few steps in order to make ‘the right move.’ It can be a freeing feeling to know that most moves feel like they can be the right move at all times.

While navigating these dungeons, you’ll also be picking up weapons and items. These are floating icons that turn into cards upon pick up, and are added to your deck. (Speaking of decks, check out our list of the best mobile card games for more games like this). Whenever you run into an obstacle or an enemy, a hand of those cards is drawn. These are all the options you have when it comes to dealing with whatever’s bothering you. It takes several runs to really get the hang of what these items do. Over a dozen runs in, and I am no closer to understanding how to gather them in such a way as to create a competent deck.

I try to be discerning, but as cards get used, options become slim when aggressive enemies won’t let you be. You’re also heavily incentivised to pick up everything you come across, because it’s the easiest way to gain experience. But the frequency in which I find myself with an abundance of cards I don’t want or need suggests that some sort of strategy needs to be applied. I wish I was better at finding that balance, and I wish that the game did a bit more work to guide me towards one. (You can find games that play similarly and get the balance right in our best mobile roguelikes list).

Enemies themselves seem to just appear out of nowhere, with little rhyme or reason

There are ways to affect your deck after you make it, but most of them involve finding little kiosk structures placed around the map. Some can change one card type into a different one. One lets you access all of your healing cards at once. But they spawn unreliably, and often it’s just easier to run to the exit than it is to find one of these things.

All this makes combat feel a bit uneven as well. The rules are straight forward; you and your opponent play cards one at a time, which resolve to do damage, heal, gain armor, or some mixture of those things. Some attacks can even affect enemies and terrain outside of the combat. But I never feel like my deck has character, or even some sort of win condition. It almost always feels like it’s just a pile of stuff I found that I have no real attachment to, outside of just throwing it at things that are trying to kill me. 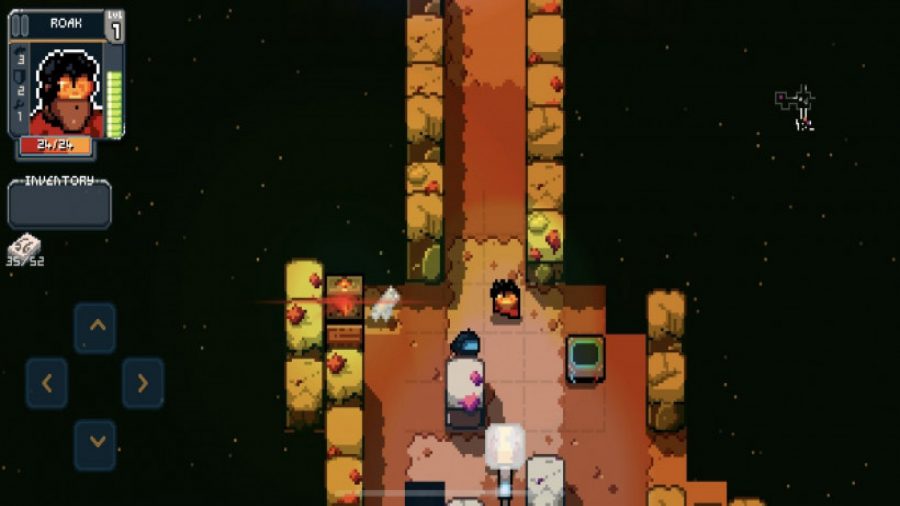 Enemies themselves seem to just appear out of nowhere, with little rhyme or reason. Each of the worlds you progress through seem to share mostly the same biomes, and therefore a lot of the same enemy types. As you get further along, newer and stronger monsters appear, but they never feel like they belong in the environments that you find them skulking around in. When they do attack you, their plays are often a mystery to you.

Without any hints of how they might act, you can find yourself throwing away valuable cards at them. More than once has an enemy chased me tirelessly from room to room, finally catch me, and do nothing on their first turn, effectively wasting a big counter card I played. Their behavior doesn’t do your tactical play calling any favors. 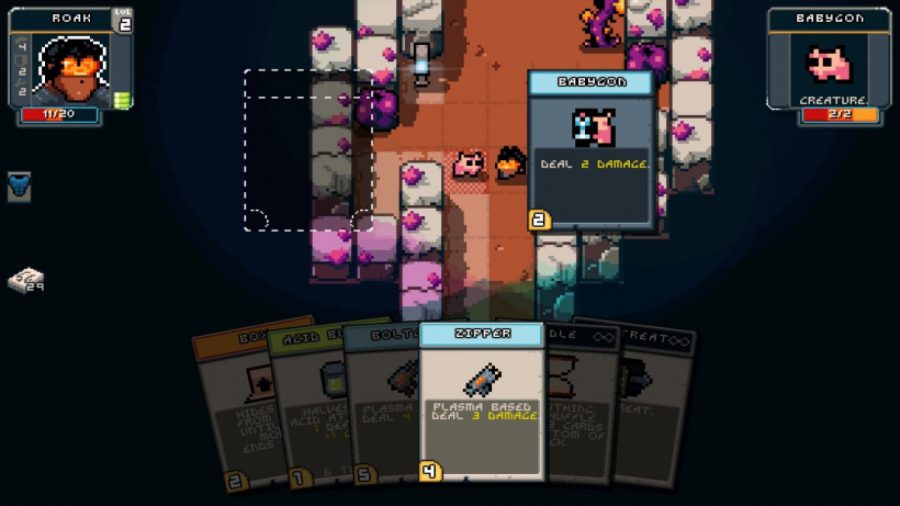 The low bit sprite style is kind of old hat by this point, but Space Grunts 2 does look pretty good, even if it’s not groundbreaking. Some of the HUD and tooltips lack polish, though. The directional arrows sit askew of center in a subtle but distracting way. Some of the text runs into each other. Part of my screen is obscured by the camera bevel on the front of my phone. Just odd, small things that alone aren’t problems, but taken together really makes me wish some of that stuff got a second coat of paint.

All in all, Space Grunts 2 isn’t nearly as exciting as the first. It does nothing to really rethink the card-based roguelike in any fundamental way. The scaled down approach does make it an appealing distraction for a while. But without much depth, the quick dips into chaos will get old pretty fast.

Uncharacteristic of developer OrangePixel, Space Grunts 2 is a sequel that’s relatively tame on genre innovation. It stands as a serviceable roguelike deckbuilder in a world where excellent ones like Slay the Spire exist.