If SpellTower+ sounds eerily familiar to you, it’s because a version of this game already exists. The original SpellTower debuted on an archaic App Store back in 2011 to near universal praise. For all of the years since, SpellTower existed in an ever mutating form. New modes slowly grew from the sparse base design. With it, new jumbles of code that didn’t always play well with the lines before it.

On top of that, necessary firmware upgrades from iOS to iOS didn’t always accommodate the new hardware coming out. Year over year, iPhones got bigger and the aspect ratio of SpellTower got weirder and weirder. Even after the Great 64-bit migration of 2017, SpellTower stood tall on the digital storefront.

After a while, Zach Gage was faced with the same sort of dilemma a lot of mobile game devs are faced with. Do they continue to support and update a game broken by years and years of updates and hotfixes to barely accommodate new hardware? Do they just abandon support and move on?

Gage picked option 3: find a friend – Neonimo’s Jack Schlesinger in this case – and rebuilt it from the ground up.

The new SpellTower+ sits on the shoulders of that early mobile game king and wears the crown well in it’s own right. Like any good remake, it is familiar enough to feel exactly how I remember it, with enough modern touches that make it feel like a game made in 2020. It’s a game that feels like three different games. It’s primary modes, Search, Puzzle, and Tower, have different levels of intensity, and require different types of tactical play to succeed.

Puzzle mode is like taking a newspaper word search and turning it into a horror movie. A wall-shaped jumble of letters contains words to be tapped and scored on. Those letters vanish, dropping whatever was on top of them down. Every time you make a word, more letters are added to the bottom row, pushing everything to an encroaching top line. Your task is to score as high as you can before you break the line of no return. It’s a tense nightmare. 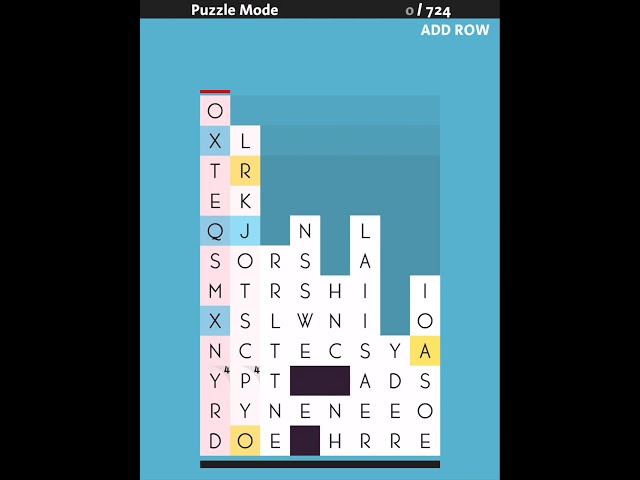 It’s also a great and interesting challenge. You don’t want just any words, you want the biggest words possible. Not just for the score, but for what nailing long words can do for the board, eliminating bonus letters and the like. How you make words, and what order you do them in becomes a second lane of thinking, too.

You might make a nice 20 point word with the four letters in front of you now, but if you can find a way to slide a particular letter down just two rows, maybe you can make use of this pesky X. Many people want to remove as much stress from their lives as possible. In SpellTower+, stress brings this tried and true bathroom distraction to a new level.

If you can’t get enough of scratching your head, why not check out our list of best mobile puzzle games? We’ve put together our favourites, so there should be something there for anybody. Anyway, where were we?

Search is a smaller, more cerebral endeavour. In a seven by seven grid of letters, you have to make the most valuable word you can that also includes a special starred letter. This is a real test of your word search skills, since there’s no margin for error. There’s also no time limit or encroaching fail state to push you over the edge. Take your time and strike when you’re ready.

In between is the Tower mode, which resembles Puzzle in size, but when you score words, new letters aren’t added to the bottom. Your goal here is to make the best words you can in this limited set of letters. There’s no encroaching game over screen, but you still need to think moves ahead, as the board will morph and change as you score and remove played words.

You’d have a damn fine mobile word game if these three core modes were all you got, but SpellTower+ packs so many more ways to play in such a simple package. Most of them just modify these basic modes in some way. For example, ExPuzzle adds longer minimum work requirements to the mix, while Double Puzzle adds two lines per score instead of one.

Rush and Blitz are like Puzzle, but rows are added after a brief period of time, whether you’re making words or not. These are neat little takes on the standard rules that I don’t find myself playing very often because they seem way more masochistic and unbalanced than the core modes.

SpellTower+ is free to play, but that version only includes the basic modes that the original SpellTower had. To get access to things like those alternate Puzzle modes, Blitz, or Zen (the chillest of all modes) you’ll have to cough up a fiver. I don’t think you need to play the extra stuff to get a great experience, but access to things like Daily Search and Puzzle might be up your alley if you’re a bit of a score chaser.

It’s not shaking the visual and audio world up by any stretch. SpellTower+ is almost purposefully generic and low key. Colors and lines are simple and clean and look sterling on today’s smartphones. Lo-fi jazz gets the brain juice flowing, but doesn’t command a need to add the OST to the collection.

If you’re a word game fan of any ilk, there’s almost absolutely no way to go wrong by picking up SpellTower+. Zach Gage fans already know the kind of wonders he can do to the average parlor game, and this mutant word search is no different. Updating this old classic returns it to the top of the “must-have” mountain for replayable “dad-core” game enthusiasts and casual brain teaser fans alike.

Zach Gage's latest is a required app for word puzzle fans that revamps an old classic for your new devices.