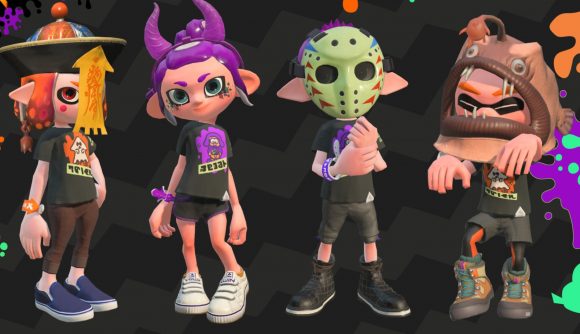 The official Nintendo of America Twitter account has just revealed Splatoween 2020! A Splatfest tournament will take place in Splatoon 2 and pit Team Trick against Team Treat in an epic battle. Some super spooky outfits are also shown off in the Tweet letting players into the Halloween spirit before the event starts. More information on the costumes will be available via a news article on your Nintendo Switch later this month.

Team Treat won the original Splatoween Splatfest back in 2018 by a tiny margin, so loyal members of Team Trick are hoping to take their revenge this year. Nintendo also announced a Super Mario-themed Splatfest is happening in January, so Splatoween is a welcome challenge in the interim.

Whether you are new to Splatoween or a returning player, there will be plenty to enjoy. The event begins on October 30, 15:00 PT / 23:00 BST and ends November 1, 14:00 PT / 22:00 BST. Make sure you keep up with everything Nintendo by checking out our Nintendo Direct Mini updates!

Bubble, bubble, toil and trouble, the #Splatoon2 #Splatoween event approaches! As befitting the spooky season, this #Splatfest will pit #TeamTrick vs. #TeamTreat!