Let me start by stating unequivocally that I am a fan of puzzle games (pssst, take a look at our list of the best mobile puzzle games for more) and inspired spin-offs. Every great game usually has a cluster of kissing cousins, throw a stone and find one. Bearing this in mind, most mobile gamers remember the recent Hitman- Lara Croft- ‘Go’ series of games, as much for their taut level design as visual polish. Well, Spy Tactics is supposed to be a dead ringer for Hitman Go, and it soullessly succeeds. It’s an incredible value, and has clearly been a labor of love, but it is irredeemably marred by confounding controls and an ultimately derivative design.

Just like in the Go series, each level is presented like a diorama representing a small objective. The spy moves along a series of nodes, silently disarming patrols whilst picking up that eternal McGuffin briefcase. Counting steps and cycles becomes paramount, as does establishing a causal sequence. Take out Guard A to open the door, extending B’s patrol such that my agent can grab the briefcase. So on and so forth, ad nauseum, unfortunately.

As far as spatial puzzles go, the format is decent but also rather exhaustible, for each level can usually be solved by splitting it into chunks and simply experimenting with every possible move. To get around this, new levels frequently introduce new mechanics, like snipers or single-use weapons, which Spy Tactics uses to wrinkle what is otherwise a very uniform play experience. This by itself isn’t a fatal setback; Sudoku puzzle books are similarly predictable in progression but still compelling.

Nevertheless the level design feels boilerplate. Yes, it is at times vexing and challenging, but Spy Tactics as a whole lacks that spark, the galvanizing ‘aha’ moments that punctuate what at times can be a tedious and difficult experience. A good puzzle game taunts and leads its player to wider understanding. Spy Tactics does teach rules of thumb and tricks of the trade, but it does so haphazardly and mostly through rote repetition.

Good design means intentional traps and breadcrumbs, basically creating what is very much like a mental dialogue with the player. Puzzles functioning like riddles, asking for specific insights to proceed and refusing entry to the unwitting. Well, some puzzles just ask you try again and again, and will give inches of progress as a reward for mute persistence. Spy Tactics is more the latter, asking for minor experiments and variations on the theme. Nothing to totally stump the player, nothing to totally delight them either.

String the levels together and you have something like a campaign, with an animated introduction to drive the narrative, like the first series of levels, which are ostensibly about ousting a corrupt police chief. The writing here is wonderfully punchy, brimming with do-or-die intensity. It is accompanied by the requisite espionage jazz. The flavor is welcome but nonetheless a little cheesy, especially as divorced as it is from the actual puzzle experience. As set dressing, though, it’s distinctive and shows an imaginative, if deadpan, take on domestic spycraft. Points for flair.

Because so much of puzzle-solving involves minute variations and experimentation, the lack of an undo function is nonsensical. It adds an arbitrary hurdle to the proceedings, especially when a puzzle is some forty-odd moves long to complete successfully but one miscalculates or misclicks at the finish. Some frustration actually builds concentration and engagement, but an excess really kills the buzz. In effect, the lack of an undo function means players must have a razor-sharp memory and foresight since any plan is set in stone from the get-go. It’s an odd limitation. 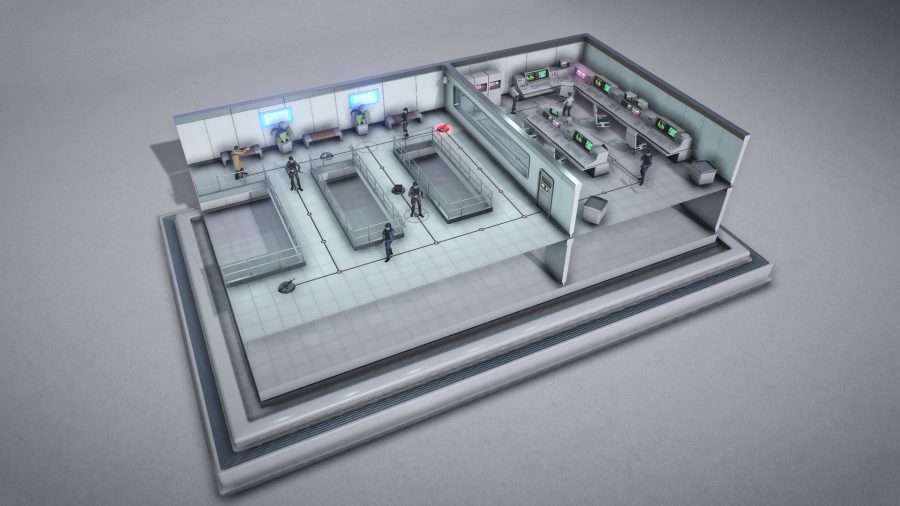 While the thematic dressing is original and piquant, the actual mechanics of Spy Tactics are lifted pretty much copy-paste from Hitman Go

The controls are accurate but over-sensitive so that it is trivially easy to send your agent in the totally wrong direction. While the board and view can be rotated freely, the movement is tied to swipes along an invisible compass rose, and so even if you rotate the field 180 degrees, the movement stays the same, which is just begging for trouble. Also, the animations on enemies are a bit of a drag on the flow of play. None of these alone are a serious drawback, but taken together they make for a puzzle game that is harder to play than it is to solve, and this imbalance leaves an unpleasant impression.

Ideally the controls and interface should be as transparent and smooth as possible, but this sadly isn’t the case here. More’s the pity, for the free rotate does actually show off the clean visual design in a rather nifty way. It’s actually pretty crucial to see past some terrain using rotation, so the fact that it jars with the static movement inputs is just maddening. 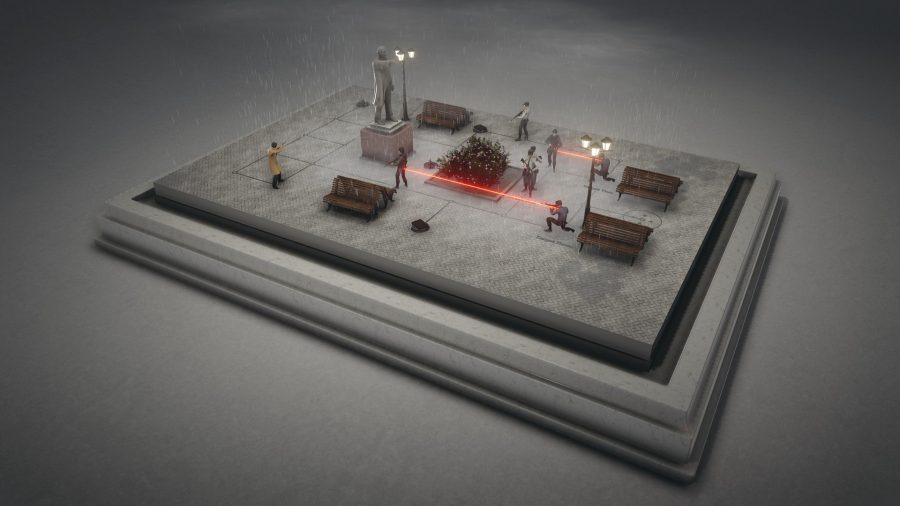 Then again, I’m a bit of a glutton for punishment, both from a mobile standpoint (Darkest Dungeon, Cultist Simulator) and a puzzle one (Baba Is You, English Country Tune). So a little push-back is good game philosophy, as it gets the creative juices flowing in the player. But here Spy Tactics runs into another mismatch: its puzzles are clear-cut and straightforward, if admittedly decent, but the physical act of solving them is the convoluted, protracted, time-consuming, unforgiving part. So the overall effect is a drag.

Then there’s the clone issue to mull over. While the thematic dressing is original and piquant, the actual mechanics of Spy Tactics are lifted pretty much copy-paste from Hitman Go, which is tiresome at best if not downright problematic.

Spy Tactics does indeed boast 40 levels and its gameplay is just like that other game you might also like, but in an age with a glut of affordable entertainment I would urge a little more discernment. It’s technically well-made and has some points in its favor, but overall does not merit a try unless there’s been a series-Go-sized hole in your life.

Spy Tactics' own ambitions are foiled by unimaginative level design and a fiddly control scheme.