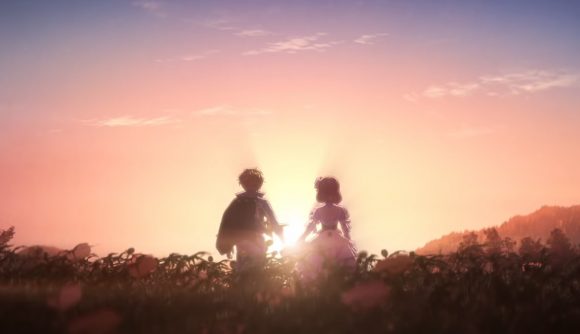 Tales of Crestoria, the gacha RPG, is celebrating its recently released tie-in anime with a campaign. Tales of Crestoria: The Wake of Sin is a 15-minute long story which reimagines the game’s main characters as they embark on their journey. This campaign aims to reward players over the next 14 days with a host of treats. The main story is also being expanded with the introduction of the first half of Chapter 6 on October 22 at 03:00 EST/12:00 PST/08:00 BST.

To receive the rewards from the campaign, all you need to do is sign into the game 14 times during the month-long promotion. The login bonus period started on October 15 and will last until November 16, giving you plenty of time to claim your rewards, which include 1,000 Gleamstones, an SR+ Guaranteed Summon Ticket, and more.

In addition to this, you’ll receive a free summon per day during the campaign period. All of these rewards stack on top of the ‘100-Days Since Launch’ login bonus scheduled to begin on October 22. This second promotion lasts until November 5, allowing you to collect a total of 500 Gleamstones, an SR Guaranteed Summon Ticket, and Training Items. The method of securing these items is exactly the same as the other promotion, just sign in each day to collect your rewards during the 14 day period.

There’s also a Short Anime Release Pack that you can purchase, giving you a discount on a unique Summon Ticket that introduces a special character. Purchasing this pack grants you 2,980 Gleamstones and a Short Anime Commemoration SSR Guaranteed Ticket, giving you access to SSR Memoria Stone. You’ll want to be quick as this promotion is only available from October 16 to November 16.

Finally, new players amongst you will be pleased to see the Beginner’s Campaign that is being added during the Short Anime promotion. This Beginner’s Campaign makes it easy to improve your characters with Power-Up Quests at half the normal AP cost. The second half of the campaign offers Gald Quests, which are perfect for enhancing characters. As part of the promotion, these Gald Quests will award 1.5x their normal amount.

Looking for a different kind of RPG to play on the go? We’ve got a list of the best mobile RPGs, guaranteed to have you obsessed with the stats of your characters for hours on end. If you’d prefer to play a new gacha game, that’s also something we can help you out with. Check out our best gacha games guide to see what you’ve been missing out on.