I have been looking forward to The Witcher: Monster Slayer since its surprise announcement last summer, soaking up any details I could along the way, and it’s been a joy to finally get my hands on it. The idea of fighting the beasts from one of my favourite video game series in an augmented reality experience is appealing. And honestly, The Witcher universe suits AR, and it’s surprising that it took so long for this to happen, especially since Pokémon Go continues to see success since its 2016 release.

The premise of the game is simple. You’re a Witcher, a slayer of beasts. However, unlike the console games, this Witcher is your own customisable character that you create and name yourself. Moreover, the game is set in a time before Geralt of Rivia even exists, meaning you don’t get to meet the famous Witcher personally – this is a real shame, given he’s one of my favourite video game characters. However, there are still many faces for you to meet, so keep an eye out on your travels.

While Pokémon Go sees you catch Pokémon, The Witcher: Monster Slayer has you rid the lands of feral creatures through combat. This is the primary focus of the game, defeating creatures as they appear on your map. To be victorious, you must consider various things. Such as, what sword they are weak to – steel or silver – and what oils may come in handy. You also start the game off with an igni sign, unlocking more as you go. Choosing the correct sign based on strengths and weaknesses could be what saves you. Personally, I found this to be a real selling point, as it’s reminiscent of the combat decisions you make in The Witcher 3: Wild Hunt.

The Witcher: Monster Slayer does a good job of bringing the Witcher experience to mobile. As stated above, you fight with a sword, deciding whether to go to battle with steel or silver. But, there are also potions to consider, which, much like oils, can turn the tide of battle. There are many potions available. Some boost your health, while others provide Witchers with an increase to attack damage. Longtime fans may be wondering if bombs are also available, and, of course, they are – all of which also have different attributes to take down creatures. Their inclusion is a welcome sight, because no matter how much I like swinging a sword, it’s nice to cause explosions every once and a while. 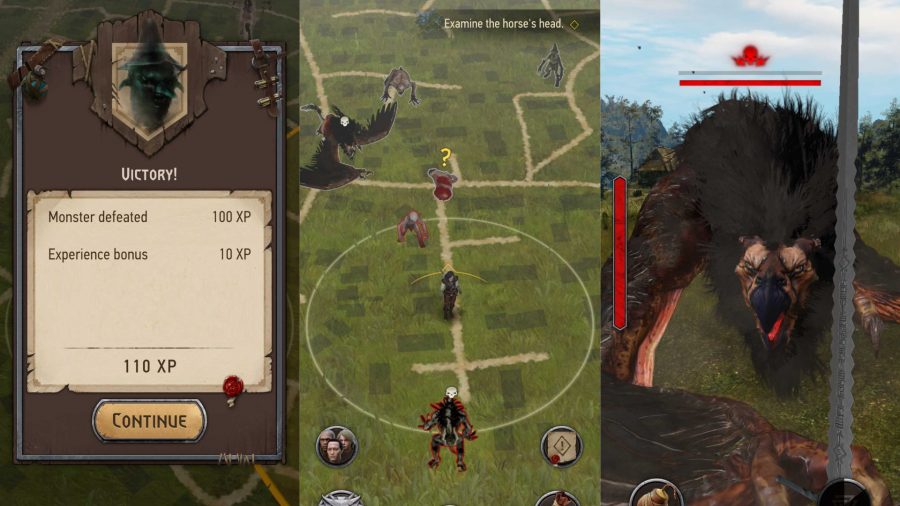 Naturally, as the game progresses and you level up, the monsters become more powerful – this is where attribute points come into play. Much like in the mainstream Witcher games, you earn points, allocating them into three categories – combat, alchemy, and signs. All of these are worth spending points on. However, prioritising them is important, depending upon your build and playstyle – I am partial to a bit of combat, so working on my melee stats and causing more damage with my swords, is preferable.

crafting equipment for any occasion helps to ensure victory

There’s more to the game than just slaying monsters, as there are many quests to pick up too. Yes, these involve killing beasts, but rewards are ripe for completing them. Much like The Witcher 3: Wild Hunt, there are many quests of varying difficulty for you to embark on. Come out on top, and collect some coins – which in turn go towards oils, potions, and any other items that may aid in battle.

Speaking of battle items, becoming friends with other Witchers allows you to trade packages, which contain materials that, in turn, are useful for crafting items. Furthermore, it’s not just potions and oils that you can make. Rather, there’s armour and swords available, too. Each creature has strengths and weaknesses, so crafting equipment for any occasion helps to ensure victory. So long as you have both a steel and silver sword, you’ll always have a practical item available. 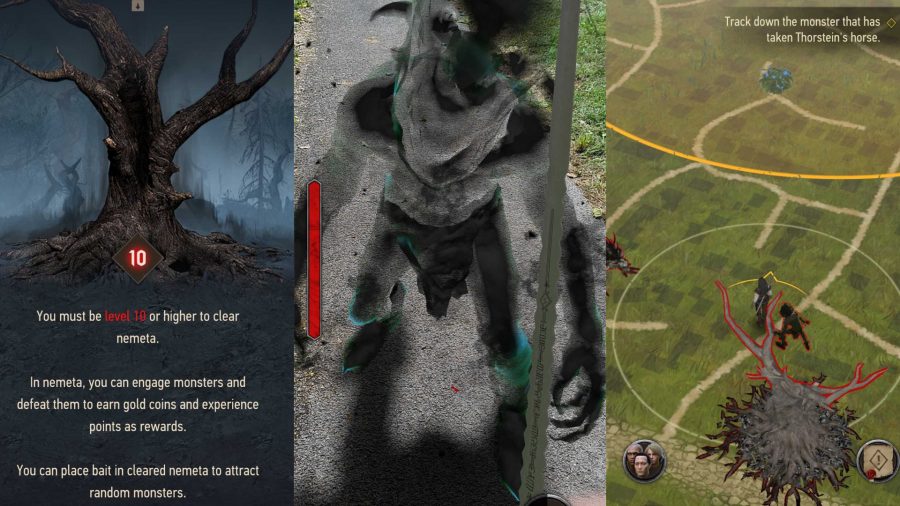 However, no game is perfect, and The Witcher: Monster Slayer falls short due to how long it can take for updates to appear on the map when you’re out walking. You may be wandering around for a few minutes before things change, meaning you miss various monsters and possible herb bundles, which is annoying when my reason for leaving my cosy house in the first place is to perform my Witcher duties. It also proves painful when trying to reach certain quests, though you can relocate these through your journal.

Overall, The Witcher: Monster Slayer is a fun game with plenty to offer, providing hours of entertainment. It features everything that I expect from a Witcher title. Combat is smooth and includes potions, signs, and oils, all of which are essential in the main games. Despite the slow updating of the map, it’s an enjoyable experience that keeps you coming back for more. The path is calling you Witcher, and it’s up to you to answer it.

A fun beast slaying experience that new and existing fans of The Witcher will enjoy, even if loading times are a little slow