Building worlds is a difficult business. Year-after-year we see the escalation of open worlds in triple A games – bigger and bigger spaces for you to explore with ever more stuff to do. But we also know the developmental toll of those worlds, and recently, card games have begun to find a way around this. Cards can build worlds just as well as decks, representing everything from characters, to reputation, to narrative encounters, and recent indie games like Griftlands and Slay the Spire take great advantage of this. But one game in particular stands out in terms of its use of cards as an element of world-building. That game is Thronebreaker.

“I had only worked on AAA projects before, where it’s very difficult and costly to show huge scenes like sieges or other complicated events staging-wise,” explains Mateusz Tomaszkiewicz, Thronebreaker’s game director. “What I found really refreshing when working on a game like this was that we can show virtually anything we want in a symbolic way, using only card visuals and mechanics, text events, and dialogue.”

Thronebreaker’s greatest quality is how it plays with the rules, using cards to not only tell a story, but to create memorable and challenging battles for players. But to understand Thronebreaker’s use of cards, first you have to understand Gwent – the deck builder it’s based on.

As most of us know, Gwent began as the card game in The Witcher 3, but became its own individual title after Wild Hunt, launching in beta in 2017. Thronebreaker originally began life as Gwent’s story mode, before it span off into its own game. But a good deal of Gwent’s influence can still be seen, especially in regards to representing narrative scenarios.

“The actual battles in Thronebreaker were scripted by the same people who were working on beta Holiday Events for Gwent, and they brought similar design philosophies and ideas to the table,” says Tomaszkiewicz. “Our goal was to have as many custom-tailored battles as possible to reinforce the narrative of specific events, using custom card mechanics and special objectives for the player.” 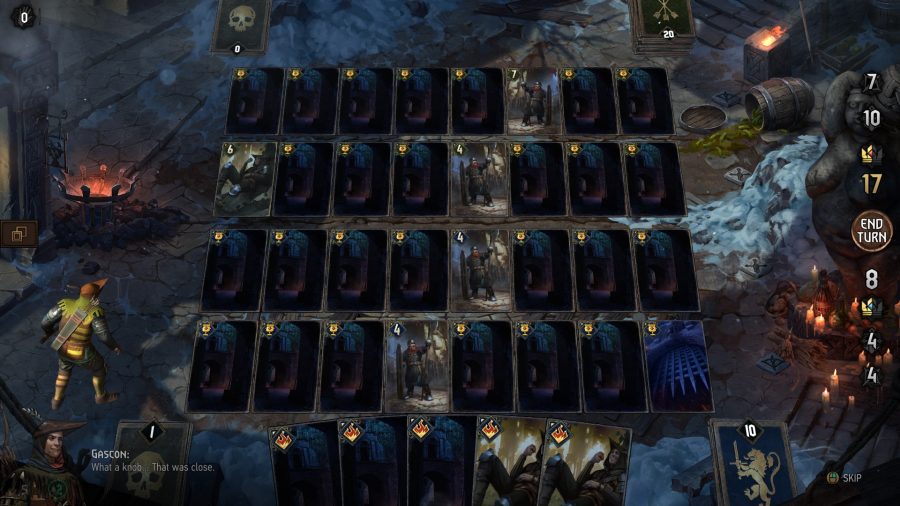 Whether it’s fighting a manticore so big its body is represented as separate cards, trying to out-drink a Dwarf, or sneaking through a fortress, Thronebreaker cleverly spins the rules of Gwent to embody any and all scenarios. Rather than trying to build an entire world, Gwent becomes the medium through which we interact with Thronebreaker’s story – the limitation stops being what can feasibly be built, and instead becomes the imagination of the people working on the game.

“I’m especially proud of the way we managed to build the story of Thronebreaker with relatively simple narrative tools, in a way that can still leave a lasting emotional impact on the player,” reflects Tomaszkiewicz. “I believe this was in huge part thanks to the craftsmanship of our amazing writers, but also thanks to excellent artwork that allowed us to visually piece the whole game together.” 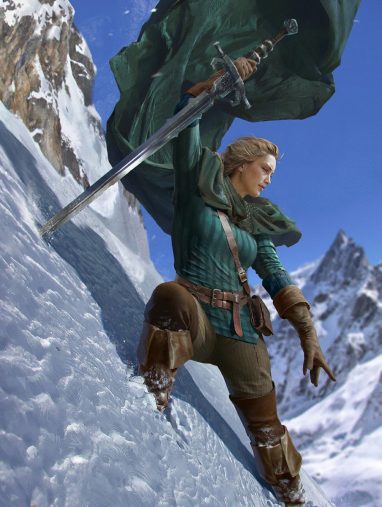 Smartest of all are Thronebreaker’s puzzle battles, which feel akin to solving chess problems. In each, you are given a set of cards, special rules, and a situation to solve, such as ‘stop the spotters escaping’ or ‘destroy the monster nest’. You go through numerous attempts on each, but eventually you realise how to use the cards together, and the synergy clicks into place – a wonderful microcosm for the deck building experience as a whole.

Thronebreaker even makes a tongue-in-cheek reference to another deck builder. Wandering along a road in the Dwarf realm of Mahakam, you find a puzzle battle at a tavern called Stone Hearth, where you must defeat the resident hero, Garth Rockstew – I wonder what game it could be referring to… 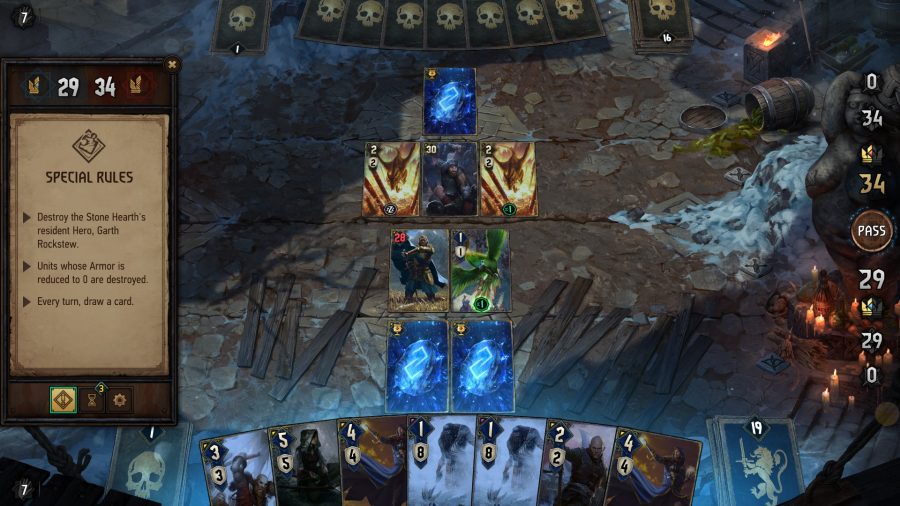 Worthy of a Saga

Along with the Hearthstone joke, Thronebreaker also references The Banner Saga, a game that inspired a good deal of its RPG elements. In Mahakam you find a red banner which Gascon says is "worthy of a whole saga"

Thronebreaker’s ability to create a narrative that feels so unique, yet separate to The Witcher games, comes from Gwent’s position as a Witcher-adjacent game. Gwent was always positioned between The Witcher books and the games, able to bring in characters from both, but never really belonging to either. The choice of Queen Meve as a protagonist, and the period that Thronebreaker covers, reflects that.

“I always really liked Queen Meve as a character in the Witcher books, as I felt her story was compelling, but she was always a secondary character,” explains Tomaszkiewicz. “She’s a warrior-queen who lost her domain and had to resort to guerilla warfare. I believed that story was a good fit for a card game where you’re gradually building an army.” 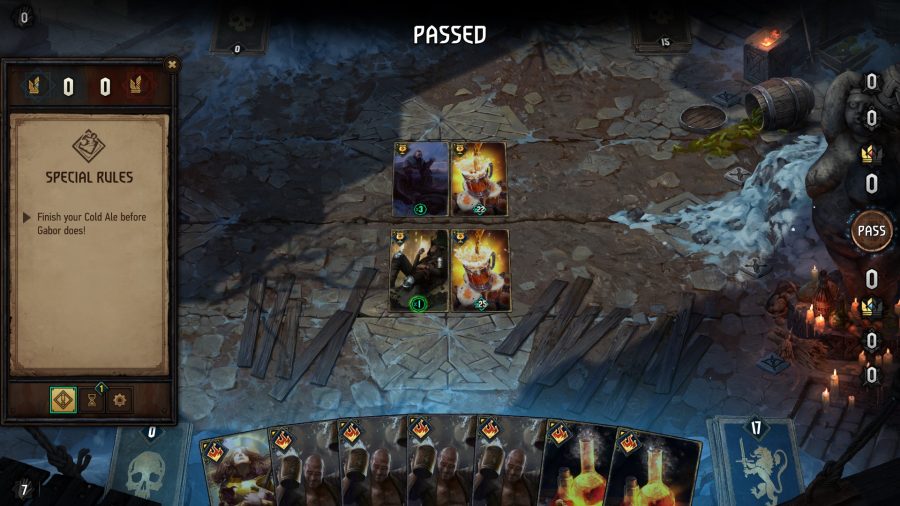 This position gives Thronebreaker the ability to flesh out stories that neither the books or the games can resolve. Thronebreaker covers the same period as the The Witcher novel Baptism of Fire, but it also explores that novel from an entirely different perspective. Both Queen Meve and Geralt’s company are witnessing the same Nilfgaardian destruction of the north, and those journeys eventually intertwine when Geralt meets Meve in the novel, but not before Meve explores never before seen regions of The Witcher.

“What excited me as a fan of this universe was a chance to explore areas we’d never shown before. Mahakam specifically was always part of the world that I wanted to see, since I love dwarves in The Witcher setting so much,’ says Tomaszkiewicz. “I also think Thronebreaker gives players a broader perspective on the world and the factions in it, and a better idea of why the people of the Northern Realms hate Nilfgaard so much.” 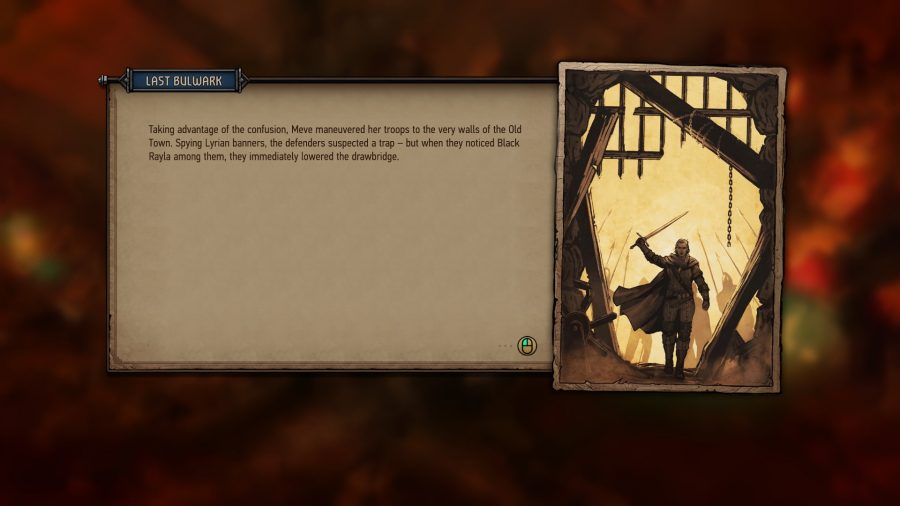 Though there are unfortunately no current plans for another Witcher Tales game, Thronebreaker does a fantastic job of carrying on the legacy of Gwent. It straddles both the books and the games, offering something to fans of both, but also a story, which, while owing everything to The Witcher setting, strikes off in its own direction.

Thronebreaker uses the established rules of Gwent, and the experimental approach that was forged by its beta to build a world and a story through cards – whether with crafty puzzles, dramatic narrative scenarios, or just fighting an epic battle. Though we may not get another game, Thronebreaker stands as a testament to what you can build with just cards and imagination:

“My favourite moments in Thronebreaker were the ones where we used cards to show abstract concepts: Queen Meve trying to flee the city of Lyria, Gascon having a drinking contest with the dwarves, and leading Knickers through a dark cavern,” reflects Tomaszkiewicz. “I enjoyed the moments where my objective was way different than in standard card battles, utilizing Gwent boards and cards in surprising ways.”

If you want to hear more about the game, read our Thronebreaker iOS review. The game is also set to launch on Android later this year.