You’re spoiled for choice where gacha RPGs are concerned on mobile, with options covering many huge franchises like Marvel, Pokémon, and Star Wars. So flooded is the genre that you’ll likely just stick to the one that features your favourite characters, rather than whichever is the objective best. With that in mind, it’s heartening to see the latest entry by Ubisoft bring a few ideas of its own.

Tom Clancy’s Elite Squad brings together a varied collection of heroes from the various different series that feature his name. That includes Splinter Cell, Ghost Recon, Rainbow Six, and The Division. It takes most of its gameplay cues from Marvel Strike Force, so expect to collect a bunch of shards that allow you to unlock and improve heroes, and spend a lot of campaign energy on repeating missions to get the vital resources to improve your gear.

But the gameplay is where Elite Squad stands out, and is unlike any gacha RPG I’ve played so far. Firstly, it understands that you’re simply never going to take manual control over your party (who does?), so it doesn’t even give you the option. Similarly, there’s no option to speed up battles, which isn’t actually a problem as they’re typically over in a handful of seconds anyway.

What it does do, is give you two active skills that you can unleash off-cooldown. These may heal your heroes, perform an air strike on your enemies, or pop a big shield to protect a hero low on health. There are six of these two choose from, and you can bring two of them into battle, swapping them on the fly between missions.

It brings a tactical flair to proceedings that encourages you to actually pay attention to the missions you play, rather than just let it do its thing in the background. Meanwhile, your heroes will use their own individual abilities, which are a joy to watch. Your medics will charge between cover to heal up wounded soldiers, your assault specialists will drop drones to blow up their targets, and your tank will taunt enemies into attacking them, instead of vulnerable teammates.

Battles are actually something to look forward to here, rather than something you just get out of the way to earn the reward

It helps that Elite Squad is a pretty good-looking game, with a wide variety of backdrops. You’ll battle in burning airports, snowy streets, and more, with your units rushing between cover and changing targets on the fly to target the latest threat. I rarely watch battles in gachas, but I found myself occasionally paying attention in Elite Squad, because it’s all such a joy to watch. 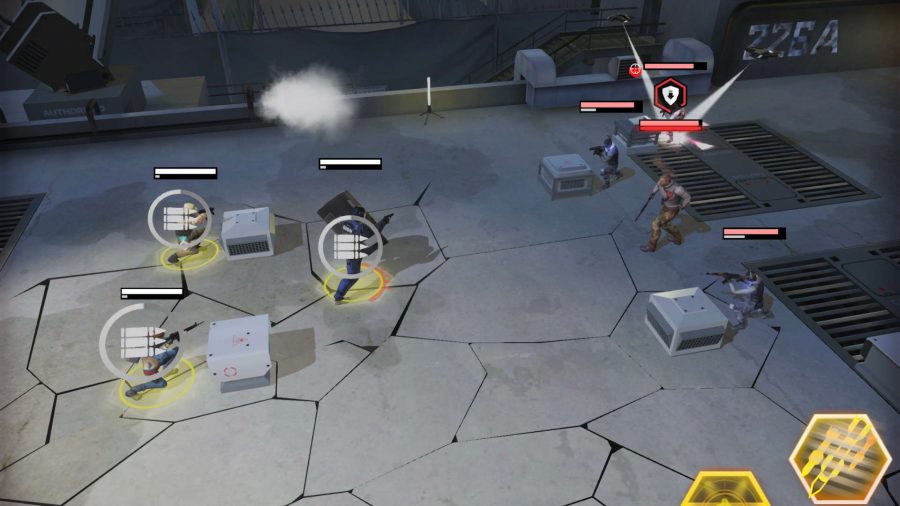 There’s also a wide variety of content to participate in, and energy refreshes at quite a pace. Granted, I’m fairly early game, but it’s rare that I’ve run out of stuff to do. It’s hardly innovative stuff, mind. It’s the usual story-driven campaigns, split between allies, enemies, and mixed, PvP, which is ranked, and a bunch of different events that run on a regular basis. You can also join a guild and participate in guild wars, working together as a team to gather valuable resources.

Overall, Elite Squad does follow a familiar gameplay loop; particularly for those that already play Marvel Strike Force. However, we thoroughly recommend Elite Squad, not just to Tom Clancy fans, but to those that are looking for a gacha RPG that offers something a little different. Battles are actually something to look forward to here, rather than something you just get out of the way to earn the reward.

A gacha RPG that makes you an active participant in battles, Tom Clancy's Elite Squad is well worth checking out