Looking to play some cards and take some names at the Yu-Gi-Oh! Master Duel fusion festival? You’re in luck. We’ve gone through all the purple powerhouses that make up Master Duel’s fusion roster, and picked out the most potent card effects and combinations so you can rocket up to platinum tier with your polymerized monsters.

Our Yu-Gi-Oh! Master Duel fusion decks guide has all the top-ranking sets ahead of the fusion festival, giving you the time to check out your combinations and mechanics ahead of the competition. As ever, there are a bunch of rewards on the line for gaining a high rank during the event, so you should play as much as you can to reap the benefits and pick up some extra boosters.

As with each of Konami’s Yu-Gi-Oh! Master Duel events, there’s an event-only banlist to keep things interesting by excluding a few OP options from play. Cards like Anti-Fusion Device, Succes Probability 0%, and Vanity’s Ruler, are all out of play thanks to their fusion combo ruining effects, as well as the exclusion of all link, XYZ, and synchro cards.

Like it has in the last few festivals, Konami has also removed some of the most potent meta-threats that aren’t hit by link, XYZ, and synchros bands – we’re looking at you here Eldlich, the Golden Lord – as well as removing some self-OTK combination cards to try and put a stop to players losing on purpose for quicker rewards.

The Forbidden & Limited card list for Yu-Gi-Oh! MASTER DUEL has been updated and the changes will come into effect from the 9th of May. For more information, check your notifications in-game.

To find the full list of banned and limited cards for the N/R festival, first go to the duel menu. From there, select the event duel option on the side of the screen, then click on event info. The following page should have a complete catalogue of all the banned cards for the event. Just keep in mind, that it’s a long one, and it might be quicker to search any cards you’re unsure of.

While most of the current main-game meta cards won’t make the cut for the Yu-Gi-Oh! Master Duel fusion festival, there are a few staples you can expect to still run into. Of these, Ash Blossom & Joyous Spring, “Maxx C”, and Nibiru the Primal Being, will all still be in contention, so include a couple of copies of each in your decks if you want to have some hand-traps to play with. With that out of the way, let’s get into our picks of the best Yu-Gi-Oh! Master Duel fusion decks. 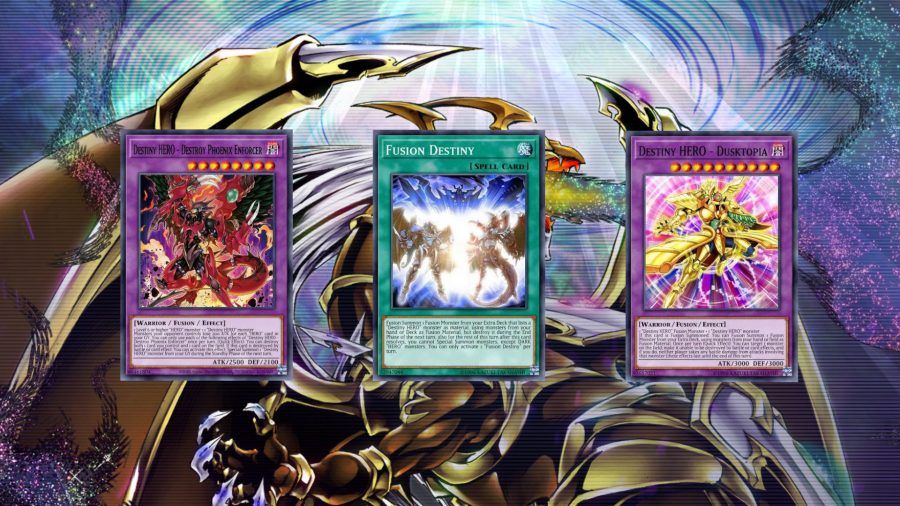 Destiny Heroes have been around for a while in Master Duel, but with the addition of some of the big-bad boss fusion monsters to the party, the league of dark caped crusaders has seen a significant power creep. The most important inclusion is Destiny Hero – Destroyer Phoenix Enforcer, leading the charge with its card destruction quick effect, as well as Destiny Hero – Dominance, and Destiny Hero – Dusktopia.

Like many other archetypes, the Destiny Heroes also have their own fusion-specific card in the same vein as Miracle Fusion or Power Bond. The potent polymerization substitute, in this case, is Fusion Destiny, and it really is a doozy, with the ability to fusion summon a Destiny Hero card using cards from your deck or hand. This means that you can summon to suit a scenario, and provided you’ve built your deck well enough, nearly any Destiny Hero fusion monster is an option.

Thanks to the new – structure deck, not only is the Cyber Dragons deck one of the better pure-fusion options, but it’s also one of the most accessible sets for players who don’t want to take the chance packing certain cards. Instead, by buying two copies of the new structure deck, you can add Cyber Dragon boss-monsters Cyber End Dragon, Cyberdark Dragon, and Cyberdark End Dragon to your roster, just in time for the fusion festival.

There’s an OTK strategy with the Cyber Dragons, though it isn’t nearly as consistent as it is effective. Essentially, if you can find a way to summon Cyber End Dragon using Power Bond, creating a monster with 8,000 ATK, and can find a way to attack directly that same turn, then the game is in your hands. Of course, this is dependent on what negates your opponent might hold, so be sure to stock up on some of your own countering cards. 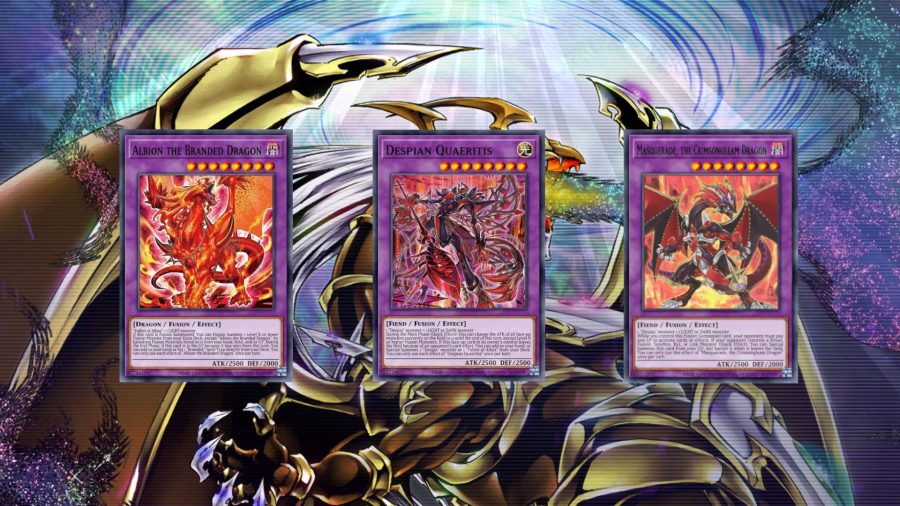 Looking for a dark-orientated control deck? Look no further than the Despia archetype, now with all their boss-monster fusion cards in the game, to frustrate your opponent to no end. Despian Quaeritis is the star of the show, shutting down any non-fusion monsters or any fusion monsters under level eight, so be sure to include three copies.

The Despia archetype has good synergy with Fallen of Albaz, and all the related fusion cards, to create a quick-summoning deck with a lot of potent quick effects. Just remember to include a low-level light-attribute monster, so you don’t have to sacrifice Quaeritis for an Albion the Branded Dragon fusion summon.

If you played any Yu-Gi-Oh! at all from 2005 to 2010 then you’re probably looking at this list thinking “where are Jaden’s Elemental Heroes?” Well give me a minute, won’t you? Of course, we couldn’t not include the Elemental Heroes on a list of the best fusions, especially in a world where Mask Change exists.

The staple cards for an Elemental Heroes deck in this day and age do look quite different to what Jaden used to play, though. You should look to include at least one Masked Hero, preferably Masked Hero Dark Law to keep “Maxx C” players at bay, as well as any combination of Elemental Hero Sunsire, Elemental Hero Absolute Zero, Elemental Hero The Shining, and Vision Hero Trinity. 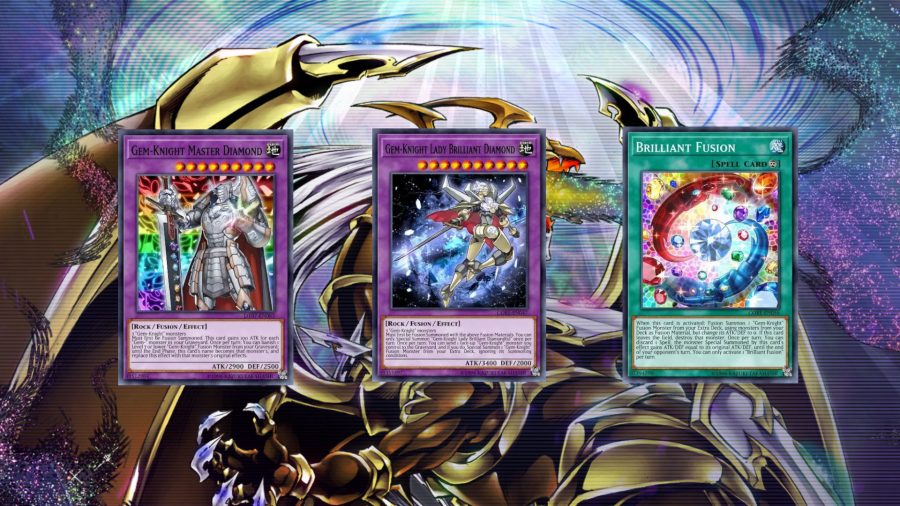 Having waited through XYZ, synchro, and link festivals, the Gem-Knights finally get their time to shine like the precious stones they are in the fusion festival. The staple trio are more obvious here than anywhere else, Gem-Knight Lady Brilliant Diamond and Gem-Knight Master Diamond occupying the boss-monster slots, and Brilliant Fusion working miracles to bring them out in no time at all.

Unfortunately, there’s a slight kink in the usual Gem-Knight chain with Gem-Knight Phantom Quartz having to sit this one out on account of it being a link monster. Fortunately, you can work in some Adamancipator cards for quicker summoning, or by popping in a copy of Instant Fusion for bringing out Gem-Knight Seraphinite and creating an additional summon.

Another archetype that has been waiting for its time to shine, the Thunder Dragons were already enough of a threat in the main-game meta, and rank even higher for the fusion festival. Known for their potent brand of destruction effects, Thunder Dragon fusions like Thunder Dragon Titan and Thunder Dragon Colossus are the last thing any opponent wants to see, especially when summoned by Thunder Dragon Fusion.

There you have it, our picks for the best Yu-Gi-Oh! Master Duel fusion decks you can use during the fusion festival. If all the talk of iconic sets like Elemental and Destiny Heroes in this article has you hankering for some throwback sets, be sure to browse our comprehensive guide to building a powerful Yu-Gi-Oh! Master Duel Blue-Eyes deck.