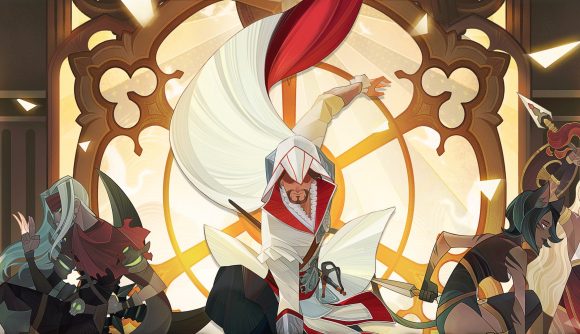 Lilith Games has announced that the loveable rogue from Assassin’s Creed, Ezio Auditore, is playable from today in AFK Arena. The Master Assassin is available for free during his first week, meaning you can try him out for yourself before deciding whether you want to purchase him for good. This character update comes after the news that AFK Arena recently reached 40 million downloads just in time for its first birthday.

For those that don’t know, AFK Arena is a fantasy idle-RPG well known for its unique art style. In the game, you build a party from a selection of 100 heroes belonging to seven different factions, and face off against enemy armies invading the land of Esperia. But as AFK is also an idle game, you can sit back and relax while doing this – letting your heroes fight for you to gain xp and rewards.

If you want to learn more, you can watch the snazzy live action trailer for the crossover below:

For those wanting to play AFK Arena, we’ve got plenty of content to keep you satisfied! Check out our AFK Arena tier list to know what characters are worth playing, and also our AFK Arena codes selection.

If you fancy checking out Ezio for yourself, you can download AFK Arena on Google Play and the App Store!