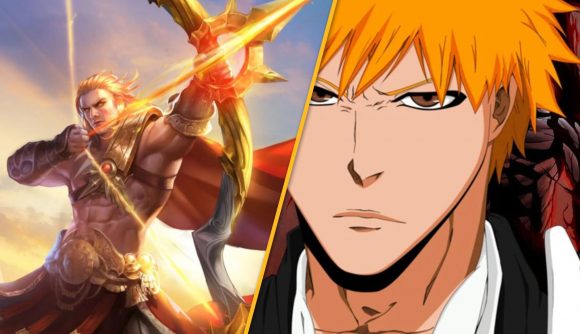 It seems that the last Arena of Valor x Bleach collaboration went well with fans, as they’re bringing back characters from the classic anime for another round. Five of the most popular arena fighters will get Bleach style re-skins this month in a limited comeback sure to send sparks, and katanas, flying.

We’ve seen anime additions besides the Arena of Valour x Bleach crossover in the game before with Sword Art Online. We’ve also seen icons from Japanese culture like Ultraman, but this is the first returning collaboration. All of the biggest names from the series are here for you to take into battle, with the sword-wielding Ichigo Kurosaki and the silver-haired Toshiro Hitsugaya both making an appearance among others.

You need to act fast, though, as the Arena of Valor x Bleach crossover is only in the game until the end of March. The good news is, that from today, the next time you load up Arena of Valor, Ichigo and the gang will be ready to slice and dice some enemies in classic Bleach style.

With Arena of Valor in its fifth year, we’re hoping this is just the start of the collaborations and additions to mark the milestone. Having added a new character in January’s massive Arena of Valor update, and with the Bleach boys causing chaos as we speak, there’s already been a lot to celebrate. But, like a late-night MOBA player who just lost their last battle, we already want more.

What Bleach characters are coming to Arena of Valor?

As well as Ichigo Kurosaki being a skin for Lu Bu, a few other series favourites are back in the game as unlockables. Toshiro Hitsugaya gets a turn as a Bright skin, Byakuya Kuchiki takes over from Murdad, while Lindis and Annette both get classic Bleach skins to mix up their battlefield look.

If you’ve already mastered Arena of Valor, or if you’re not particularly excited to see Bleach return, be sure to check out our guide to the best mobile MOBAs for a whole host of arena battling alternatives.