With so many IPs under its belt, it’s no surprise that you can find a huge selection of Nintendo gifts all based on different iconic characters and series. From the amiibo which provide unique in-game bonuses, through to plushies that let you hug your favourite characters when times are hard.

There are so many fantastic Nintendo gifts to choose from, that we couldn’t possibly list everything in one article. What we’ve tried to do instead, is to list a selection that covers most of the major Nintendo franchises. Whether you’re buying for somebody who loves Super Mario Odyssey, The Legend of Zelda: Breath of the Wild or Pokémon Sword and Shield, you should be able to find something for every type of Switch fan… especially those who love every game Nintendo brings out, like us!

So from Splatoon manga to Pokémon Funko Pops, we recommend these as some of the best Nintendo gift ideas. We hope that it makes your gift shopping for Nintendo fans just a bit easier and a lot less stressful. 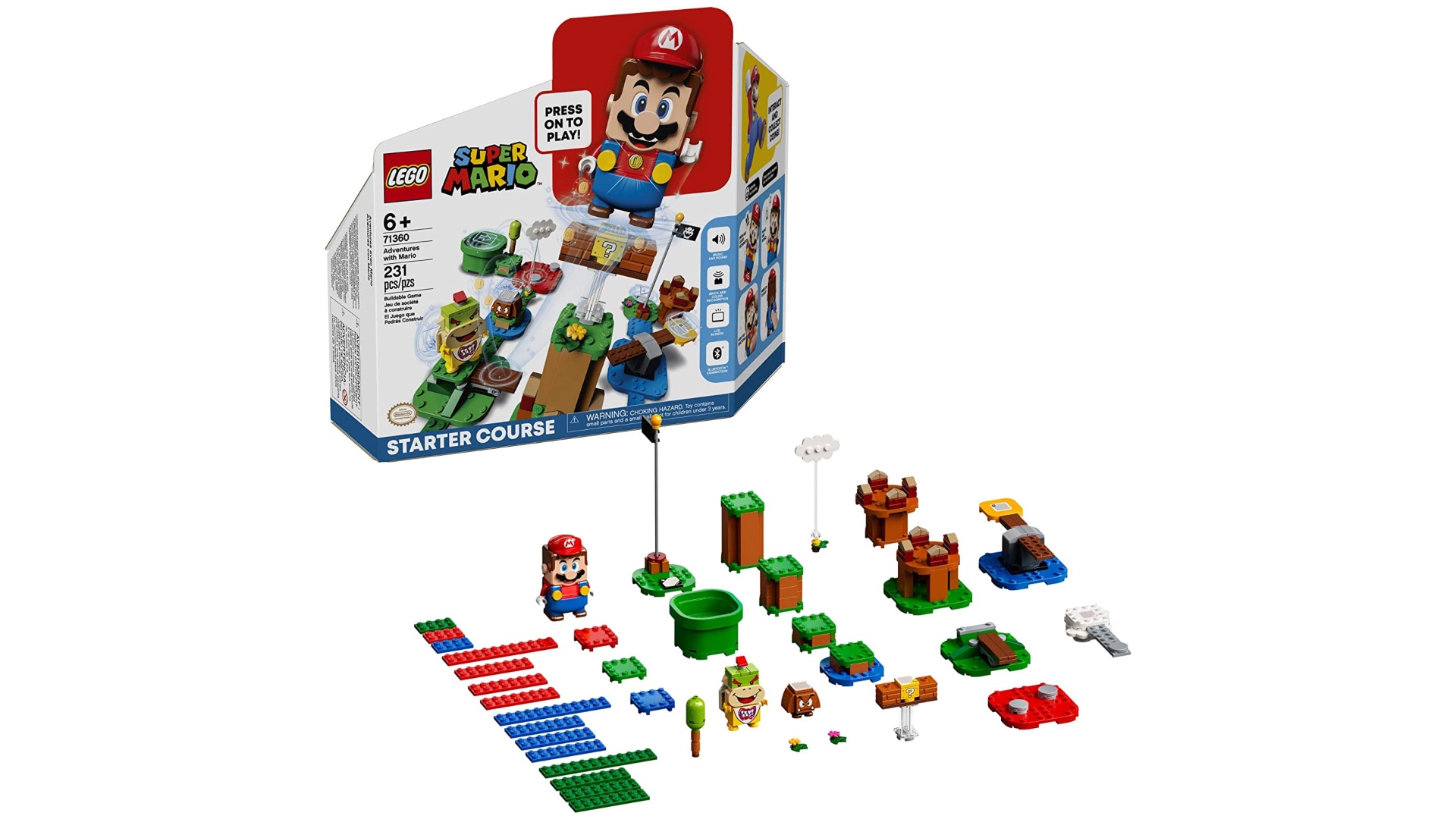 Mario and LEGO are two of the biggest names in children’s entertainment. Of course, it was only a matter of time before Nintendo collaborated with the Danish masters of plastic brick building to bring out the LEGO Mario range, but unlike most other Lego collaborations, this one’s a little different. The idea is that this LEGO set can actually be played like it’s a video game, with the Mario figure able to make special sounds (taken from the games) based on what you do with him on the set. It’s a unique way of bringing the Mushroom Kingdom to life.

There are two different starter sets for the LEGO Mario collection. Each one gives you a set based on different levels from the game. One comes with a LEGO Mario figure, plus Bowser Jr. and a Goomba, while the other comes with a LEGO Luigi figure, a Bone Goomba, a Pink Yoshi and Boom Boom. Who doesn’t want flipping Boom Boom in their house? Flailing his arms around and wrecking up stuff like the cousin we all love, but slightly fear.

Fun fact: he’s called Boom Boom because it was scientifically proven that players’ heart rates increased significantly whenever he was on screen (due to excitement) and Nintendo wanted a name that reflected that. (Disclaimer: I just made that up.) 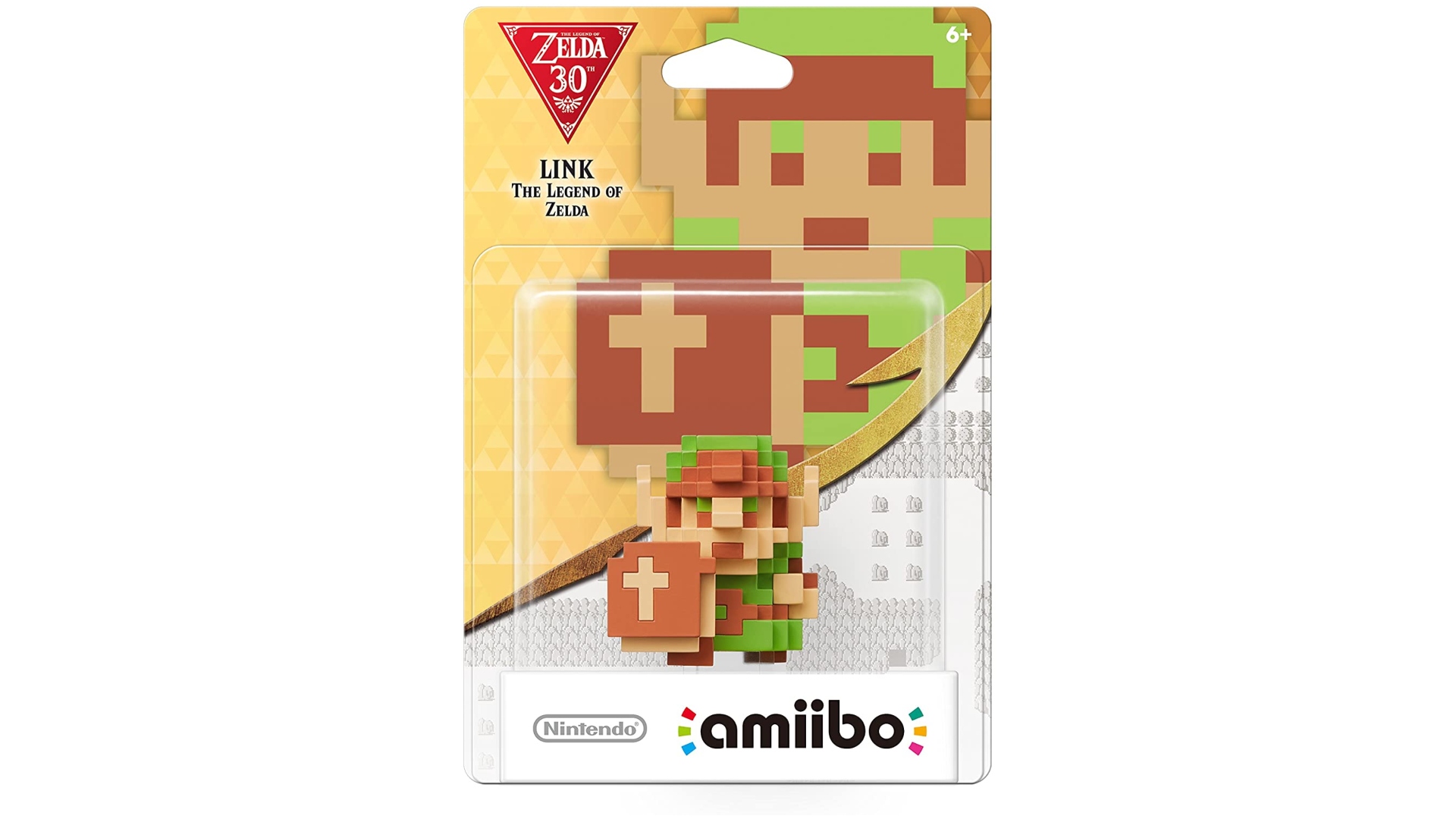 The Legend of Zelda amiibo

Thanks to Super Smash Bros. Ultimate, it’s hard to find a Nintendo series that doesn’t have at least one amiibo figure to its name. The series which has, perhaps, been best served by the amiibo line is the Legend of Zelda. Most of the games in the series are represented by one amiibo or another and so it’s a good route to go down when looking for Zelda gift ideas.

If someone loves the NES original, you can get them an 8-bit Link amiibo. If someone is a massive Breath of the Wild fan, then you can get them one of the many amiibo in the Breath of the Wild range. If they were won over by the cutesy design of the Link’s Awakening remake, well, by golly, that version of Link has an amiibo too. Find out what somebody’s favourite Zelda game is and, from there, you’ll almost certainly be able to find them an appropriate amiibo. 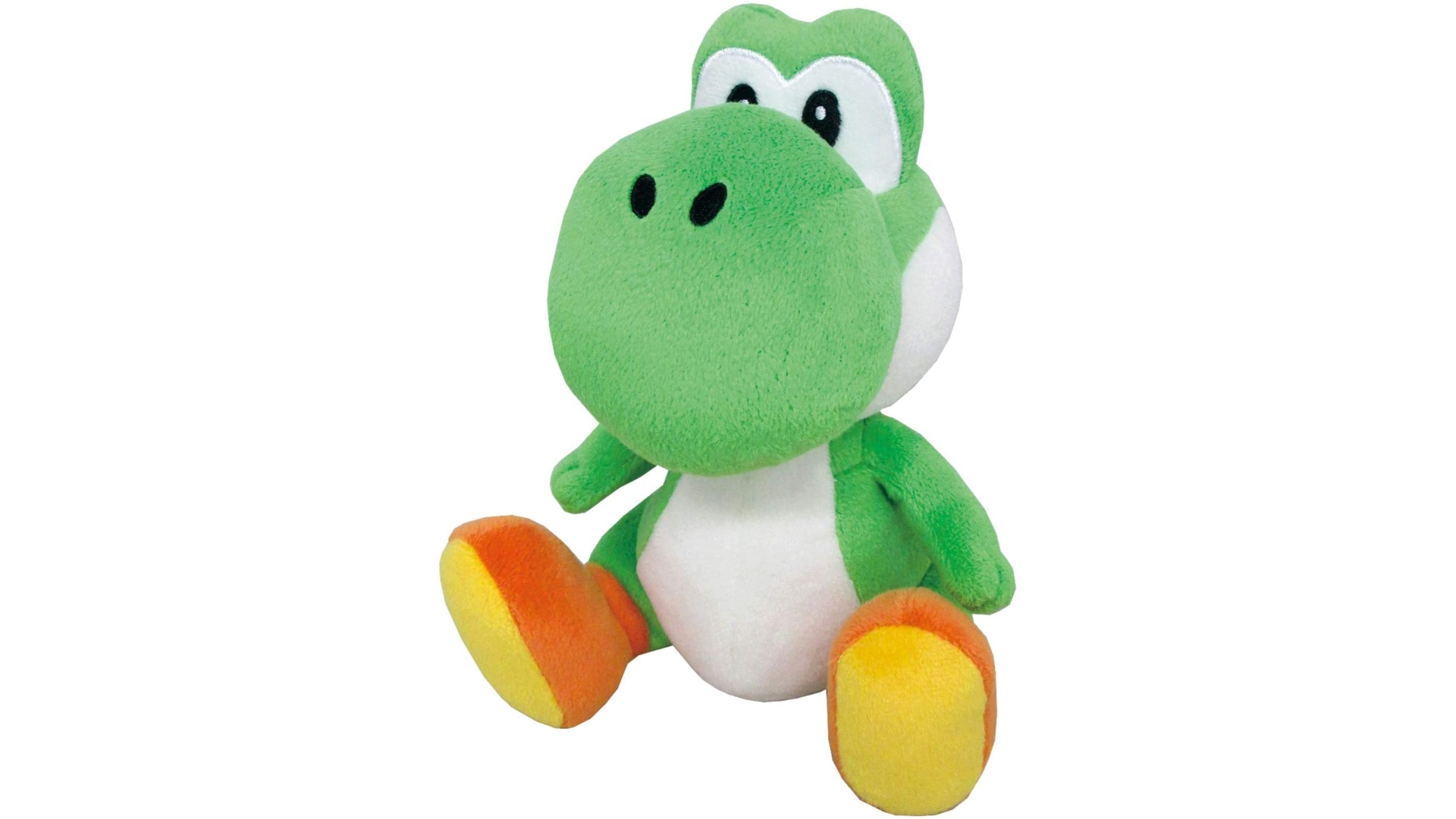 Yoshi is probably one of the most beloved additions to the Super Mario cast and, heck, that’s why he’s also the star of his own series of games. He’s a quintessentially cute video game character and so, if you know somebody who’s obsessed with this omnivorous dinosaur, then a Yoshi plush could be an excellent gift idea.

Having made his debut over 30 years ago in Super Mario World, Yoshi has since become one of the most iconic Nintendo characters of all time. There are many Nintendo fans out there who would love to get their hands on a lovely Yoshi plush. 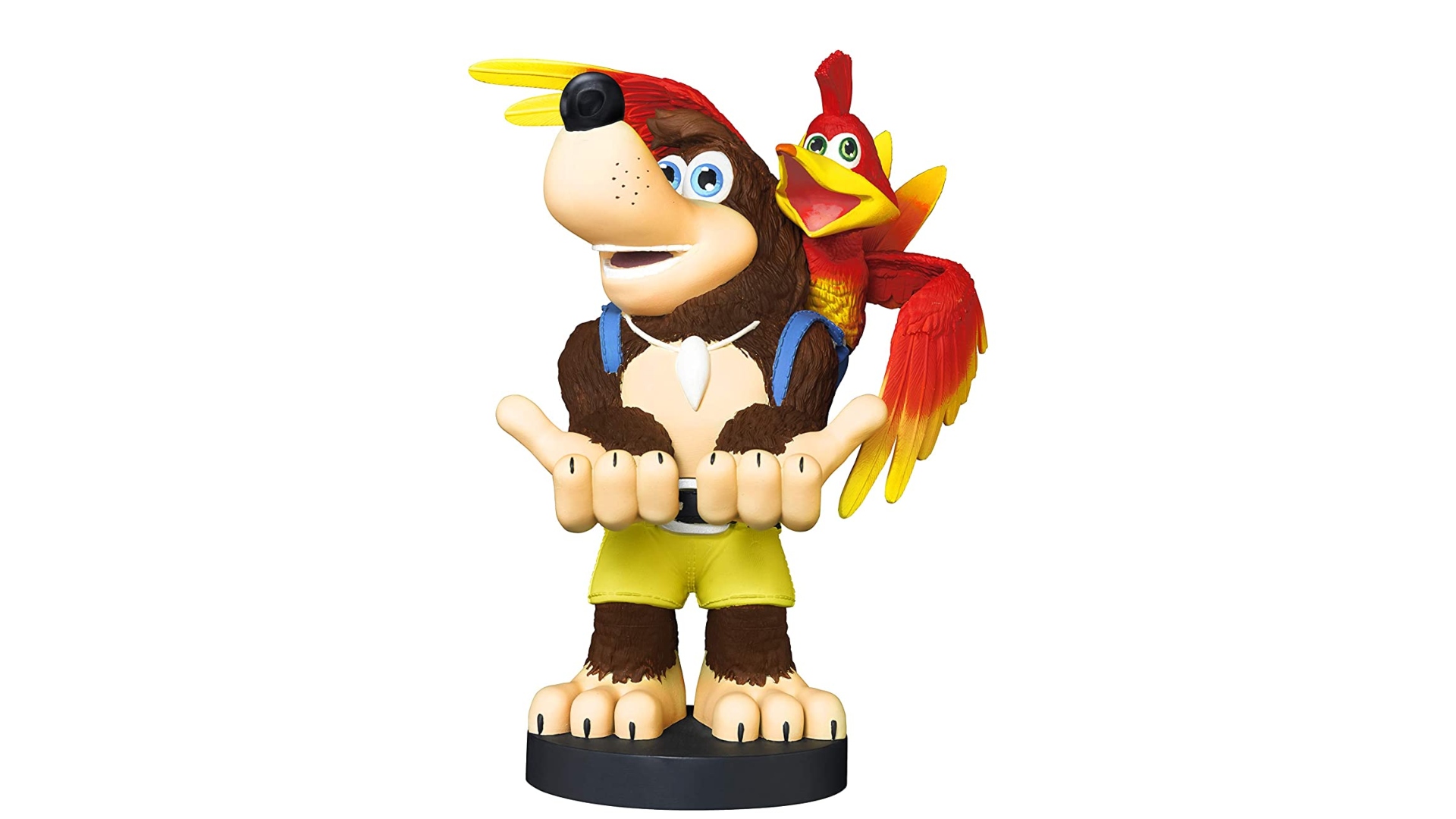 Lots of Nintendo fans love Banjo-Kazooie, and though for a long time it looked as if the characters would never appear on a Nintendo console again (other than in Minecraft), they made their triumphant return as part of the DLC for Super Smash Bros. Ultimate and now we know that their first adventure will soon be made available as part of the Nintendo Switch Online Expansion Pack. Hopefully there’s more to follow! Either way, a lot of newer fans will have discovered Banjo-Kazooie for the first time and might appreciate some Banjo-Kazooie goodies.

We have two recommendations for you. The first is the Banjo-Kazooie amiibo. Not only does it look great (with a sizeable Jiggy added as a platform for them), but as third party characters, this is one which could become quite rare, if Nintendo doesn’t renew their licence to produce them. We also recommend the Banjo-Kazooie Cable Guy figure, which can be used to hold controllers, phones and even Switches. An awesome little addition to any gaming space. 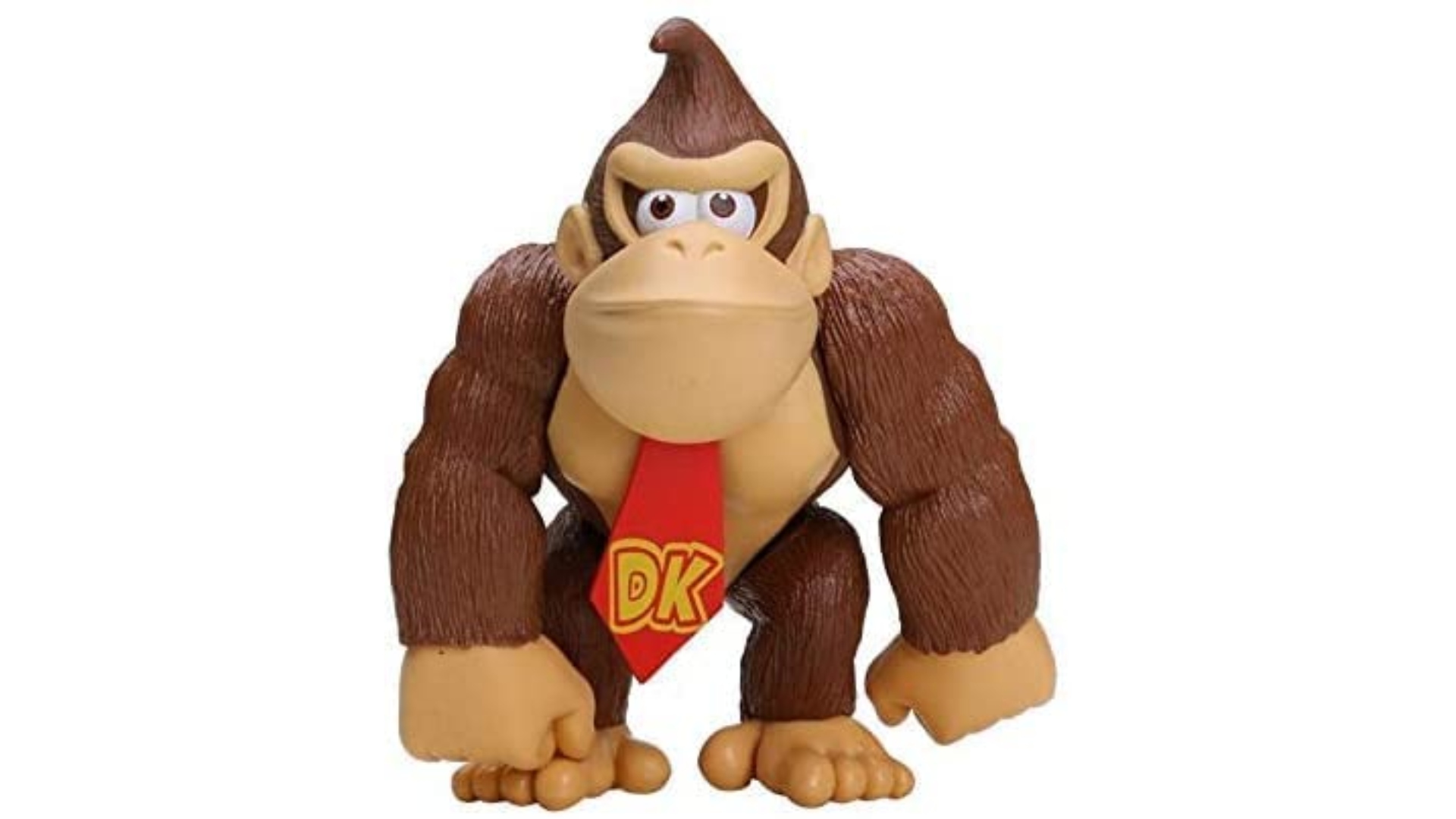 Everything’s coming up Donkey Kong at the moment. Dixie Kong made her Mario Kart debut. King K. Rool made his Smash Bros. debut. Donkey and Cranky Kong are confirmed to appear in the big Super Mario movie, along with plans for a dedicated Donkey Kong movie. Interest in this glorious ape (whose contribution to the big-monkeys-who-like-to-smash-things canon has to be up there with King Kong himself) is expanding all the time and many Nintendo fans may find themselves looking upon the Kong family even more favorably than before.

Some Donkey Kong action figures might make really good gifts. Younger or more imaginative fans can have fun acting out their own little adventures with the figures, while for other enthusiasts, they’d also look great when posed on shelves or desks. We’ve selected a few of the better Donkey Kong series figures below. 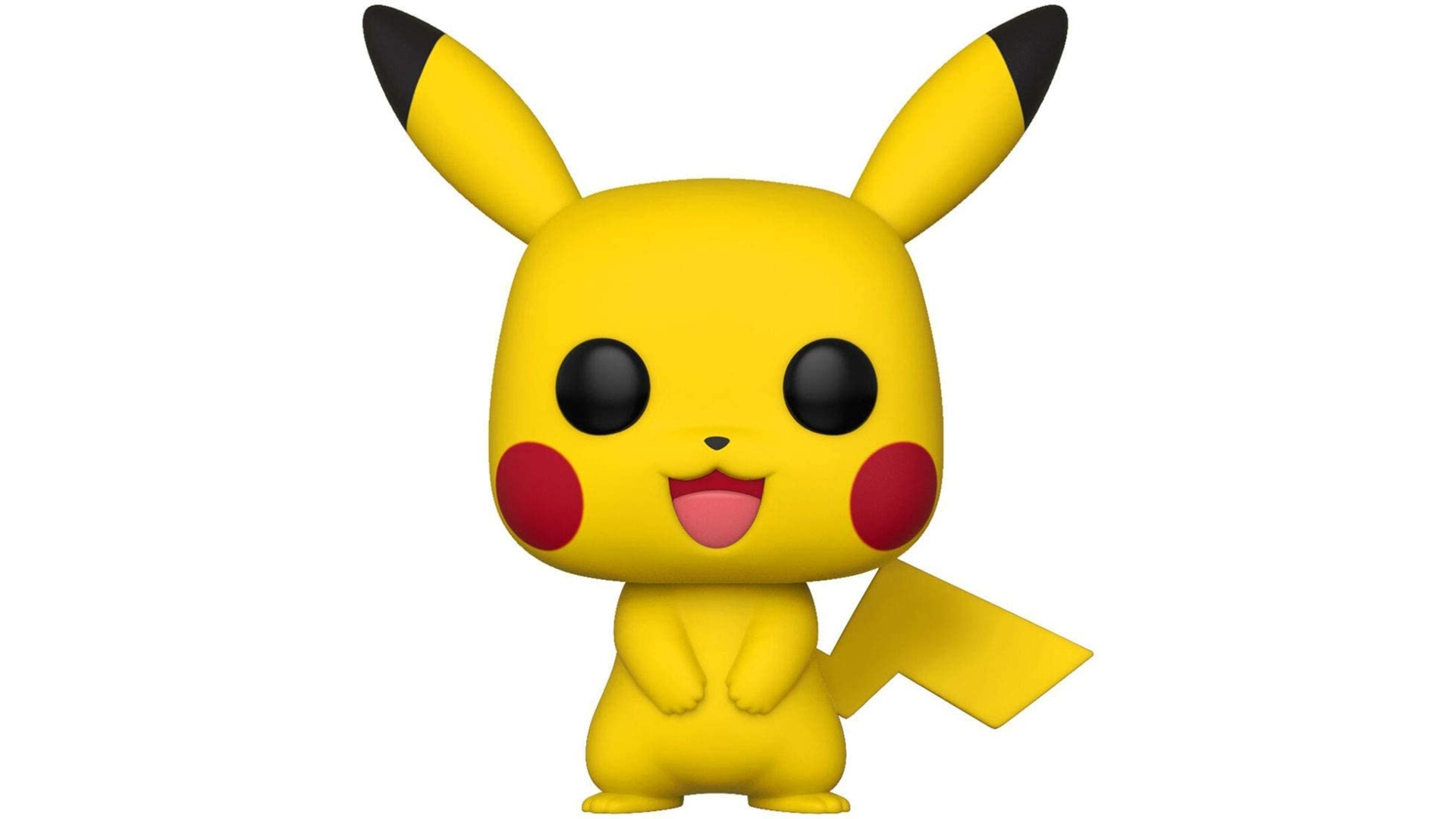 At this point in time, Pokémon is the only Nintendo franchise to have received a range of Funko Pop vinyl figures. Perhaps that’s because no other Nintendo franchise has succeeded in reaching the heights of cross-media popularity that Pokémon has: with over 20 anime TV series, 23 movies, an enormous trading card game and a whole heap of video and mobile games, the world of Pocket Monsters is vast.

Though Funko have only really begun to scratch the surface when it comes to Pokémon vinyl figures, they’ve been sure to cover some of the major choices. We’ve picked out five of the best of them for you below, including series mascot, Pikachu, the cuter baby version of Pikachu, Pichu, Mewtwo and Vaporeon, one of the coolest ‘eeveelutions’. 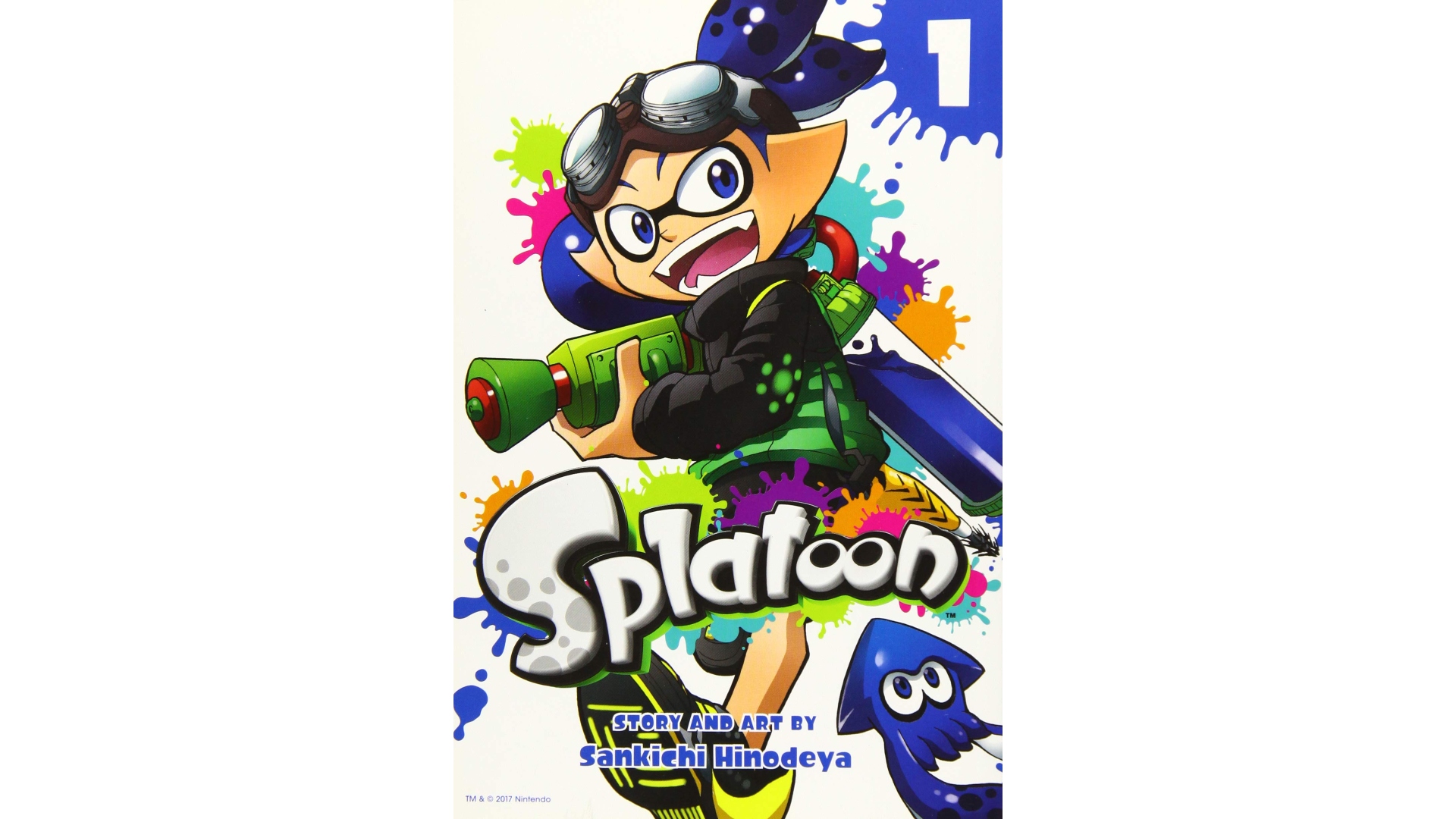 Splatoon is one of the most recent additions to the Nintendo family, although, at this point it’s almost seven years old. Gosh, how quickly they grow up. But already, this colourful shooter is popular enough to stand shoulder to shoulder with the big Nintendo series that have dominated the show since the 1980s.

Though it is primarily an online shooter, one of the things that make Splatoon so appealing is the cast of quirky characters and the well-detailed and fleshed-out world. The Splatoon manga gives a greater opportunity for fans to explore these aspects of the series and, hey, if you’re a parent who’s trying to get their kid to read more, this could be some great gateway reading material. Splatoon today, Dostoevsky tomorrow, as my tattoo says. 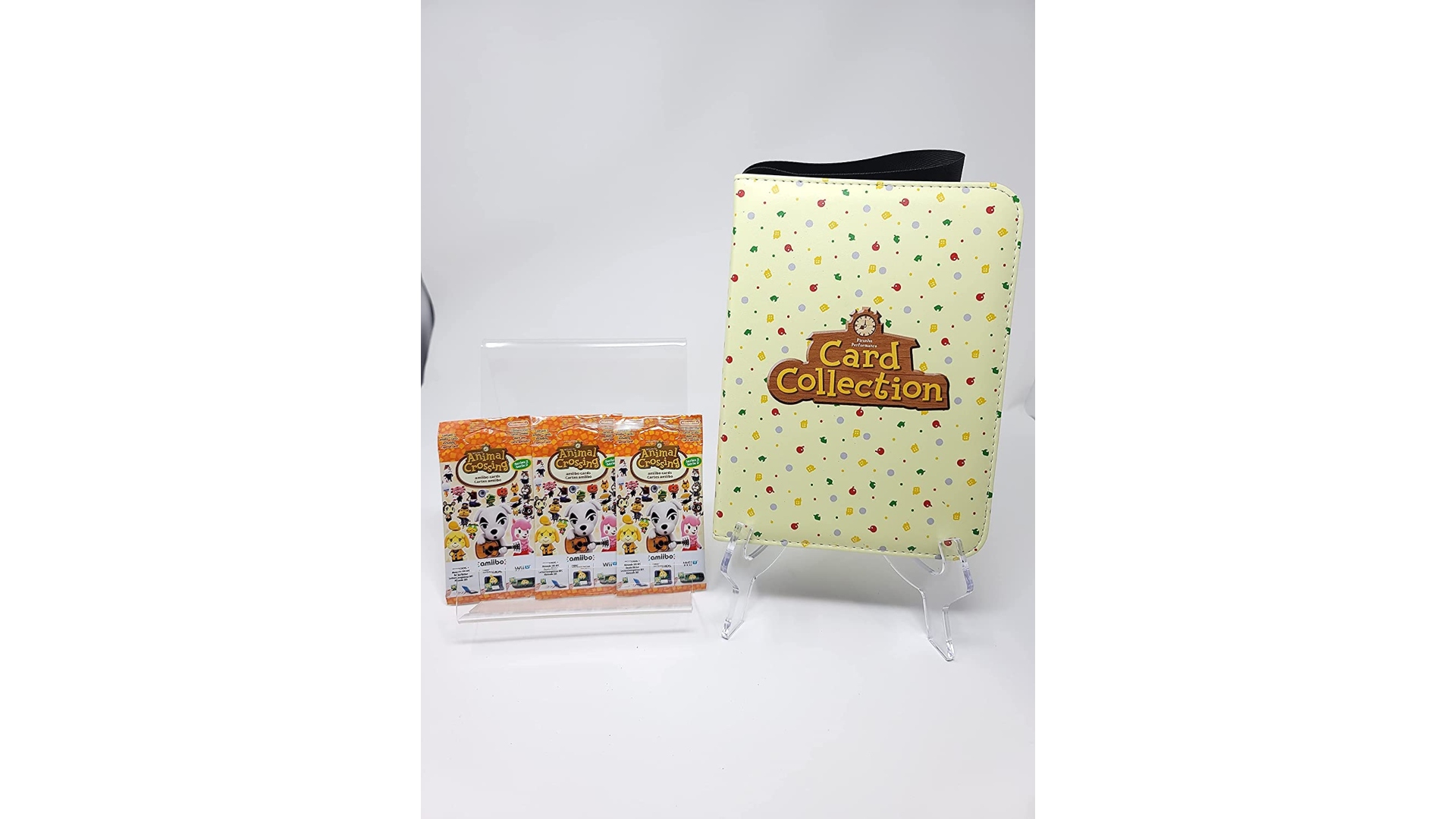 With the recent Animal Crossing: New Horizons update renewing interest in what has already been the most popular Animal Crossing game in the series, it’s safe to say that a lot of Nintendo fans have an appetite for quirky life sims at the moment. Nintendo have been producing amiibo cards to tie in with the Animal Crossing series for a while now and a whole load of new ones have just been released too.

If you know an Animal Crossing addict, why not get them an Animal Crossing amiibo card binder so that they’ve got a safe space to keep all of their amiibo cards stored? It’ll also give them an easy way to show their impressive collections off to their friends. Unfortunately, these binders are not currently available in the UK. 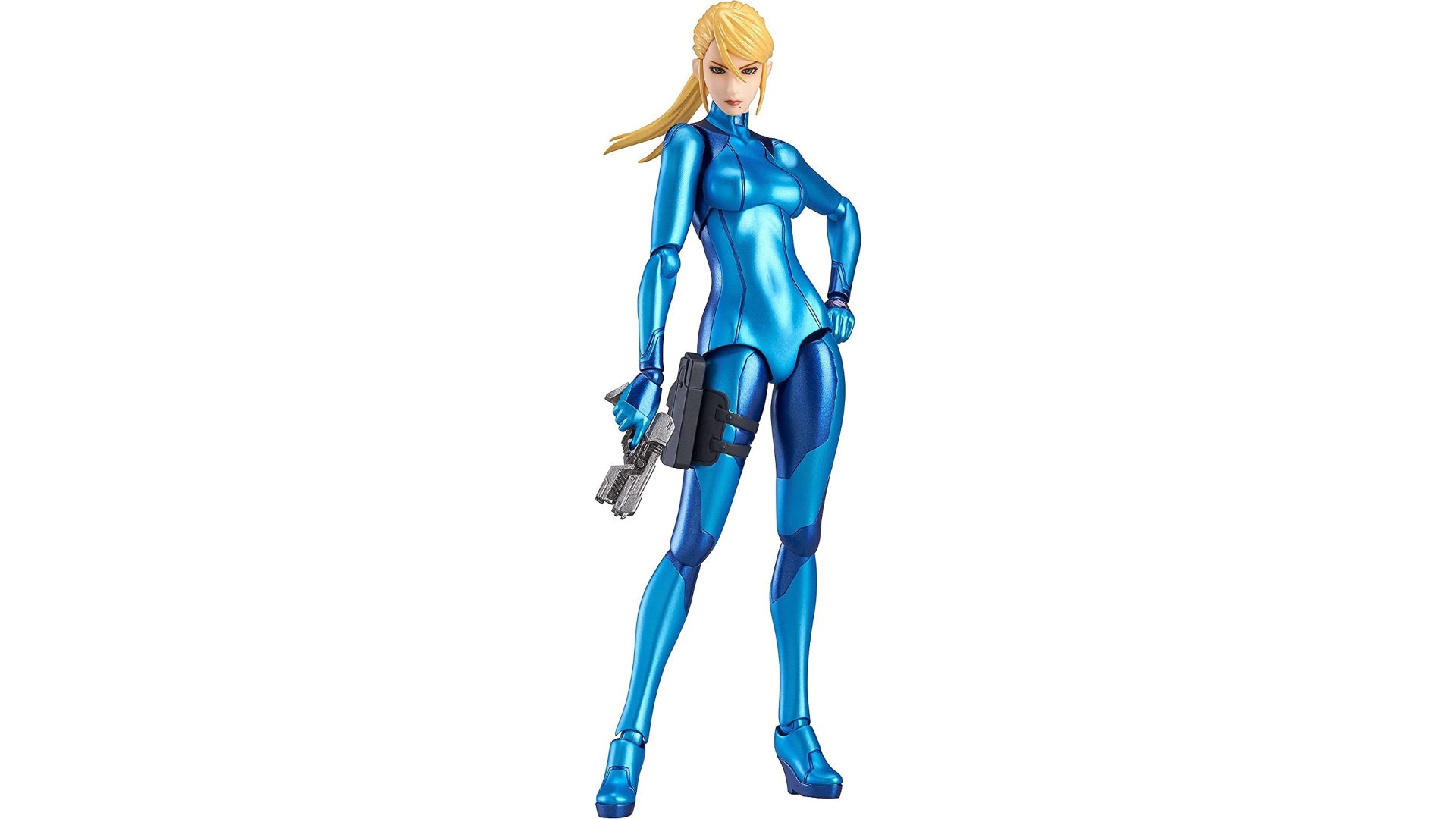 Though the series had lain dormant for a long time, the release of Metroid Dread has reminded everybody why they loved the series in the first place and re-established itself as an important part of the Nintendo landscape. Samus Aran herself also has the proud distinction of being one of the first female protagonists in video game history.

Fans of the series are sure to love this beautifully crafted Zero Suit Samus figure. You can pose her however you think looks coolest and she’ll stand as a fitting tribute to one of Nintendo’s most immersive and atmospheric game series. Unfortunately, this figure is not available in the UK. 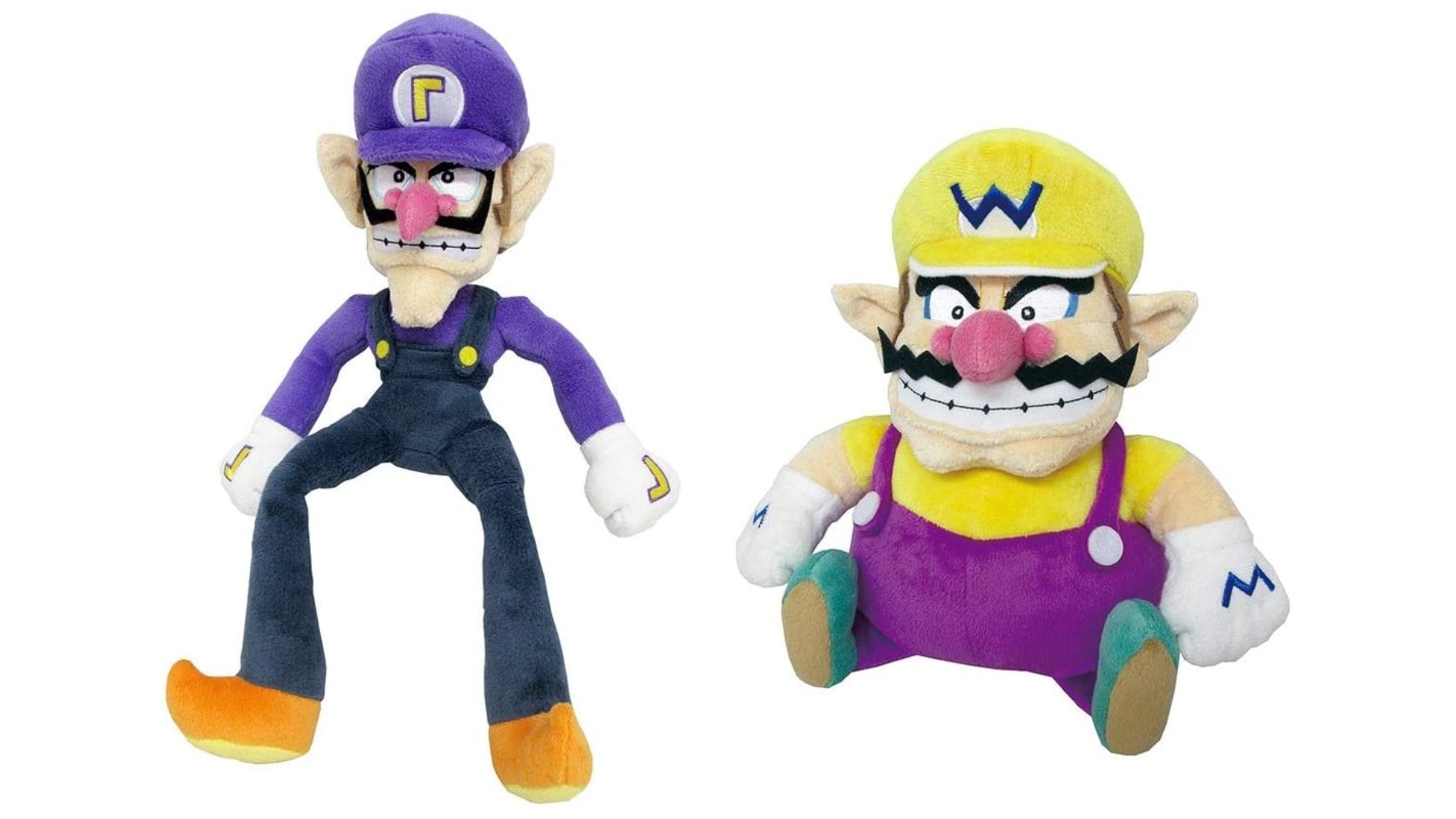 From their iconic waa-filled manner of speaking, through to their comedic bodily proportions, it’s easy to understand the charm of these two bizarre characters. Waluigi may not have made it to Smash Bros. but he did make it into your heart and if you were to gift these plushies to a fan in your life, he (along with Wario) would get into their heart too.

As two of the more colourful additions to the Super Mario cast, many fans enjoy playing as them in the various Mario spin-offs. These plush toys represent them wonderfully. If you know someone who always chooses them in different games, these would make a fantastic gift.

Of course, in addition to gifts like these, the one other thing that Switch players want this holiday season is… Switch games. Check out our guide on the best Switch games to get an idea of what desires lie within the hearts of Nintendo fans.