Another month, another heap of fantastic Switch games to enjoy, and we are more than happy to break down the very best October Nintendo Switch games for you! As it’s October – the spooky month – many developers are leaning heavily into the theme with a whole host of creepy creations to keep you up all night this Halloween.

So, what are the best October Switch games? Well, there are a few serious highlights this month, including the return of a classic – a much anticipated new entry in an overlooked franchise, finally making a triumphant return… That’s right, Super Monkey Ball Banana Mania is nearly here, and we’re going absolutely ape waiting for it.

Then there’s the small matter of Metroid Dread, the highly anticipated sequel to the GBA’s Metroid Fusion. Marking the first entry in the series for 19 years. This eerie entry launches alongside a brand-spanking-new console as well. The sleek Nintendo Switch OLED Model arrives just in time to make Samus’ latest adventure look absolutely glorious. So, let’s get on with the show; here are the best October Nintendo Switch games, with a couple of extras snuck in for good measure.

Let’s dive into the very best October Nintendo Switch games! There is plenty to get through… 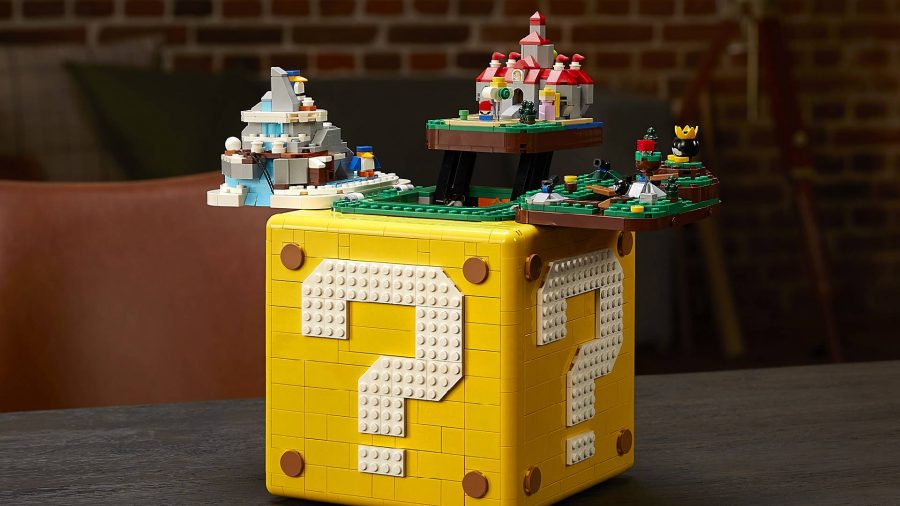 Yes, we’re kicking off the list with something that isn’t a game, but can you blame us? While the Lego Super Mario sets have been lovely, this is the first one to feel like a true realisation of the Nintendo and Lego partnership. This absolutely beautiful Question Block set opens up to reveal a diorama of multiple Super Mario 64 levels, including minifigs of Mario, Peach, and several other characters.

It’s a love letter to the classic title, coincidentally released almost exactly 25 years after its initial release, and it’s full of easter eggs for fans to discover. It’s also compatible with Lego Super Mario and Luigi themselves, so why not try stomping them around the set to find those hidden delights. 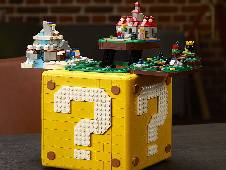 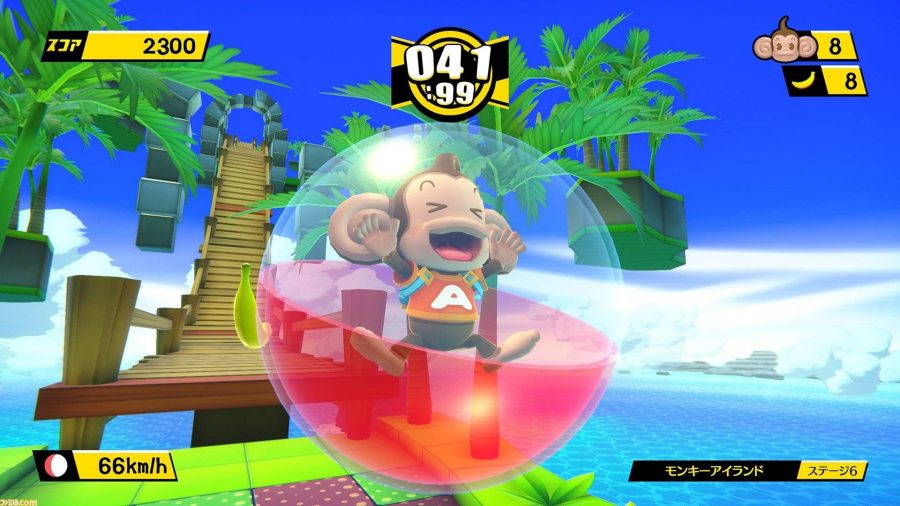 Have you ever wanted to be mates with a primate? And have you ever wanted to imprison them in a giant ball and make them tackle an obstacle course? Well, that’s weird, but you’re actually in luck! Super Monkey Ball Banana Mania is a spiffy looking remake of the first three Super Monkey Ball games, including several mini-games like Monkey Target and Monkey Tennis (I hope they’re paying Alan Partridge royalties).

SEGA has also revealed an incredible line-up of playable characters, so you can explore Monkey Ball’s precarious levels as Sonic, Tails, Beat (from Jet Set Radio), Morgana (from Persona 5), and even as various SEGA consoles. It’s as mad as a box of bananas, but we wouldn’t have it any other way. 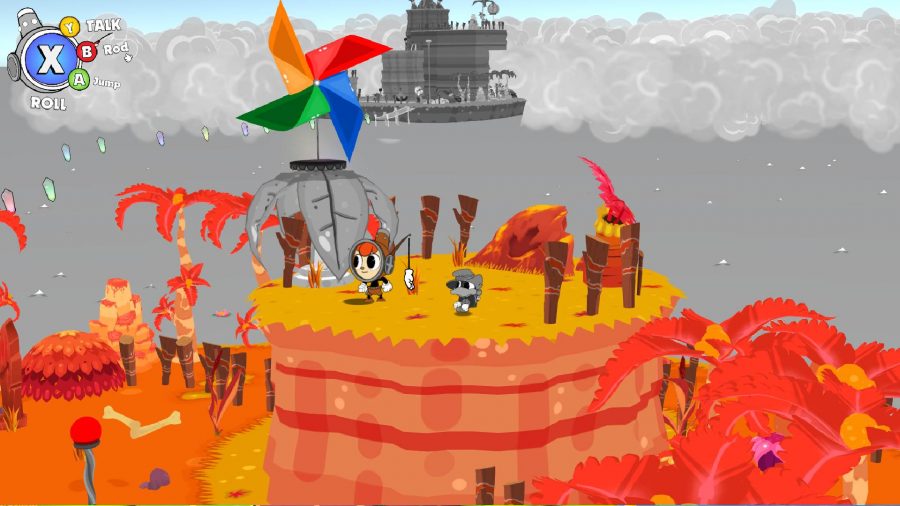 Rainbow Billy: The Curse Of The Leviathan – October 5

This gorgeous, colourful platformer will be making a splash on Nintendo Switch this month, as Rainbow Billy: The Curse Of The Leviathan brings family-friendly fun to the platform on October 5. The kid-friendly adventure doesn’t feature any combat, instead, you must bring colour back to the world by making friends and forging alliances, and the game looks beautiful as you do it. This promises to be a fantastic title for younger gamers, and honestly will likely look absolutely amazing on the Nintendo Switch OLED Model – if you want to let the kids touch it that is! 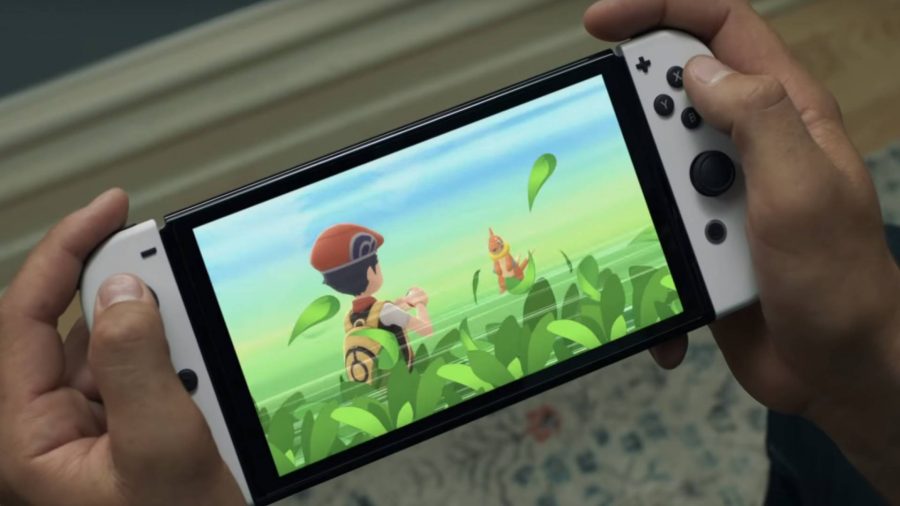 That’s right, we’re getting a shiny new console this month in the form of the Nintendo Switch OLED Model. The team have already been hands-on with this delightful device, and while it’s cliche, seeing really is believing. That gorgeous OLED panel display makes colours richer and blacks darker, bringing a more dynamic range to almost every title.

The screen is also bigger, using space where the bezel was previously on the Switch, making for a strikingly improved image. If you play your Switch handheld often, we can’t recommend this enough. The system also features a redesigned, wider kickstand, improved audio in handheld, and the dock even has an integrated LAN port. Altogether, this is a beautiful redesign of the Switch that any diehard fans will want to get their hands on. 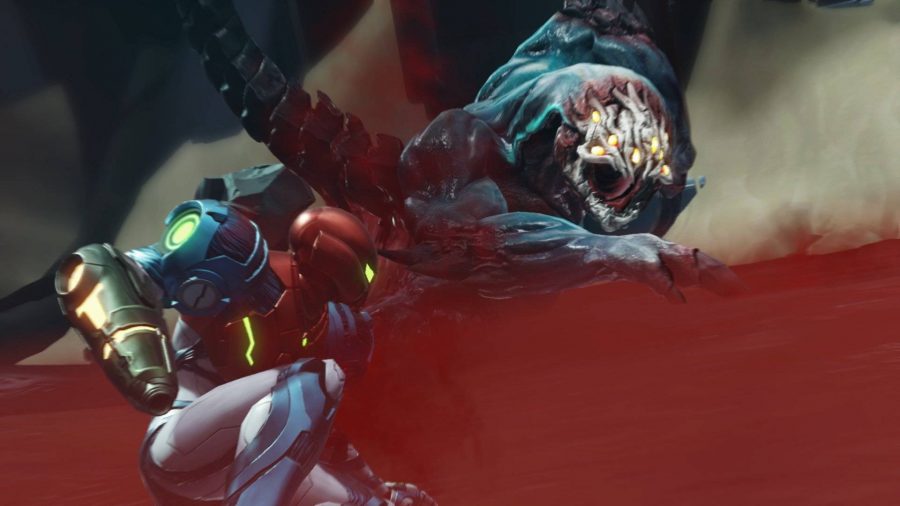 A 2D Metroid release is rarer than unicorn poop nowadays, let alone one that actually pushes the story forward, so you could forgive us for almost not believing our eyes when the mythical Metroid Dread was revealed earlier this year. Even better, we were lucky enough to play the game at a preview event and can happily inform you that this latest spooky adventure is an absolute blast, bringing Samus into shiny HD with real confidence. Meanwhile, the creepy E.M.M.I. robots add a later of fear to adventuring that really elevates the Metroidvania gameplay. It’s been a long time coming, but Metroid is finally back to reclaim its crown as the very best in the eponymous genre. Now, where’s a new Castlevania game? 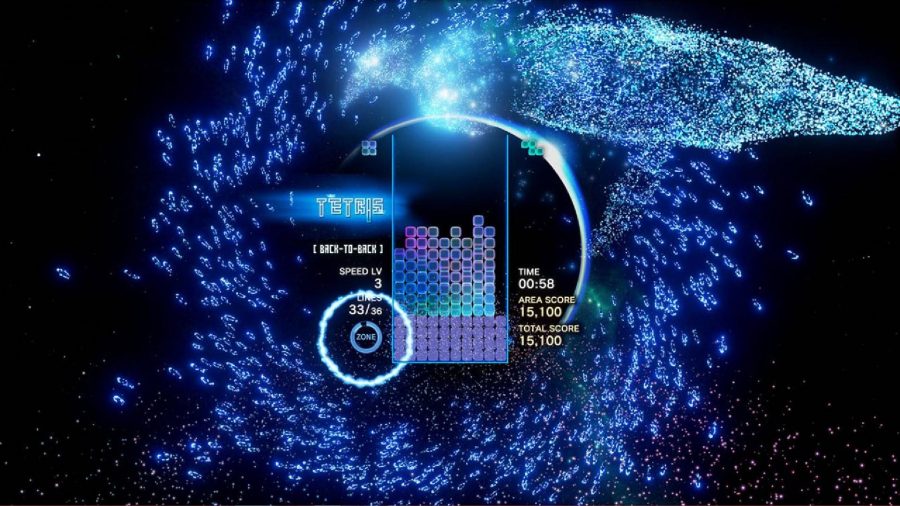 Nintendo Switch is quickly becoming the ultimate Tetris machine, but fans have been crying out for this trippy, emotional twist on the puzzler for years. Luckily, the technicolour marvel is arriving perfectly in time to make the most of the Nintendo Switch OLED Model, so this colourful gem will absolutely pop. The latest version, Tetris Effect: Connected, also features a suite of multiplayer features so you can take on your friends via the world wide web. From the team behind Rez Infinite, you’ve never seen Tetris like this, as it pulses, dances, and reacts to the music as you interact with the game, delivering an engrossing and emotional experience. If you thought Tetris would never make you cry, you might be proven wrong this month. 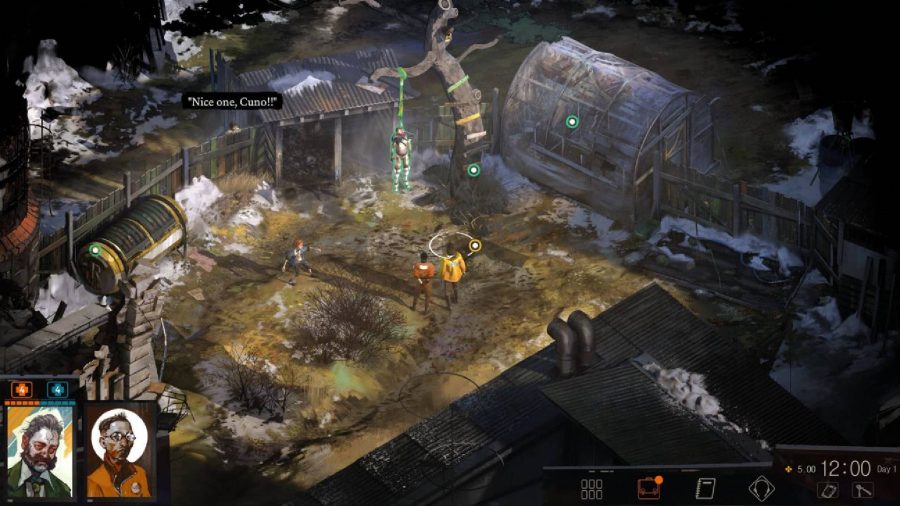 The smash-hit detective RPG Disco Elysium – The Final Cut finally makes its way to Switch, and brings a whole host of new content with it. This refined version of the original release features tonnes of additional content, full voice acting, and all the refinements the title has received since its release. This is a mature one, so definitely not for younger players, but if you’re after a deep, engrossing RPG with far-reaching consequences, this should absolutely be on your radar. 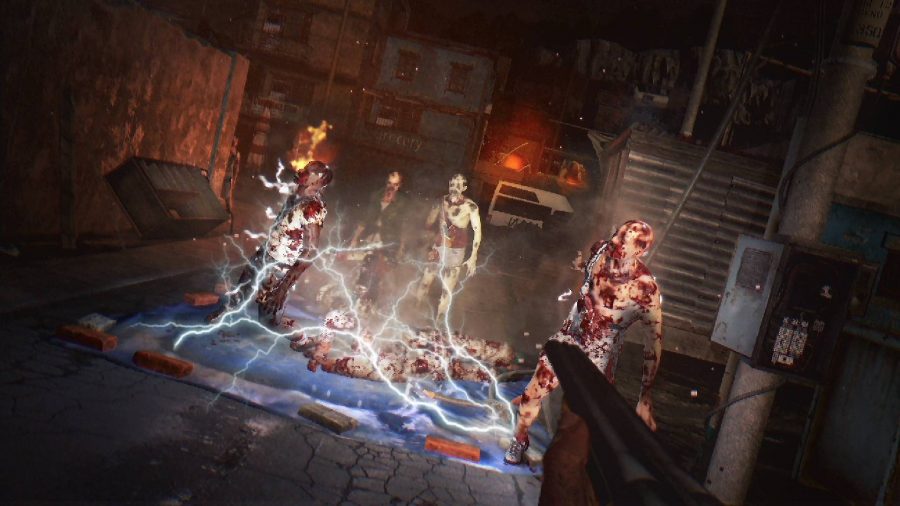 The acclaimed open-world zombie survival title makes its way to Switch with Dying Light Platinum Edition. This bumper package contains all of the available DLC since release, gyro aiming, and motion controls, making this a truly definitive release. With parkour-inspired, action-heavy gameplay, it’s more dynamic than most shooters and arrives just in time for the spooky season to boot. If you haven’t already played the title, this port could be the very best way to experience Dying Light. And if you have already played, well now it’s portable! 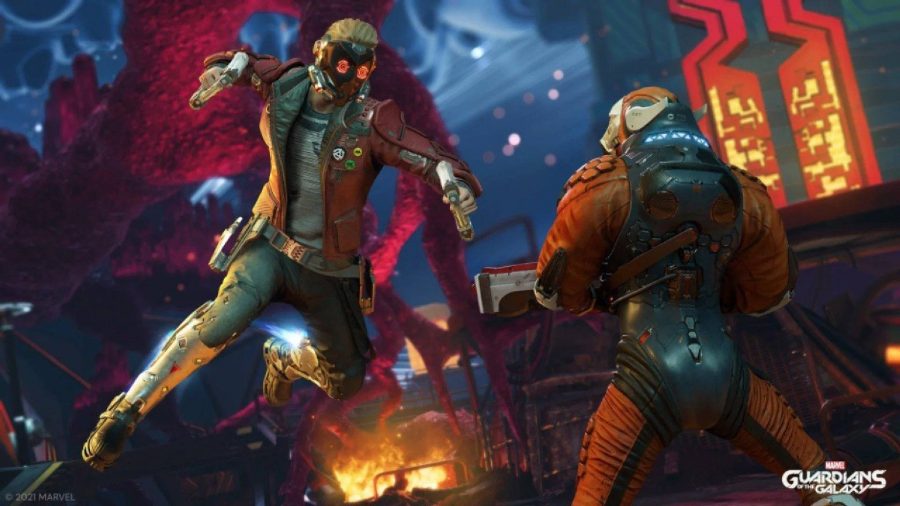 The galaxy’s mightiest heroes are fitting onto the world’s smallest home console, thanks to the power of the cloud. Square Enix’s Guardians Of The Galaxy is a single-player adventure, where you can take control of the legendary Star-Lord (who?) and battle alongside the other Guardians to determine the fate of the galaxy. Featuring an interesting redesign of the classic characters, developers Eidos Montreal (Deus Ex Human Revolution, Deus Ex Mankind Divided) are bringing their own personality and flair to the series. While it’s sad we’re not getting a native version, cloud technology means this title will look just as good as versions on more powerful consoles, just make sure you have a stable internet connection. 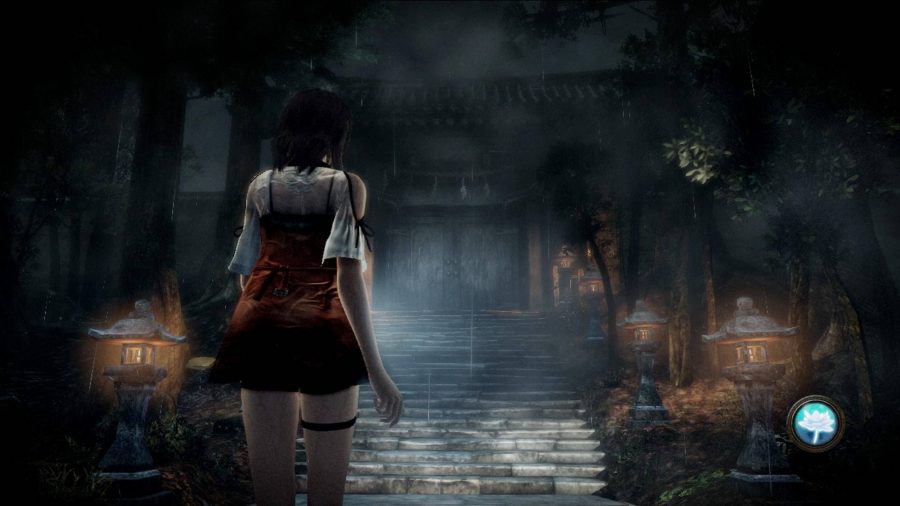 Well, here’s a WiiU port we weren’t expecting, but it’s lovely to see this spooky adventure get another shot! Fatal Frame: The Maiden Of Black Water is a gothic horror inspired title with a focus on photography, releasing on Nintendo Switch just in time to celebrate the 20th anniversary of the Fatal Frame series.

Players will use the camera obscura, a “special camera capable of repelling vengeful ghosts and sealing away their powers, to explore Mt. Hikami and the numerous incidents that took place there in the past.” This updated version also includes an improved screen resolution, adjustments to controls, and even some additional content. Fatal Frame has never been better, and with the Nintendo Switch, it’s poised to hopefully find the audience the series deserves. 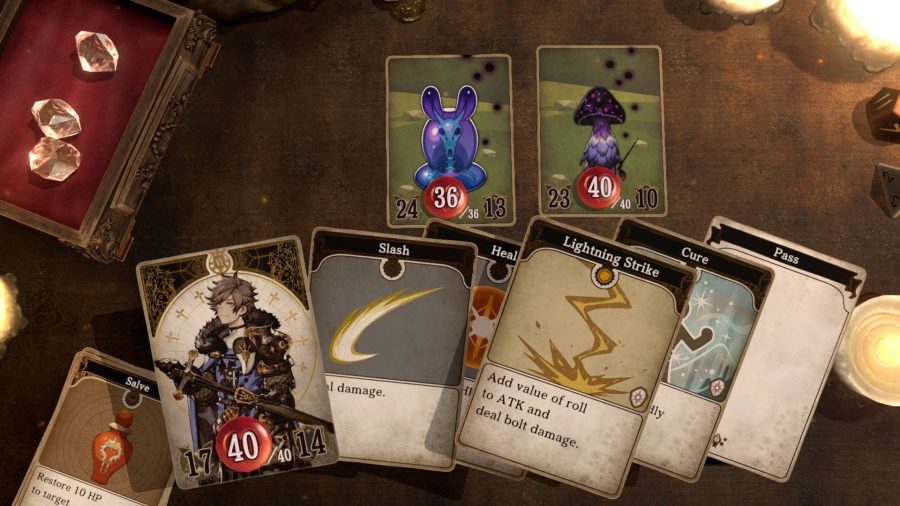 A card-focused RPG from acclaimed creator YOKO TARO, this strange game is one that you’re either incredibly excited for, or have no idea about. The snappily titled Voice Of Cards – The Isle Dragon Roars, is an epic fantasy, told through the medium of a tabletop RPG, and plays out through the narration of a gamemaster. It’s hard to get its appeal through pictures, so it’s worth watching a trailer to understand the mood of the title. But with creative director YOKO TARO at the helm, anyone familiar with his work on Nier might have an inkling of what to expect here. 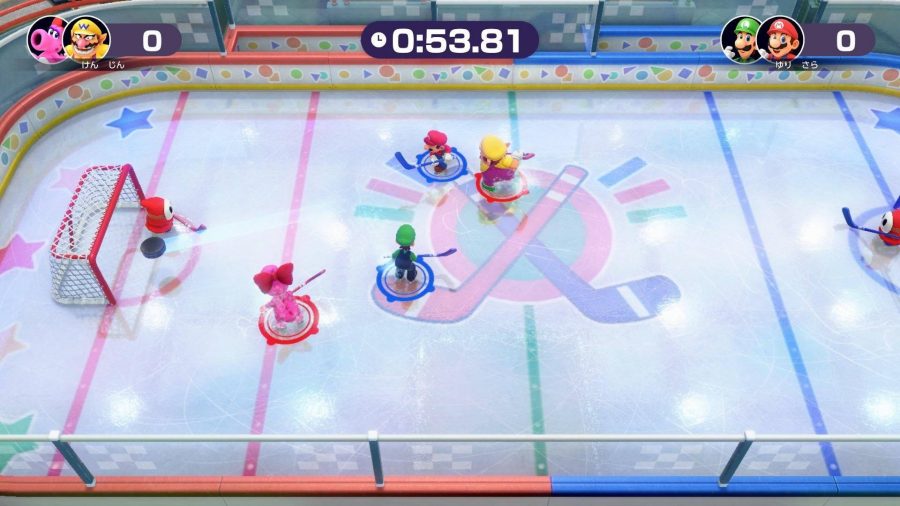 Well, it’s not a party with Mario and his mates, and this month we’re being treated to the brand new Mario Party Superstars. This latest entry brings together some of the most iconic mini-games and boards from classic Mario Party titles, such as Mario Party 4, 5, and 6 inglorious, shiny HD. In a distinct shift from the previous entry, all games are playable with button-based controls, meaning no waggle-focused mini-games (get in the bin Trike Harder), and making it easier to play alongside Nintendo Switch Lite owners. Speaking of multiplayer, this entry will also feature full online multiplayer modes at release, as well as some smart accessibility changes like the ability to pause and return to online matches. The stars look like they’re aligning with this release, and Mario Party could truly be reaching its peak.

Right, that is our exhaustive list of all the good things to look forward to this October. There are plenty of spooky treats for Halloween fans, as well as some beautiful titles to make the most of the vivid new Nintendo Switch OLED Model’s screen.

If you have just picked up the OLED Model and are understandably strapped for cash, you can check out our guide for the very best free Nintendo Switch games to save a few pennies, or head on over to our list of the best Nintendo Switch RPGs to find titles to get lost in with your nifty new device.