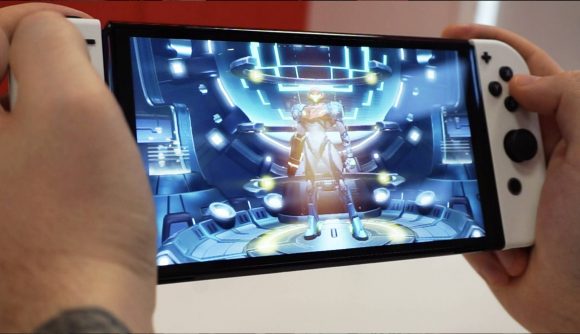 It feels completely surreal to finally be holding the sequel to Metroid Fusion in my hands. Not only that, but the title card even pops up with two words I’ve heard for over a decade but long considered forgotten, Metroid Dread. To say this feels like the culmination of a long story is an understatement. Metroid Dread somehow embodies the lasting legacy of the Metroid franchise, but also has the weight of countless incredible games behind it. Can it truly live up to the excellence of past titles? And will this story be able to do justice to the 35 years of history it has to finish? Well… I have some good news

When starting up Metroid Dread it’s immediately apparent how premium this feels. Any arguments about a 2D game being worth £50 can get in the bin, as this entry feels like a high budget space epic thanks to the opening cutscene, which handily recaps a lot of Metroid lore, as well as the gorgeous graphics.

The dramatic opening sees Samus attacked by a terrifying-looking Chozo, before being left stranded in the bowels of ZDR and having to fight her way back to the surface. Samus now has to contend with not only the mystery of the previously friendly Chozo warriors, but also faces the prowling menace of the E.M.M.I. robots. These sleek machines have been programmed to hunt Samus, and they’re very adept at doing so.

From the first few moments of gameplay exploring Artaria, the first area you discover, Metroid Dread also feels like a perfect showcase for the OLED Switch, thanks to the deep blacks and bright neon blue of technology piercing the darkness with every swoosh of an arm cannon. While exploring cave systems, as the backgrounds sunk into the distance and water trickled over ledges in the foreground, the sharp colour and rich blacks give character to caves in the distance, reminiscent of the 3D effect on a New 3DS. Then while interacting with Samus’ AI companion in save rooms, the computer pulses in reaction to the ethereal robotic voice of Adam, and the luminous blue of the screen is almost hypnotizing in its vibrancy. 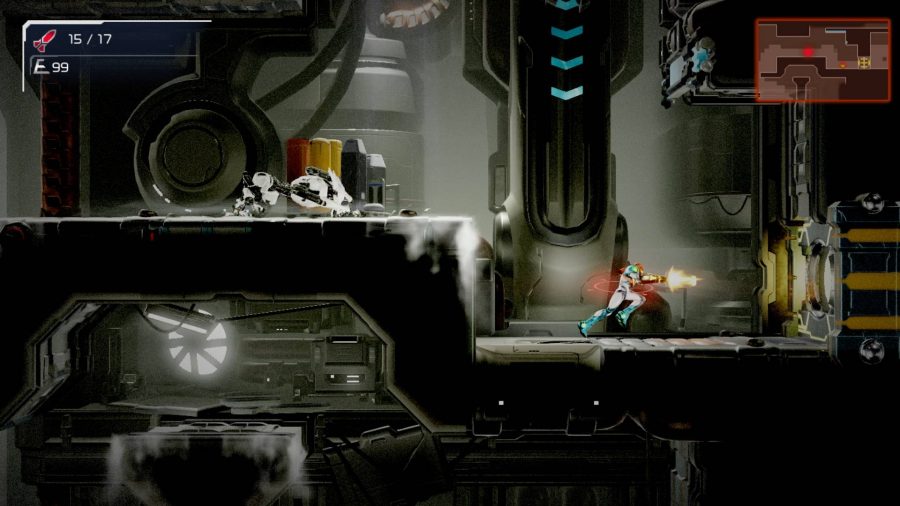 When you start moving, the first thing you’ll notice is that Samus feels fast – very fast. I had to go home and play Samus Returns after to check I wasn’t imagining things, but in Metroid Dread our favourite bounty hunter feels markedly more athletic from the beginning, which is probably a good thing as you’ll be stalked by the similarly proficient E.M.M.I. robots before long. Like in Samus Returns, Samus still has the same ability to freely aim her cannon with the analog stick, and can lock in place with a shoulder button. The physical counter also returns as a way to quickly dispatch enemies.

I noticed that while most enemies had a glaring opening for the counter mechanic, they also all took damage from regular blasts as well. Where in Samus Returns gameplay sometimes felt stilted as you often had to wait for an opening, here you can blast away as normal, and a successful counter is just a glorious addition to your damage toll. It helps make the flow of combat feel much more fluid, and made me more appreciative of the counter off the bat.

Another immediate benefit is the sense of atmosphere afforded by both the detailed visuals and incredible sound design. Playing on the OLED screen, with the enhanced speakers to boot, this is an instantly gripping world. The sounds of distant enemies squelching over platforms, running water underneath Samus’ feet, and the shrill echoing beeps of the E.M.M.I. add up to build a palpable sense of… well, Dread. 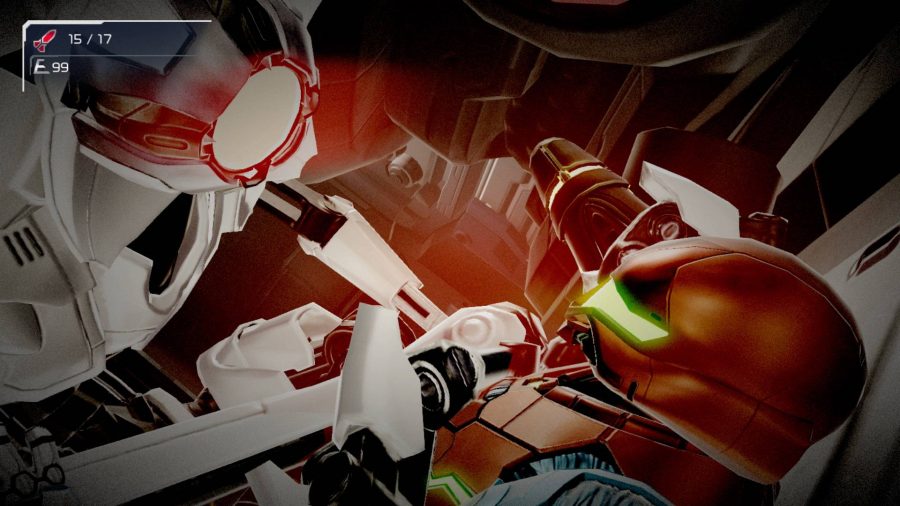 Speaking of the E.M.M.I., we managed to encounter three within the first couple of hours of gameplay. One acted as a tutorial however, as a busted E.M.M.I. locked in place gives Samus a chance to test out the Omega Cannon, the only weapon strong enough to finally dispatch the creepy enemies, but one with a very finite amount of energy. After having it explained to us, we didn’t encounter the necessary resource for an Omega Cannon until much later, as a reward for tackling a mini-boss. So it seems that you’ll have to earn this energy, to finally claim dominion of the different areas, and dispatch the wandering E.M.M.I. robots once and for all.

You will be itching to dispatch them as well, as beyond their creepy beeps and blank expressionless faces, the E.M.M.I. bring the Dread to Metroid Dread thanks to their tenacious hunting of our heroine, and the many abilities at their disposal. They can easily clamber over almost any platform, so Samus has very few places to hide. Facing one head-on is almost guaranteed death, so in the early moments, you can only hope to run. The opening areas are designed fantastically to accommodate this, as after you get a sense of the area, you start to notice different shafts and nooks where Samus can powerslide to escape, dumping her into an area below out of harm’s way. While you earn new ways to dispatch the aggressive automatons a little later, the early stage design and overwhelming feeling of helplessness at the hands of these deadly robots do a great job of quickly establishing Samus’ physical capabilities, as well as of the direction of both the game design and the tone of the title in general. 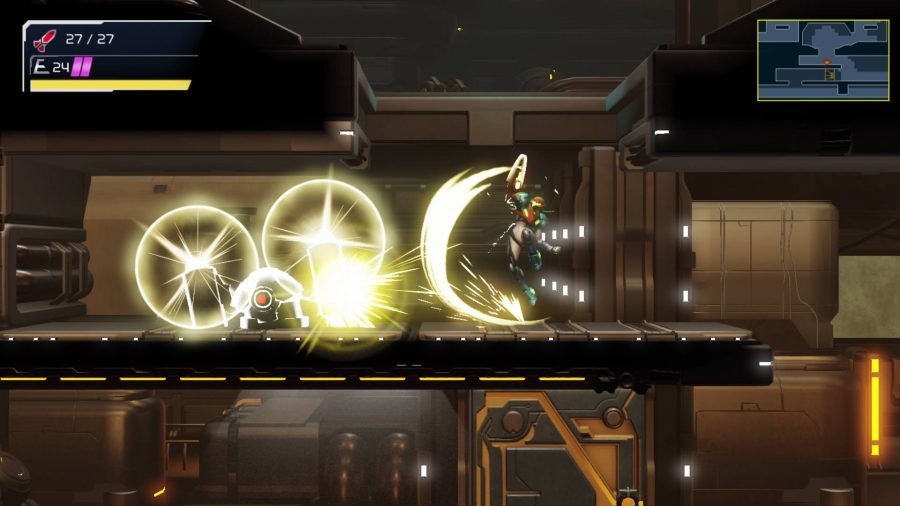 This is still Metroid at its core though, so don’t think this is just Resident Evil 2 with a space-based skin. You still need to refer to your map often, now very handily visible at all times in the top right corner of the screen, and you are encouraged to scour every inch of the world for new additions to your arsenal, as well as more firepower by increasing your missile capacity. Planet ZDR already feels very densely populated, thanks to a rich variety of enemies and environmental hazards. It was very gratifying to not only discover secrets by blasting your typical square-shaped blocks to find hidden paths, but also interacting with the world itself, as you solve water-based puzzles to create new paths, adjust the flow of thermal fuel, and follow the pipes through to new areas. It feels like great effort has been put into making Planet ZDR a living, breathing place, and not simply a maze to be escaped.

Within our two hour preview, we managed to get to the next area of Cataris, a much hotter environment than the initial one, as well as unlock both the Spider Magnet and the Phantom Cloak. The Spider Magnet allows Samus to cling to any blue coloured surface, and instantly changes how you interact with the world. Making Samus more nimble from a very early point in the game feels like a smart way to hand out her powers, instead of instantly unlocking bigger and better guns. Though you do get the Charge Beam early on, this is useless against the E.M.M.I. themselves. Then the Phantom Cloak allows Samus to become somewhat invisible, and avoid detection from the E.M.M.I. while keeping still. It feels obvious from these powers that the point of this game isn’t yet to become a galactic badass and mow down any enemy we face. This world is hostile, the E.M.M.I. are absolutely deadly, and so the best addition to Samus’ moveset are the abilities to better run and hide. 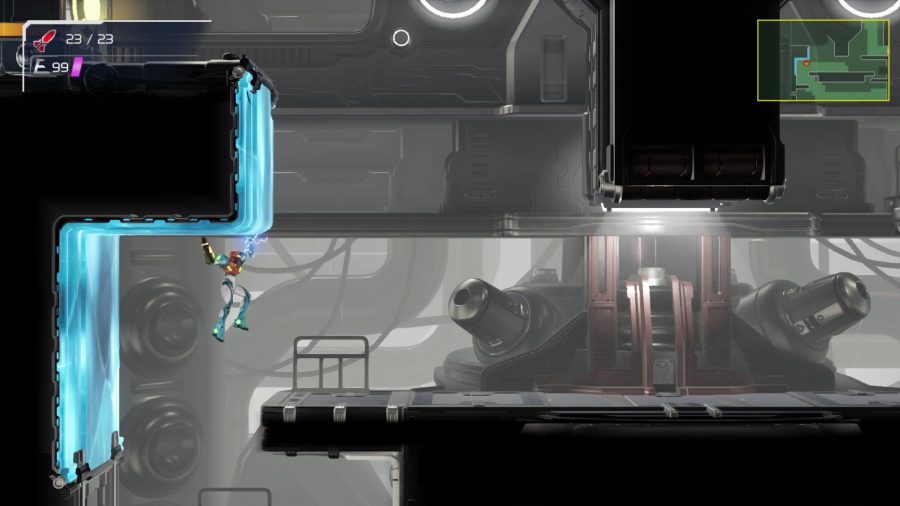 From our brief time, it’s immediately clear that Samus has never felt better to control, and the Metroid formula has been honed over time like a pearl, leaving us a shining example of both the Metroidvania genre and this franchise’s capabilities. Story beats allude to addressing some long unanswered questions, while Samus herself feels like a warrior made stronger by the many adventures of her past. The world of Planet ZDR seems to be one of the most richly populated and beautifully realised for the franchise, while the OLED Switch helps to strengthen the gorgeous visuals, in both action and the environment, making Samus’ latest adventure feel exactly how we imagined it when playing Metroid as children.

We’ll have to wait to get our hands on the game to see if it continues to impress in its world design and smart evolutions of Samus’ power, but if the opening segment is anything to go by, this could be both the incredible big-budget 2D Metroid game fans have been clamouring over for decades, while also being an unmissable Metroidvania title for any fans of the genre. I hope the game continues to make us terrified of every new area up until the very end, and I especially hope to see what interesting new enemies and environments Samus will encounter on her latest mission. Meanwhile, the E.M.M.I. robots add an utterly essential feeling of unease to every footstep on this lonely planet, and could be the secret key to making Metroid Dread a masterpiece.

Metroid Dread releases on October 8, the same day as the Nintendo Switch OLED model. You can check our guide to discover exactly where to order the Switch OLED, and then be sure to check out the best free Nintendo Switch games to save some money after your purchase.