Clash Royale looks like a simple game from the outside. Two players drop units onto the battlefield, and watch as they try to destroy the opponent’s towers. But Clash Royale decks are surprisingly complicated. There may only be eight unit cards in each, but in many ways this actually requires your deck synergy to be more focused and precise. There’s little room for error in good Clash Royale decks.

So what are these magical selections? Well, we decided to put together a list of the best Clash Royale Decks. Whether we’re talking Electro Giant, Royale Delivery, or Golem, we’ve picked our favourite variations based on each of the popular deck archetypes.

Some of these decks focus around bridge spamming, whereas others try to bait enemy units. But whatever strategy they utilise, each one has its own strength, and should serve you well in competitive play. If you enjoy this article, why not check out more of our content? We have plenty of recommendations for other games like Clash Royale in our list of the best mobile card games!

the best decks in clash royale:

Here’s our list of the top Clash Royale decks in the current meta: 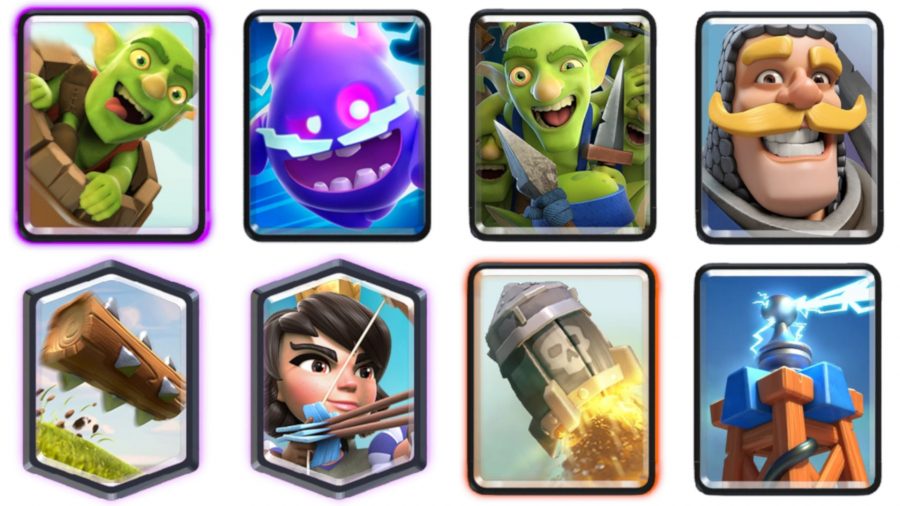 This Clash Royale deck centres around the Electro Spirit, a low hitpoint, low damage unit that sacrifices itself to stun enemies. Our favourite version of this deck follows up by crushing those stunned enemies with The Log. 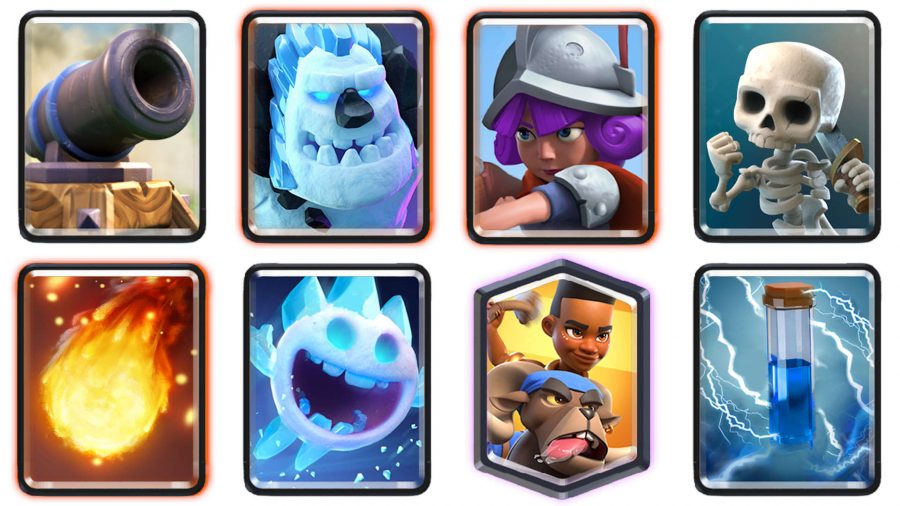 Another good Clash Royale deck, the Ram Rider, focuses around a split-aggro unit where the rider targets enemies and the ram targets buildings. Our favourite version centres around quickly cycling cards so you can deploy more units, more often. 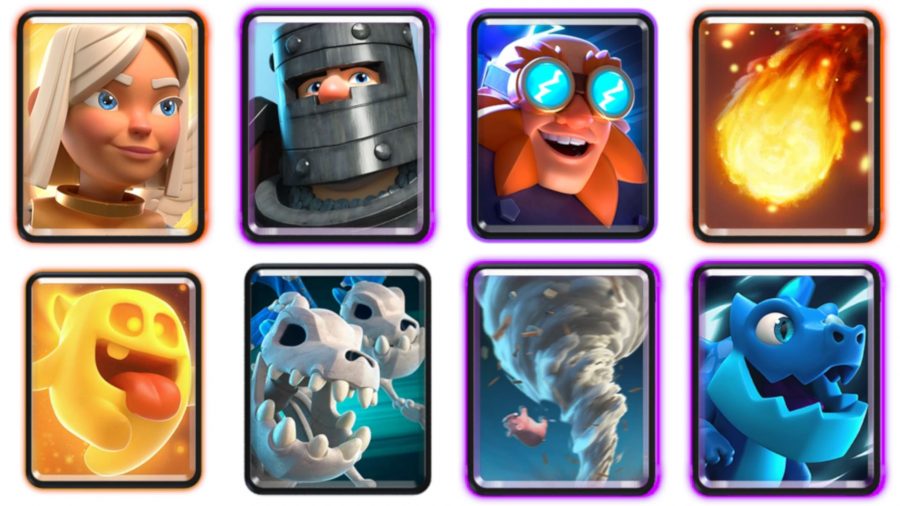 This Clash Royale deck is based around the Electro Giant, a powerful unit that stuns and damages enemies in a radius around him. Our favourite version focuses on keeping the giant healed, using the tornado to make groups of enemies vulnerable to area of effect damage, then punishing it with the giant. 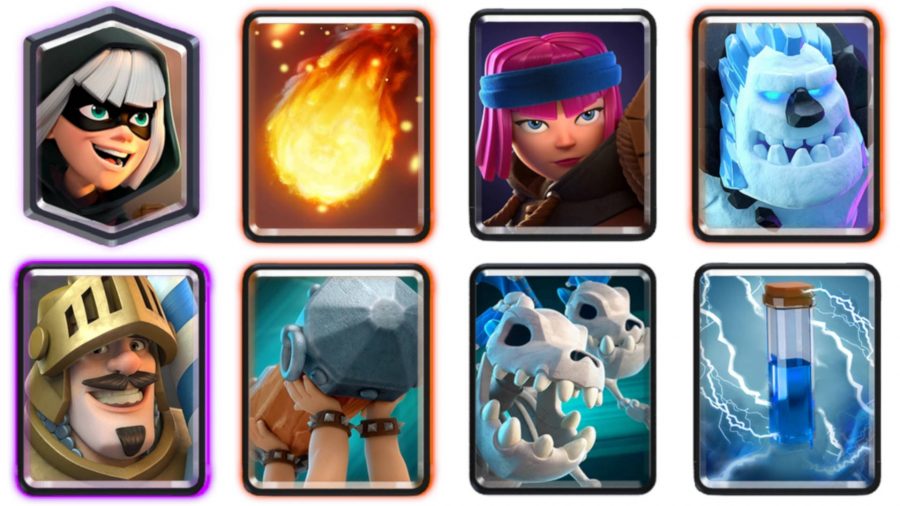 This top Clash Royale deck is all about Skeleton Dragons, a versatile unit with decent damage, low cost, and the ability to fly. Our preferred version maximises the effectiveness of the dragon’s model count by spamming the bridge and trying to funnel your enemies into a damage choke point. 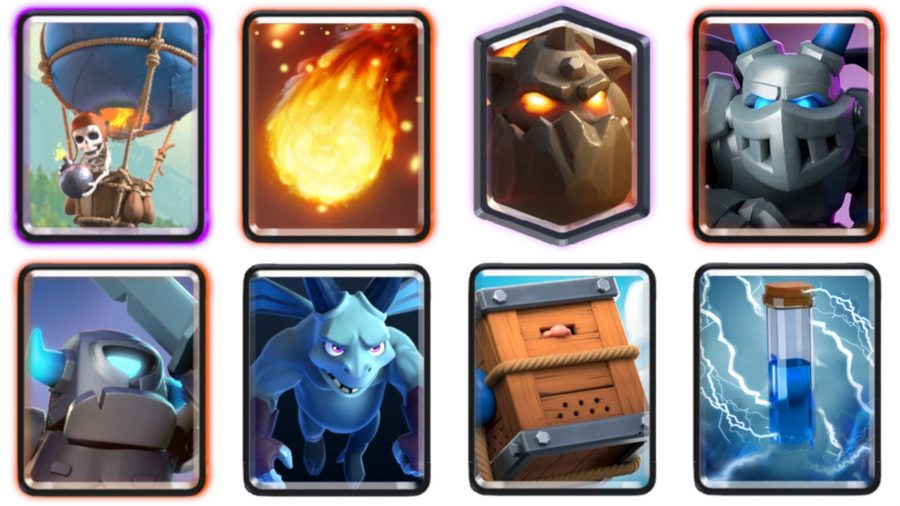 This top Clash Royale deck uses Royal Delivery, a damage and defense spell, to buff your units. Our picked version uses the Royal Delivery to damage air units, and takes advantage of that air superiority with the Balloon and Lava Hound. 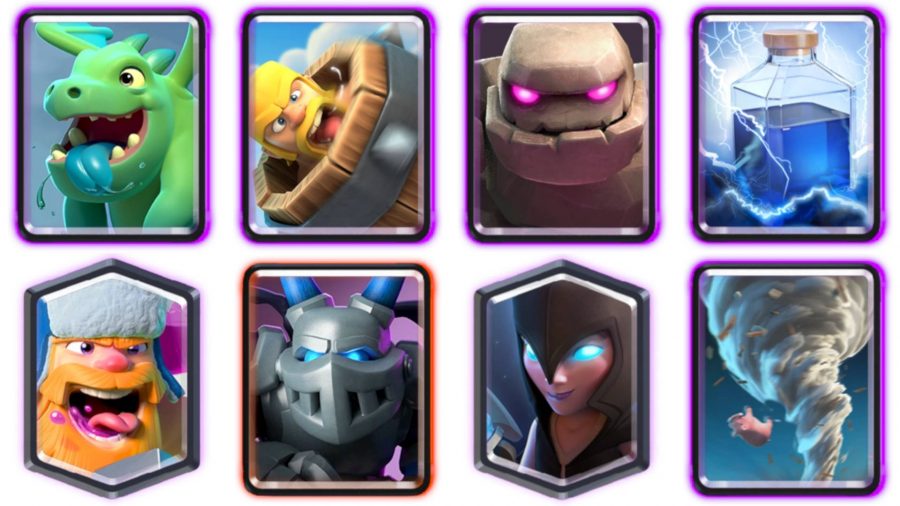 The Golem is a popular unit in Clash Royale for having high hit points and being able to deal decent damage. Here’s a good Golem deck to use in-game: 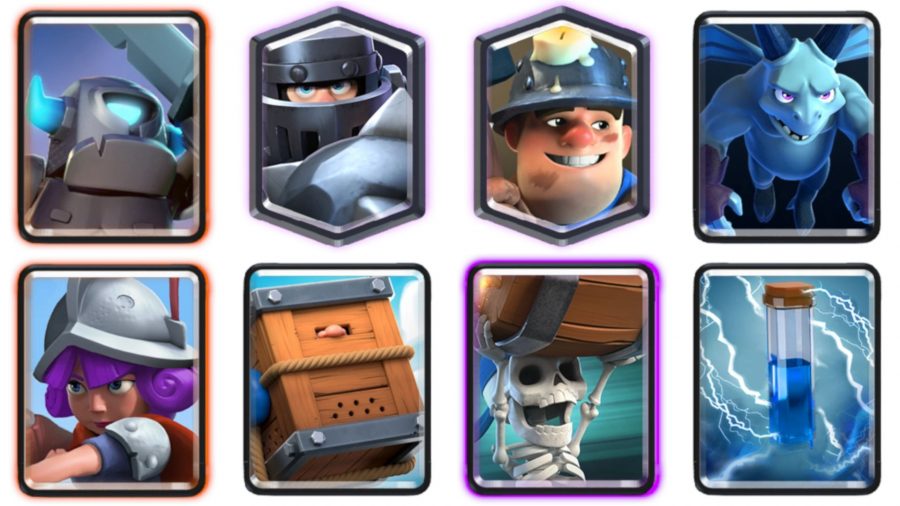 Mega Knight is one of the most popular Clash Royale units, with area damage and very high hit points. As such, there are lots of decks that feature him as a centrepiece. Here’s a great Mega Knight deck to help you get started: 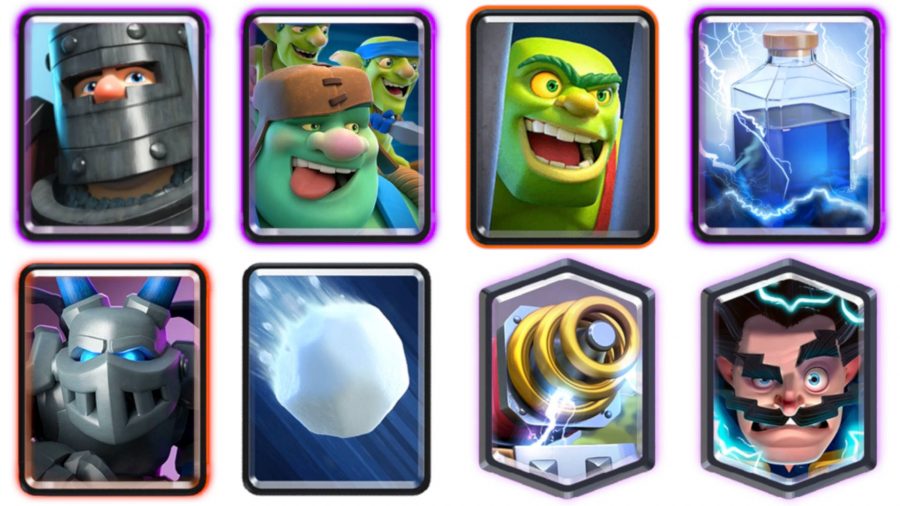 Sparky is an incredibly difficult card to get hold of – so this deck might not be for you, free-to-play players. However, if you’ve got cash to burn, then this could be a lethal combination. 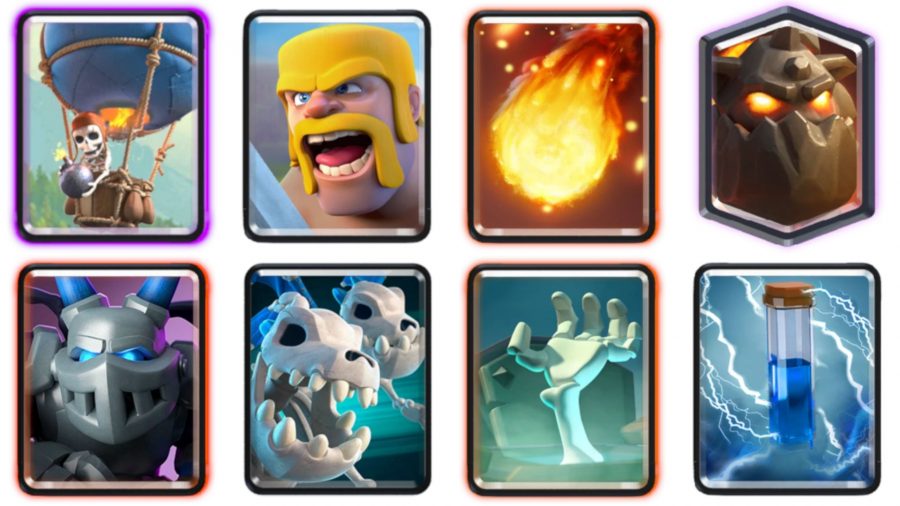 This deck involves a Balloon, and then plenty of fiery cards. Lava Hound and Fireball deal big damage, and then you’ve got your Balloon in your back pocket to take your opponent by surprise. 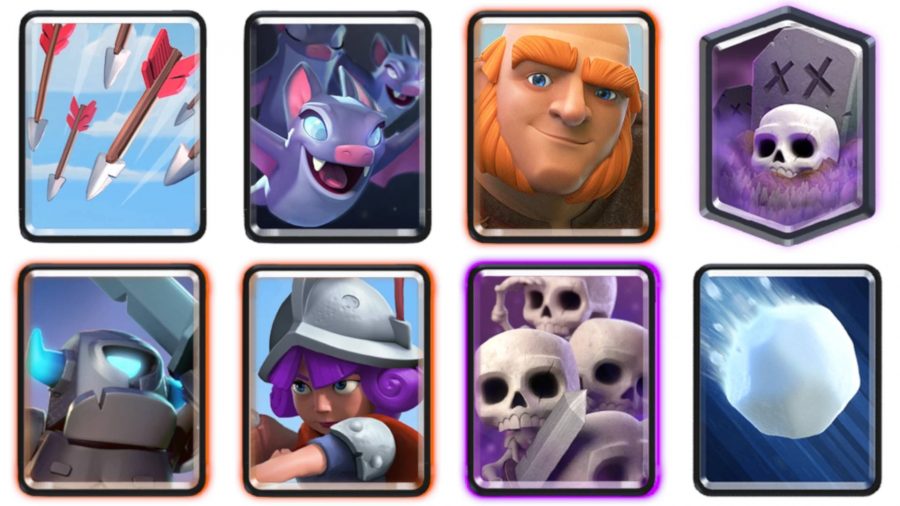 This deck has great synergy between the Graveyard and Skeleton Army, but the most important card is, of course, the Giant. This gentle-looking fella is perfect for rushing an enemy and dealing a big chunk of damage. Just be careful, as this deck lacks any really powerful defensive buildings. 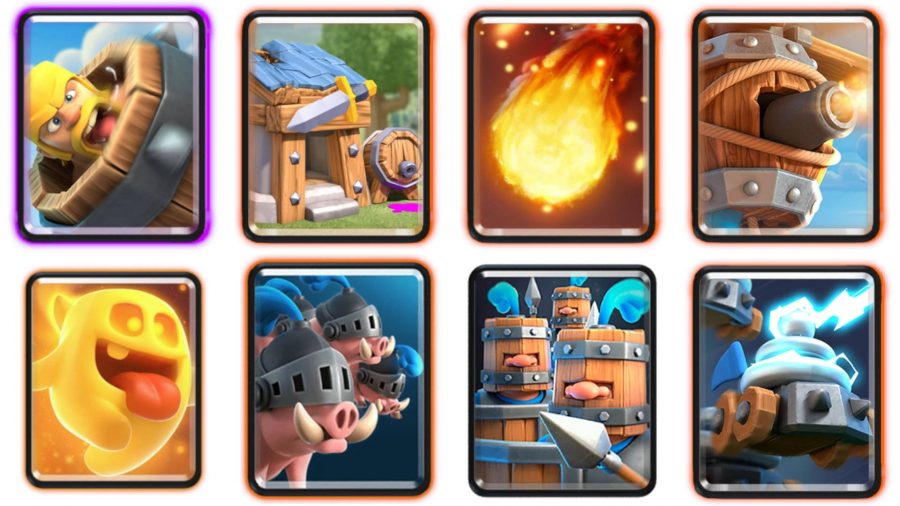 Meta deck of the week for Clash Royale: Royal Hogs

This section of our Clash Royale decks guide is dedicated to showcasing something meta-relevant, that people are using to great effect right now. We’ll keep this updated weekly with what’s hot so you can keep up to speed with what to build – or how to counter it.

Now we just had to include a Royal Hogs deck – they’re pigs with helmets! We’ve had a lot of fun with this deck, and it’s a great option for free-to-play players. You’ll rely on the eponymous porkers for most of your damage, but watch out for opposing flying attackers, as you lack any real anti-air defence.

Building decks for yourself to try out different combinations is super useful when it comes to deciding what to bring to battle. If you’re looking for a useful tool for online deck-building, deckshop.pro has a great one, along with a full card list.

And that’s our list of the best Clash Royale decks. If you want to play the game for yourself, you can download Clash Royale on Google Play and the App Store.