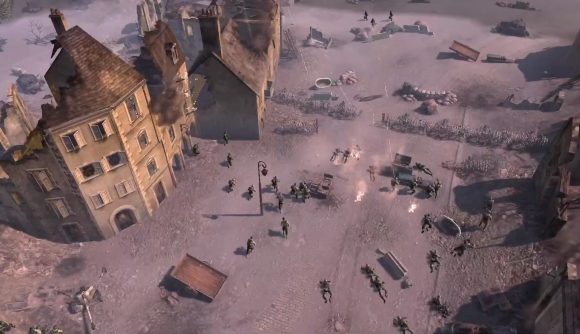 “Company of Heroes offers players an epic WWII campaign, with gameplay comprised of intense squad-based battles that progress from the D-Day landings through to the liberation of Normandy. Designed for phones, this version of the game allows mobile gamers to direct all the action from a user interface highly tailored to touch controls.”

The original Company of Heroes launched almost 14 years ago to this day, so bringing the game to mobile was no mean feat. We were pretty impressed by some of the new control improvements featured in this version, and they add a surprising number amount of versatility to how you play the game. Either way, this port feels long overdue, and is especially exciting for Android users – like me – who are finally able to experience the much beloved RTS on mobile.

Feral has also released a gameplay trailer with some footage, and voice-over about the in-game improvements:

Company of Heroes is, of course, a premium game, and will set you back $13.99 (£13.99). The game itself is available to buy and play today on Google Play and the App Store. The iPhone version is also free for anyone who bought the game on iPad earlier this year.

For more similar recommendations, it’s worth having a browse at our lists of the best mobile strategy games, and the best mobile war games – Company of Heroes is on both of them!