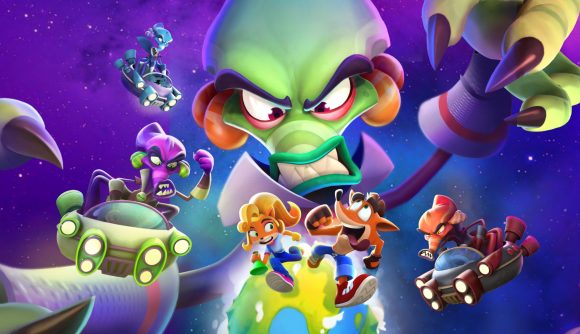 Start your engines as Crash Bandicoot: On the Run’s latest season, Survival of the Fastest, introduces fan-favourite adversary Nitros Oxide. If you’re a longtime fan of the marsupial’s antics, you may recognise the alien racer, who first appeared in 1999’s Crash Team Racing and has appeared in nine games since.

Of course, Nitros Oxide isn’t alone, though not because he has friends. Instead, he’s brought all versions of himself from across the multiverse, as well as new minions for Crash and Coco to defeat. As with any Crash Bandicoot: On the Run season, there are new lands to explore, three of which are overrun by the racer, who has taken inspiration from his home planet, Gasmoxia..

There’s also a new Bandicoot Pass filled to the brim with exclusive rewards, such as new skins for Crash and Coco. In addition, if you have a competitive streak, you can compete on the seasonal leaderboard, and show all other bandicoots who’s boss.

The new season kicks off today, so dive back in to grab rewards and defeat an old adversary, again.

For the most part, we had positive things to say about the mobile runner. In our Crash Bandicoot: On the Run review, we found that it “provides enough to keep you coming back daily, but it’s definitely missing a few ingredients.” The game is available for iOS and Android devices.

If watching Crash run gets tiring, go and check out our lists of the best Android games and the best iOS games – who knows what you might find.