With the massive popularity of Among Us, games about being stalked by killers have really returned to the limelight. But survival horror is a genre with a long history, stretching back to Slender Man, Dead by Daylight, and more recently, Alien Isolation. Well, it seems even YouTubers are getting in on the action, as FGTeeV (the Family Gaming Team) has developed its own game in partnership with BDT Digital, called FGTeeV Goozy.

In Goozy, you have to solve puzzles and complete tasks while being stalked by a deadly slime monster. It’s surprisingly hard, though, so we’ve created an FGTeeV Goozy guide, explaining the best ways to outwit Goozy – the monster – and solve the puzzles contained within the house.

If you found this guide useful, be sure to check out some of our other content. For more mysteries to uncover, we have a list of the best mobile puzzle games. Or if you’re generally looking for great recommendations for the platform, be sure to see our list of the best Android games.

everything in our fgteev goozy guide:

You can download the mystery hide and seek game from Google Play or the App Store.

How do i get FGTeeV Goozy on PC?

You can play FGTeev Goozy on the big screen via MemuPlay.

APKs have plenty of benefits, including letting you update your games manually. You can find the FGTeeV Goozy APK on APKPure.

Where can I watch the FGTEEV Goozy trailer?

The trailer shows off FGTeeV Goozy’s gameplay, and some of the tools you use in-game. 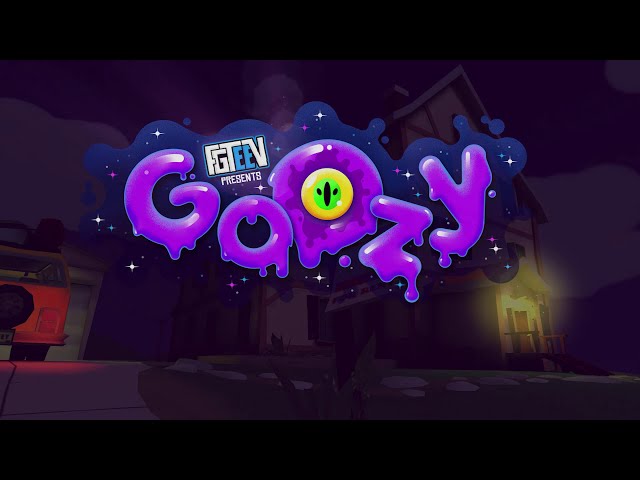 how do i play fgteev goozy?

As each game starts, you wake up inside a mysterious house. After searching the nearby drawers you find a slime vacuum module for your multi-tool, which lets you hoover up the slime on the door and escape the room. The rest of FGTeeV Goozy follows a similar pattern, as you search the house for modules to add to your multi-tool, allowing you to unlock new areas and solve puzzles.

As you’re doing this, Goozy, the slime monster, constantly hunts throughout the house, and chases you if he spots you. The only way to avoid this is to hide in cupboards. But Goozy grows extra limbs and becomes faster as you solve puzzles in the house, meaning the more progress you make, the more difficult the game is. It’s basically like Alien Isolation or Among Us, as you try to complete ‘tasks’ while being stalked by a killer. You also only have three lives per run of the game.

is goozy made by the family gaming team?

While FGTeeV Goozy isn’t actually made by the popular YouTubers, it is developed in partnership with them, and you can even find slime versions of the family in the game, and collect them using your slime vacuum. You can also watch the family playing the game on the FGTeeV channel: 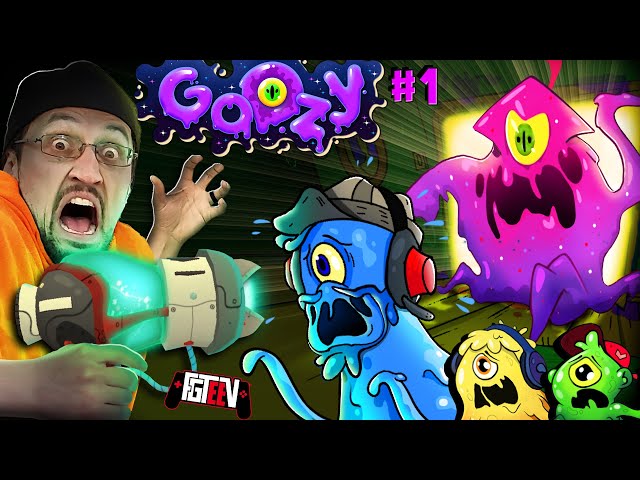 For a relatively simple game, Goozy can be surprisingly hard, so here are some tips to help you through.

Firstly, search everything, as this is where you find the modules you need to progress, but also you can find coins with which to purchase buffs for your next playthrough. Some of these, such as the map, are super useful, as with the exception of a few key points, the house changes every time you start again. Similarly, make sure to vacuum all of the purple slime you find, as this hides modules and family members. 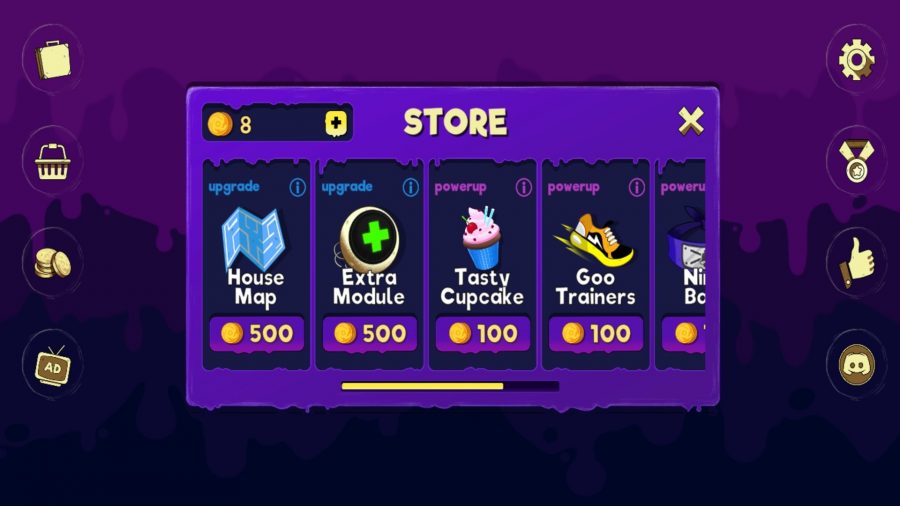 Secondly, be methodical. It’s easy to get lost in the house, and forget which rooms you’ve been in, and running around trying to find your bearings is only likely to attract the attention of Goozy. As you methodically search, pinpoint key locations to return to, such as the breaker box, the button code box, the boarded up doors, and the location of blue slime, as they are useful once you find the right modules, such as the wire cutter, or the module which lets you read secret messages in blue slime. 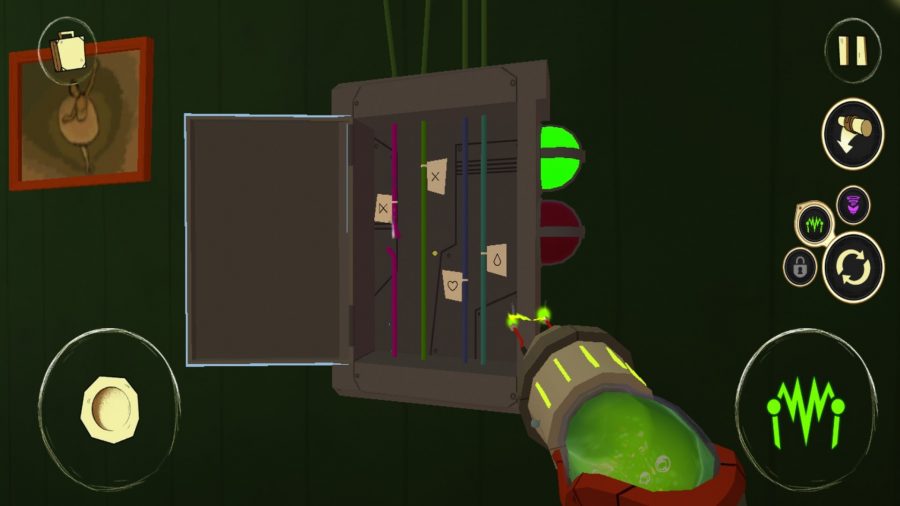 Thirdly, don’t panic if you see Goozy, especially if he’s in his early stages. Goozy is actually pretty slow early on, and you can easily outrun him until you find a cupboard to hide in. Once the purple light effect disappears from the edges of the screen, you are safe to come out again. 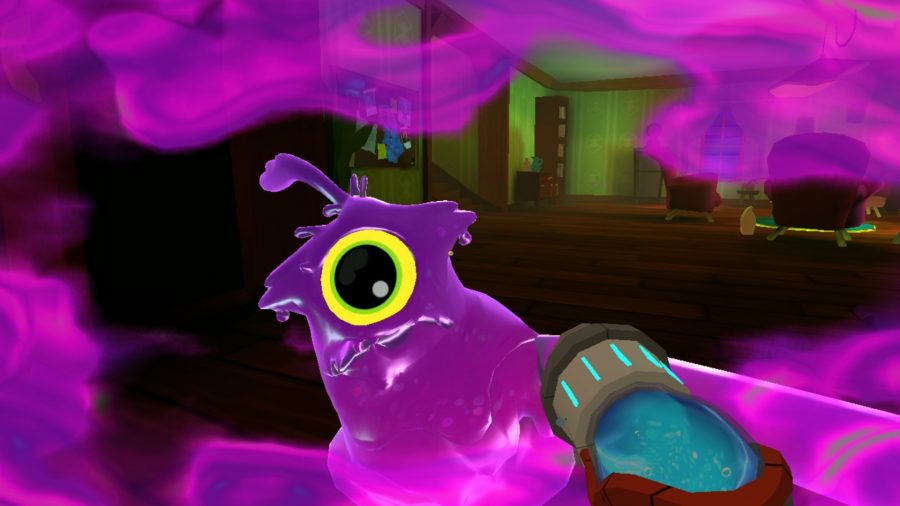 And finally, use the board. There’s a reason it’s the loading screen, and the first thing your character sees when walking into the room. The board is basically the game’s tutorial, and gives vital clues to help you find the key, and get to the basement lab.

And that’s everything in our FGTeeV Goozy guide! We hope it helps you survive… at least for a little while. For some more game recommendations, see our list of the best iOS games.