Football management games are a bit like former Stoke, West Brom, and Middlesbrough coach Tony Pulis. They tend to stick with what they know best and steadfastly refuse to change with the times. Initially, playing it safe can steady a sinking ship and keep the fans happy but eventually, the supporters will be yearning for something a little more innovative and exciting.

Saying goodbye to Tony may mean that your team are no longer guaranteed the security of a reliable finish outside of the bottom three (Tony has never suffered the indignity of relegation) but at least there is the possibility of witnessing something much more entertaining on the pitch.

As the title suggests, Football Drama shifts the focus of football management away from player databases and financial spreadsheets and towards the personal struggles of characters in a footie soap opera.

You step into the expensive Italian shoes of Rocco Galliano, a pipe-smoking sophisticate with a smart line in Eric Cantona-inspired pseudo-philosophical babble. It may have been seven years since Rocco last took up the managerial mantle, but Boris Aluminovitch, the billionaire owner of struggling Calchester Assembled FC, is desperate for a change of fortune and willing to give Rocco a final shot at the big time. (Fancy yourself a bit of an armchair manager? Check out our list of the best mobile sports manager games).

When he isn’t yelling orders from the touchline or schmoozing with the Club Director’s wife, Rocco likes nothing better than to sharpen his intellect by engaging in debate about the human (and feline) condition with his pet cat. Yes, Football Drama is a football game, the likes of which you will not have seen before. 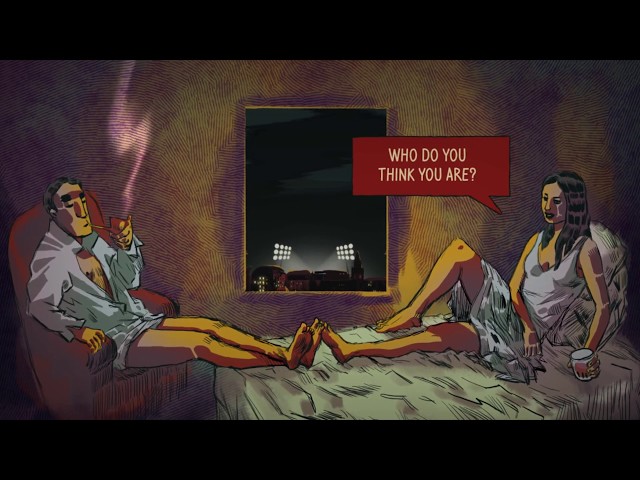 Calchester Assembled FC may sound like a struggling Sunday league team, but they are part of the elite ten-team Thiefa League. A typical week at Calchester plays out in pretty much the same way as an episode from the aforementioned soccer soap opera.

There are no opportunities to spend your time dabbling in the transfer market or juggling your squad, instead, you spend your time either pacing the touchline or struggling with your personal life through interactive narrative episodes. Sometimes surreal, sometimes satirical, these episodes will have you attempting to keep the press and owner on side whilst also making decisions about corruption, illegal substances, and romance.

Don’t get too caught up with your personal life because there are still plenty of football matters to attend to. The first of these is to devise a weekly training programme. Instead of the more orthodox training methods on offer, you may want your squad to indulge in a bit of yoga or instruct them to go out and drink beer. 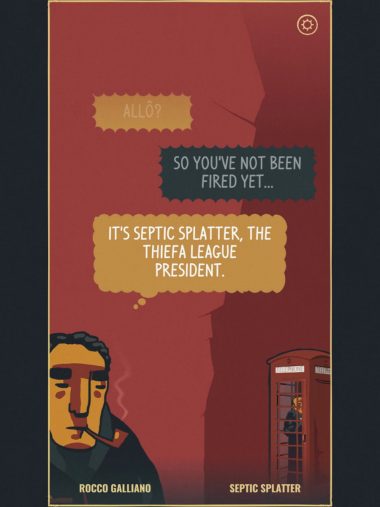 You go into each match with a hand of up to five cards, which act as additional instructions that you can bark out during a match. These will not always trigger successfully but they can give you a significant advantage, allowing the team to concentrate on a particular formation or style of play.

(Psst, fans of deckbuilders should check out our list of the best mobile card games.)

The matches take the form of a series of simple choices between two options. This may be a choice between holding your ground and controlling the play or attempting a risky long pass. Or, you may have to select between marking your opposition or committing yourself to the tackle. The second option tends to put your players under more strain, forcing you to carefully manage your team’s energy levels. After the match, you can offer a handshake to the opposing manager and attend a press conference, before finally justifying your team’s performance.

Presentation is of premier league quality, with artist Daniele Giardini putting in a man of the match performance. The cards are especially eye-catching with their humorous and surreal illustrations. The striking caricatures are also excellent and will be recognisable to anyone with an interest in the game.

Even the matches themselves, which are displayed from a simple overhead perspective, have a number of charming touches, such as the way that the stands throb with excitement as the action heats up, with walls of sound and disparaging chants aplenty. 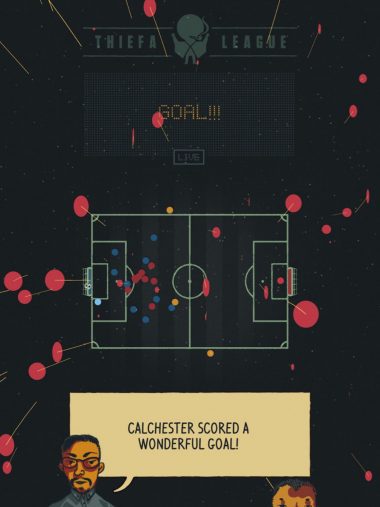 Free from the shackles of official licences, silly team names with their respective quirky team badges abound. Common sense may suggest that the hotel lobby piano jazz that languidly accompanies the game should not really work, but it just adds to the game’s off-the-wall atmosphere.

What stops Football Drama from sticking it in the back of the net is the lack of meaningful interaction. Since you have no control over team selection, tactical decision-making revolves around on-field options. Granted, there are loads of stats that your choices must influence, but the outcome remains a mystery. Even when I strung together a series of good results it didn’t feel satisfying as I never felt sure how I had achieved my success. Like a striker after a power failure, you will end up feeling like you are left shooting in the dark.

The sluggish commentary doesn’t help matters. You will soon be waiting impatiently for the verbose double act to get a move on. Their slow-moving chatter quickly becomes very repetitive, causing the matches to drag. It isn’t helped by the fact that the simple two-choice decisions are not engaging enough to justify the match length.

Can the narrative sections save the day? Well, initial impressions are promising, the developers are trying something different and the story draws you in. Maybe I just made some bad decisions, but my narrative entered a mid-season lull which didn’t perk up again until the end of the season. 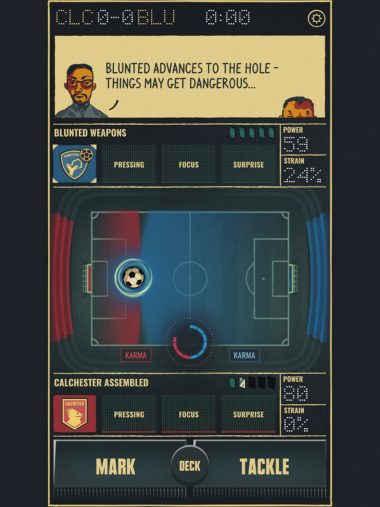 The press conferences and meetings also fail to maintain interest, with the same options coming up time and time again. Football Drama is a brave effort, but it needs some extra content and variety. As its stands I found myself losing interest before the end of the first long season.

Easy on the eye and showing lots of promise, but a lack of quality in the final third means that Football Drama falls short of greatness.