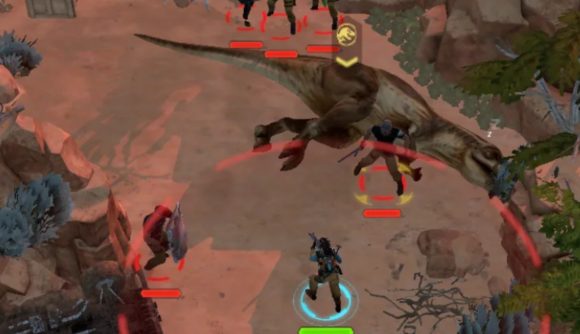 It’s time to walk with dinosaurs once more, as Behaviour Interactive, Universal Games, and Digital Platforms team up for Jurassic World Primal Ops, a new action-adventure mobile game that asks you to collect your favourite beasts, and even fight alongside them to defeat your enemies and protect these impressive creatures.

For the time being, we don’t have a Jurassic World Primal Ops release date, but that doesn’t mean you shouldn’t be excited about this upcoming title, as it’s full of content, including a range of missions, all of which involve rescuing dinosaurs. You see, much like they did millions of years ago, these giant reptiles once again walk the earth, and while most embrace this change, others see it as an opportunity to make a quick buck.

Yes, poachers. But not just these despicable humans. Others want to take these beautiful yet deadly animals and put them in labs, but we won’t let that happen. You and your trusty friends, both man and beast, team up to put a stop to this awful behaviour.

As the name implies, the game is set in the Jurassic World universe, and what better time to announce this mobile title than shortly before the release of Jurassic World Dominion on June 10 – perhaps keep an eye on our sister site, The Digital Fix, as they’re bound to share their thoughts on the movie.

There’s no set Jurassic World Primal Ops release date. However, it’s coming to iOS and Android devices ‘soon’. If you want to get ahead of the game, head to this website to pre-register for the title.

If you need something to keep you busy while you wait for the Jurassic World Primal Ops launch, you can find some great suggestions in our best iPhone games and best Android games lists.