Knights of the Old Republic 2: The Sith Lords has just landed on mobile. It’s the sequel to one of the finest Star Wars games ever released, and while it doesn’t quite live up to the greatness of the original KOTOR, it’s still a massive, engaging, and engrossing RPG set in a galaxy far, far away that lets you become a Jedi or a Sith.

And of course, one of the most important parts of your journey to becoming a warrior of the light side or dark side of the force is getting your Kotor 2 lightsaber. In Kotor 2, you need to build your own lightsaber from three different components and a focusing crystal.

Some of the pieces you need you’ll get for completing quests, others you’ll find scattered around the game world or from specific merchants. Which is where this Star Wars: Knights of the Old Republic 2 lightsaber guide comes in. We’ve broken down the steps you need to take to get your first lightsaber as quickly as possible, and stuck in some tips on how to improve it once you’ve made it. So read on, and in no time at all you’ll feel as cool as Kylo Ren or Rey.

Like we’ve already said, it’s going to take you a while to get everything you need to build your lightsaber. To start with, follow the main quest line. You’ll get your first lightsaber component at the end of the quest line on Talos. Depending on who you choose to help, you’ll get it from the Ithorians or Czerka after you’ve helped them deal with the Exchange.

Worth a purchase? Check out our Star Wars: Knights of the Old Republic 2 mobile review for our full thoughts.

Choosing your next planet

After you’ve finished the first chunk of the main quest, you’ll find there are loads of planets you can visit next. We’d suggest that you head to Nar Shadaa, because it gives you the quickest path to earning the parts you need to build your lightsaber. You can get a component from an NPC called Lootra if you reunite him with his wife. To speed things up even more, kill him the first time you meet him.

You’re going to need to pick a side of the force and stick to it during the first chunk of the game if you want to get your lightsaber as quickly as possible. This speeds up your first encounter with Visas. Make sure you’re 25% dark side or light side, then head back to the Ebon Hawk. That triggers the fight with Visas. Defeat her and you’ll get the third component. 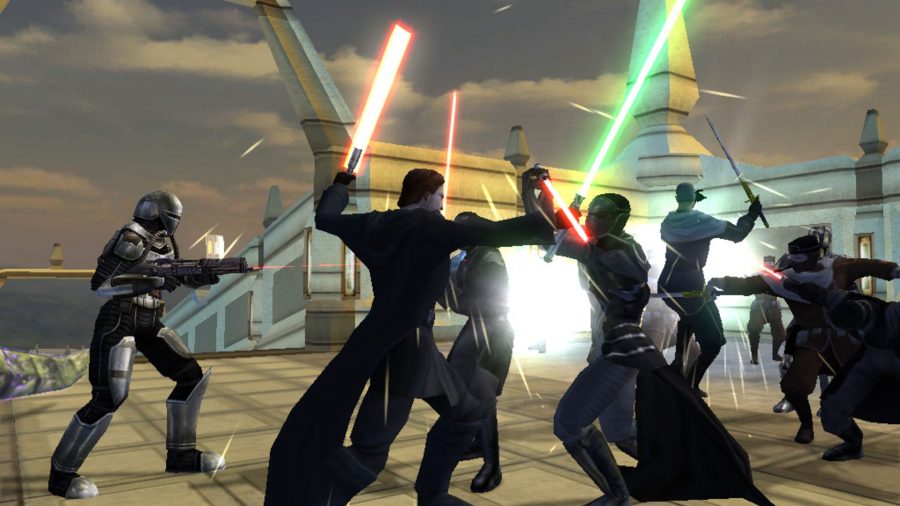 You also need a crystal to make your lightsaber. There are a number of ways to get this. Early in the game the best way is to buy one. You’ll sometimes find them from the unscrupulous brother on Telos, the arms and equipment dealers in the Nar Shadaa main square, or the salvager on Dantooine.

May the force be with you. Here are the best Kotor 2 builds to help get you started.

All you need to do now is talk to Bao Dur. He’ll help you create the weapon and bish, bash, bosh you’re ready to start slicing up enemies with a cool laser sword. You can find new crystals as you play. And watch out for cells, emitters and lenses, which you can also use to change the stats of your lightsaber.