Having never played League of Legends before, I really had no idea what to expect heading into Legends of Runeterra, but if anything I’m glad I never did. Runeterra is not only a wonderfully fleshed out exploration into the world of League, but a complex deck builder in its own right. Many saw Legends of Runeterra as Riot’s challenge to Hearthstone, and I have to admit that there are things it does better.

In Legends of Runeterra you build a deck using a variety of factions, picking and choosing cards as well as champions to build a cross-faction synergy. In this sense, Runeterra is quite a complex deck builder, but despite the massive number of cards, it’s relatively easy to understand because most of the synergies are based around your champions. It’s the name of the game: these ‘Legends’ of Runeterra are what make this a hero-led deck builder, and gives it such wonderful flavour.

Once you have your deck, you’ll face off against an opponent, with alternating turns of attack and defence, drawing another card every turn. Your goal is to reduce the enemy nexus to zero points, which you can accomplish in a variety of ways, the best being attack. Any attack can be blocked (except Elusive units) but the long and the short of the game is to break through your opponent’s defence via spells, unit abilities, and downright trickery. But what makes Legends of Runeterra most special is its twist on the mana system.

Hearthstone popularised the mana-based system on mobile, where you play cards based on their cost, using a gradually increasing pool of mana. But so often in Hearthstone, mana went to waste, because you didn’t have a cost-appropriate card to play. Legends of Runeterra has found an elegant solution to this problem: instead of excess mana going in the trash, a limited amount goes into your spell pool, recycling the wasted potential into a new resource.

Spell mana is used to cast, you guessed it, spells! Wonderful spells of all different varieties and casting speeds. Your spell mana accumulates up to three, allowing you to cast more potential magic per round without it eating in your base mana pool for playing units. But why would I want magic when I can play a unit, you ask? Well my friend, magic can completely turn the tide in Legends of Runeterra.

You can cast spells can while you’re blocking, or when you’re attacking, allowing you to flip engagements entirely on their heads. At the same time, the opposing player can also cast spells, either denying yours, or adding another effect to the mix. It’s a little like poker, in that you are bluffing what you have, but also raising the stakes with each spell you add. 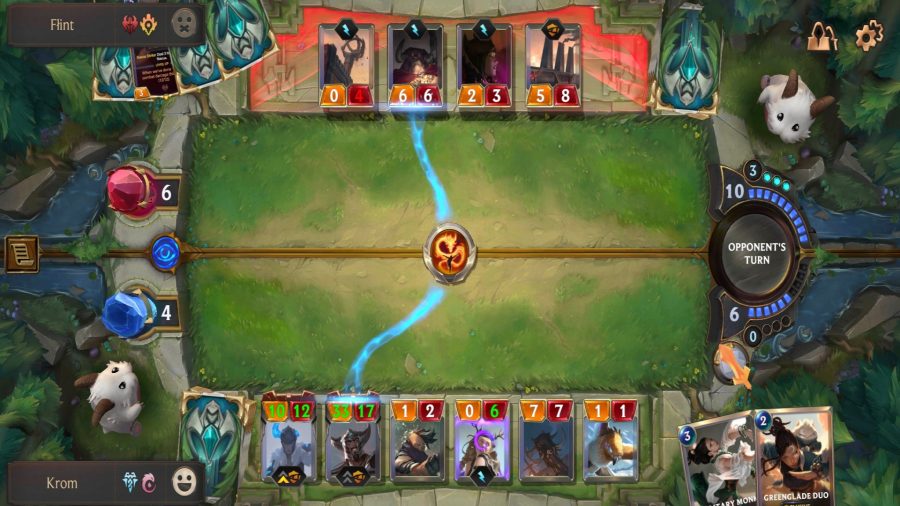 And that’s what Legends of Runeterra totally is: Hearthstone poker. With Runeterra’s attack and defence phases, and the fact you can keep playing units until you run out of mana, raising becomes a huge aspect of the game. Just like poker, most Runeterra matches I’ve played end with a single decisive face-off, where one player bets everything and is either proven right or wrong.

Some of the spell effects and card abilities are absurd in terms of their power. My favourite, the tuskraider, doubles the power and health of every unit in your deck provided you play it on a turn when you’ve damaged the enemy nexus. But every faction in Runeterra has crazy powerful abilities and spells like this. It’s all a consideration of cost. You may play a powerful spell with all of your mana, but if your opponent blocks it with another, cheaper spell, then you’re really in a bad spot. Legends of Runeterra is all about the mutual assurance that everyone is OP, and I kind of love that. 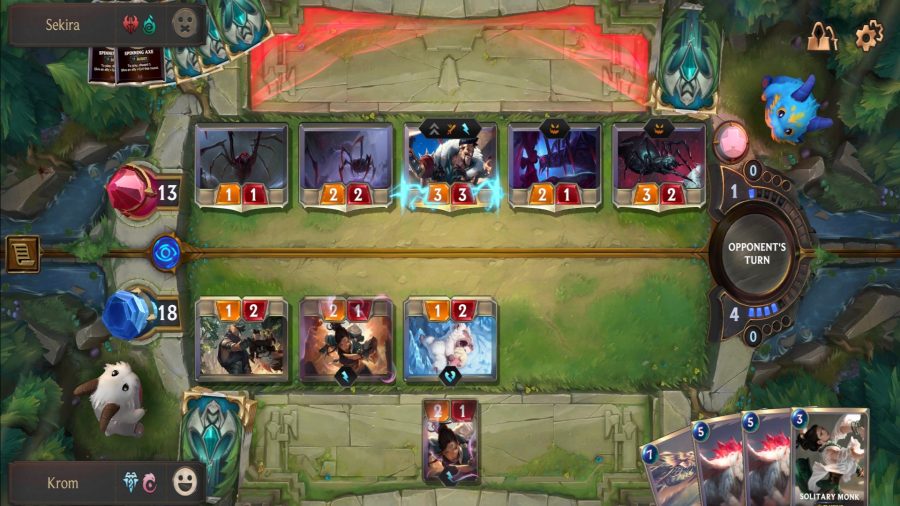 There are some issues with Runeterra though, which somewhat lessen the experience, most of all being that, unfortunately, it’s very grindy. In the 12 hours I’ve played over the last few days, I’ve gained two champions, and haven’t even earned enough in-game currency to purchase a third. There are rewards, but in comparison to, say, Gwent, the experience gaps between them are massive. On top of this you can’t scrap cards for currency, there is only one daily XP mission, and you earn nothing for ranking up competitively. The new weekly reward box can give you quite a lot, but mainly in terms of other cards.

You can, of course, buy champions, and I’m not saying you shouldn’t. But there are 35 champions altogether, and that’s a lot of money for characters that you aren’t able to try before you buy them. I think that the least Legends of Runeterra could do, is adopt some kind of system that lets you try champions properly before you buy them, or even a subscription where you get a few new champions per week. 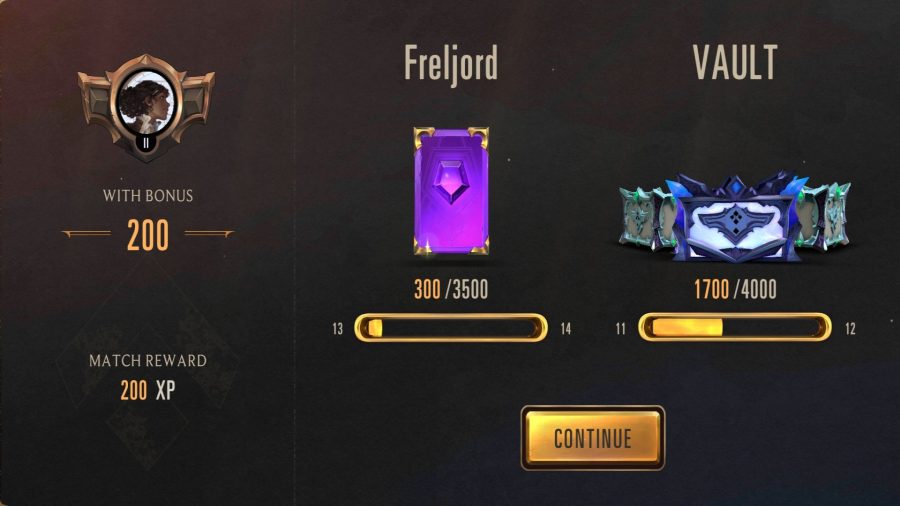 It wouldn’t matter so much in any other deck-builder, but this is ‘Legends’ of Runeterra; the entire concept centres around using champions to create synergies. You do get a set starting crop of champions, but they quickly wear out in terms of their effectiveness. I would honestly rather pay a premium price for this game and get access to all of the champions, and I’m genuinely surprised it isn’t an option.

Legends of Runeterra is a fantastic deck-builder, and I think as a play experience it is probably the best on mobile, whether in terms of production value, concept, variety, or the mind boggling quantity of incredible concept art the game has. But it is also grindy, even for a deck-builder, and champions are hard to get, and that’s not great, because in the end, they are the bedrock this game is built upon.

Legends of Runeterra might be the best deck-builder on mobile, but the grind and hard to access champions, leave it falling just short.