At first, Legends of Runeterra decks can feel like a bit of a mystery. What are these phases for? What do these spells do? When do I cast them to make them work? For some deck building is a chore, trawling through hundreds of cards, trying to work out how they relate to each other, especially when you’d just rather battle. But you can’t take the deck out of the deck builder.

Creating the best Legends of Runeterra decks is all about finding synergy between cards, adding those cards to your stack, and using them appropriately in battle. It can seem a little daunting sometimes, but it is an essential part of the experience. The good news is there’s a deck out there for everyone.

Whether that’s the best budget decks, for those who want little spend and maximum effect, the best beginner decks, for those just starting, or the best decks in general, the recognised cream of the crop, and top of the meta. Let us give you a helping hand with our list of the best Legends of Runeterra decks.

Here are the best Legends of Runeterra decks:

Unless you play loads of Legends of Runeterra, chances are that a few of the phrases we use in this guide won’t make a lot of sense. To help, we’ve put together a bit of a dictionary that explains what each of these terms mean:

our legends of runeterra deck of the week 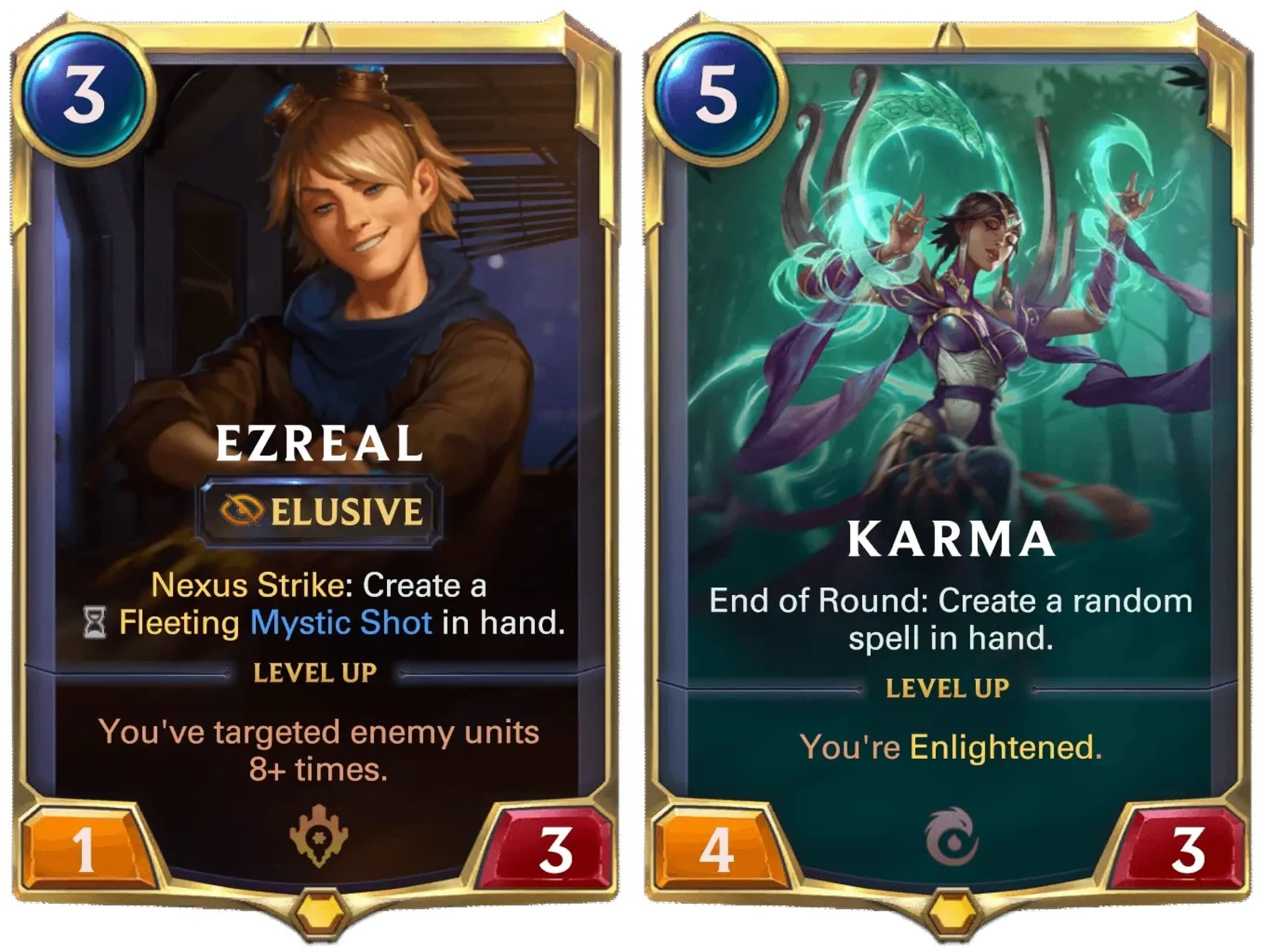 Spells offer a huge amount of versatility in Legends of Runeterra, and Spell Control is very much what you’d imagine; flood your enemy with spells, closing off every strategy they try to put into practice with the range of options available to you.

For this spell-based deck, you’ll want, you guessed it, spells! Karma and Ezreal will give you lots to work with, Shadow Assassins will keep you drawing more, and Eye of the Dragon will give you a new fodder Lifesteal unit every turn you cast at least two. Chump Wump also gives you some melee meat as well as two nexus damage Mushroom Cloud spells. Mystic Shot, Thermogenic Beam, and Statikk Shock offer more versatile damage. Deep Meditation is also a good pick for drawing more spells, reducing cost when you’ve cast two. Fill the rest with units that synergise well with spell casters, and also keep at least one Deny in your back pocket. 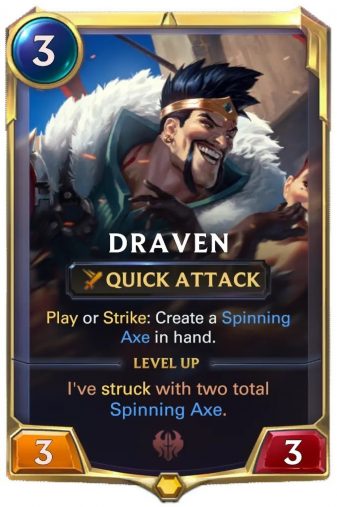 You could describe this as one of many Legends of Runeterra slim decks, as it only includes one champion, Draven. As you might guess from the name, this deck is for those who like to get aggressive from the get-go, prioritising direct damage spells, and units that directly damage the enemy nexus.

The headliner of this deck is the three Draven cards, then you should take advantage of the high aggression and power of the Noxians, especially the Legion cards like the Saboteur, the Rearguard, and the Grenadier, who all either damage the nexus with abilities, or have cheap power relative to their card cost. The Boomcrew Rookie, and the Imperial Demolitionist are also solid picks. Decimate, Mystic Shot, and Get Excited all give you cost effective damage, too. If you have spaces left, focus down the central strategy of power and direct damage.

These decks provide a safe pair of hands for those still learning the game, and are a great place to start. 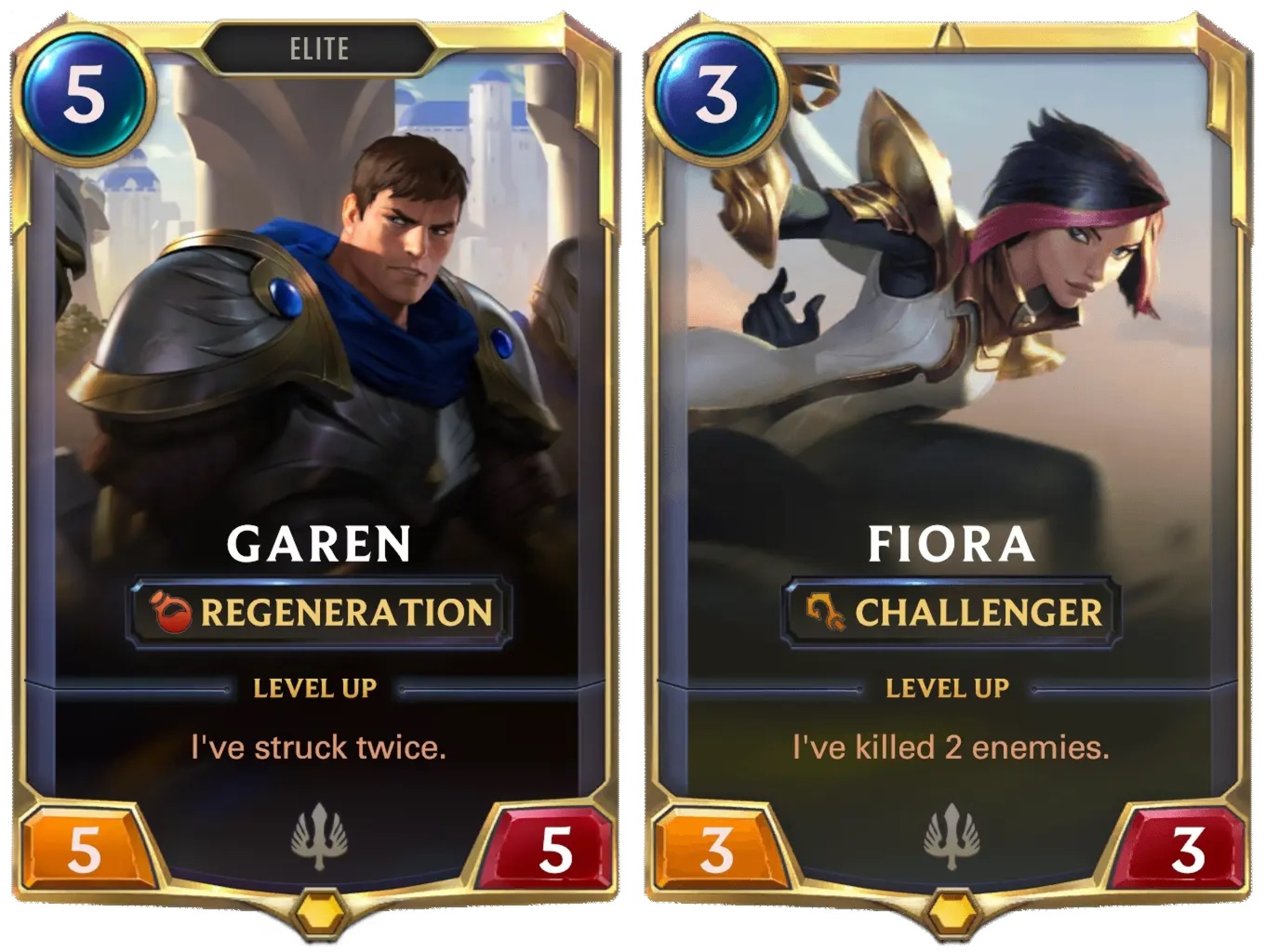 Demacia are very good at buffing units, increasing their power and health on the battlefield. Buffing Bannermen is a fantastic deck that is not only pretty potent, but very simple to use. Neither Garen or Fiora’s abilities have a particularly great synergy, but both are basically about killing things to get strong, which is a lot easier to do when you’re buffed.

This deck is all about buffing with cards like War Chefs, Vanguard Bannerman, Brightsteel Protectors, and Cithria the Bold. Swiftwing Lancers are also quite good, since when they die they grant you another Demacian elite in your hand. If you have spaces to fill out, you generally want cards that buff or have Tough. Your spell focus should also be either buffing, or taking advantage of your unit strength with spells like Single Combat and Judgement. Single Combat is generally a must-have if Fiora’s in your deck. 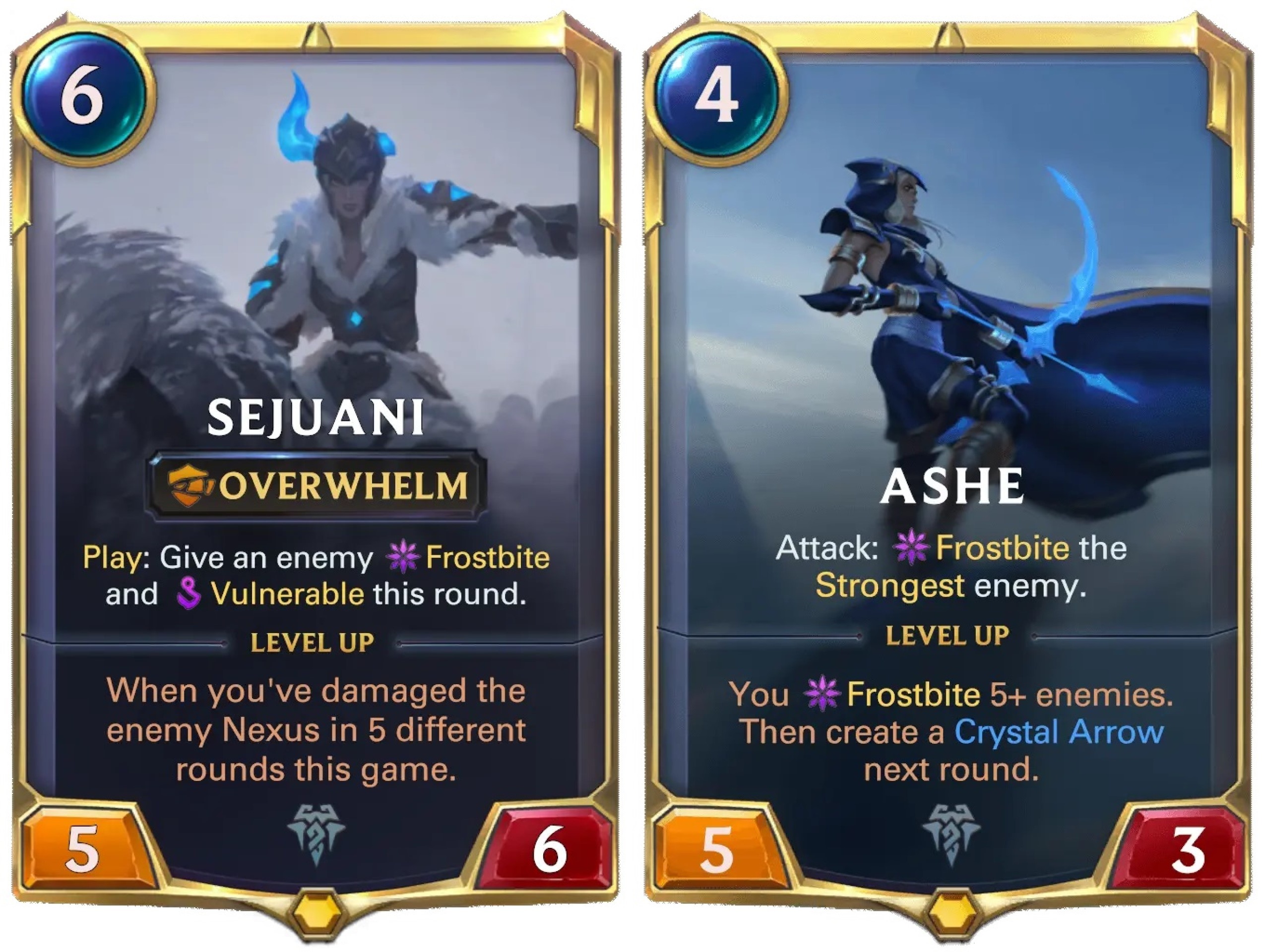 Frostbite is a very strong ability, reducing a targeted enemy’s power to zero for a single turn, and also making them instantly killable to some specific units. Sejuani applying Frostbite to every card, and Ashe preventing units with Frostbite from blocking, basically makes defence impossible for an opponent.

Your focus is on Frostbite to level up Ashe, and nexus damage for Sejuani. Icevale Archers, Rimefang Wolf, and Icy Yeti all allow you to apply Frostbite and take advantage of it. In terms of damage output, you’ll use Noxian cards like Trifarian Gloryseekers, Trifarian Assessors, and Culling Strike. The Tuskraider is also always worth bringing since its ability to double the power and health of every unit in your deck is crazy. Starlit Seers also buff everytime you use Frostbite as a spell.  It can be hard to find answers to a good Frostbite deck.

Only want the best of the best and willing to front the coin for it? These are the decks for you. You’ll absolutely demolish all of your opponents. 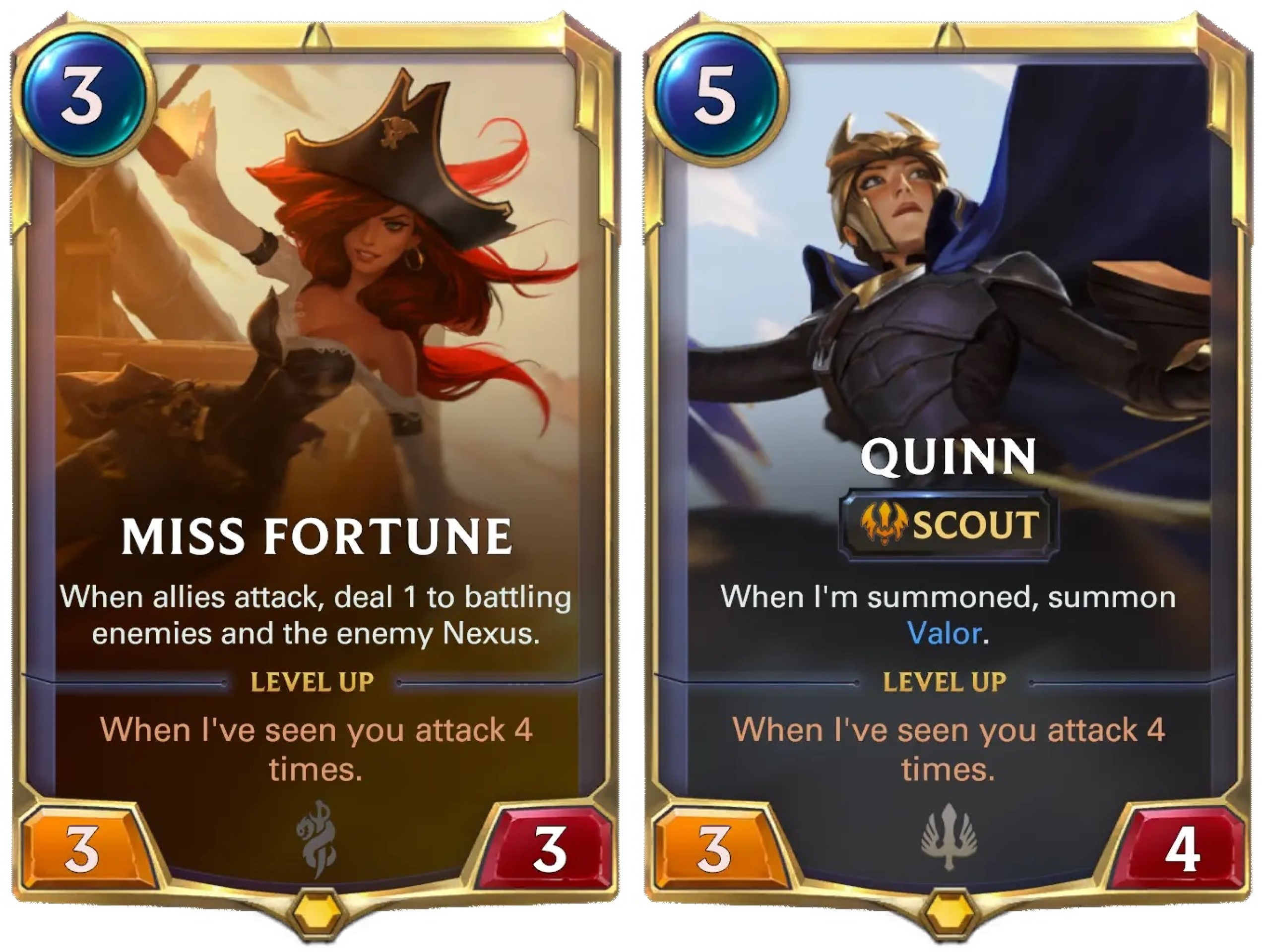 The scout ability lets players attack with scout units only first, which means you can attack twice every turn phase. As you might imagine, this levels up Miss Fortune very quickly, causing her to both damage the enemy nexus, and damage units on the opposing side. The fact that most Demacian scouts also have Challenger, which allows them to lock opponents into a fight, means you can also choose your engagements.

You’ll want three of both Quinn and Miss Fortune to synergise double attacks. Then you’ll want Grizzled Rangers – and some Loyal Badgerbears – for their amazing Last Breath summon effect, some Fleetfeather Trackers for a cheap source of Challenger, War Chefs for their support buff, and Brightsteel Protectors for providing Barrier to your important units. Genevieve Elmheart and Cithria the Bold are also good to both buff your troops and give them Fearsome. The Scout deck effectively focuses around smart and relentless aggression. It also uses buffs, and Challenger, to pick off enemies, and win your chosen engagements. 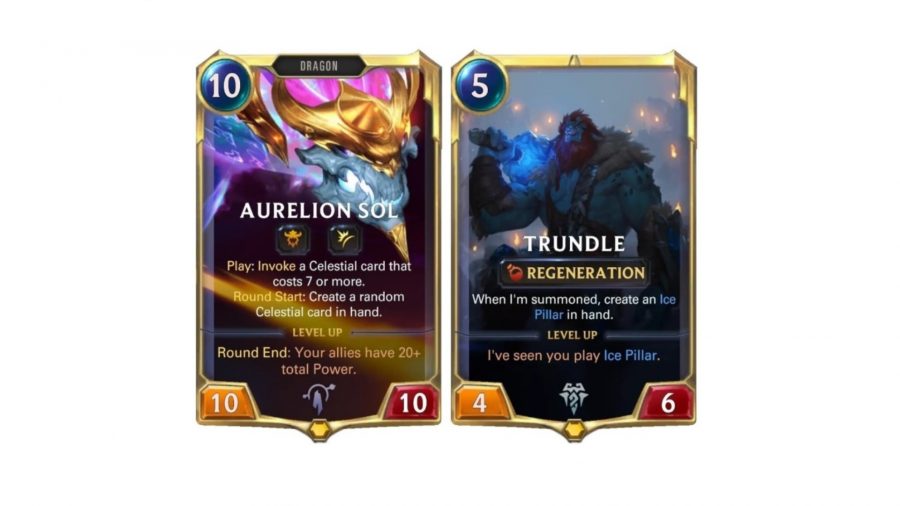 Call of the Mountain brought some powerful cards to the game, and one of the decks to emerge was the Trundle and Sol ramp. This deck centres around gaining lots of mana early on, which then allows you to use Aurelion Sol and Trundle to effectively put the nail in the coffin.

The Sol and Trundle ramp is all about gaining mana with cards like Wyrd Stones and Faces of the Old Ones, while also using cards like Troll Scavengers to benefit from the high cost cards you have in hand. Once you’ve made quick mana gain you can get a lot of units on the field quickly using Trundle and his Ice Pillar, then you can put the nail in the coffin with Aurelion Sol’s Celestials. The Infinite Mindsplitter’s stun also allows you to control the enemy to some extent. If you have to fill out this deck further, we recommend more Troll cards, or cards that synergise with Dragons or Celestials. 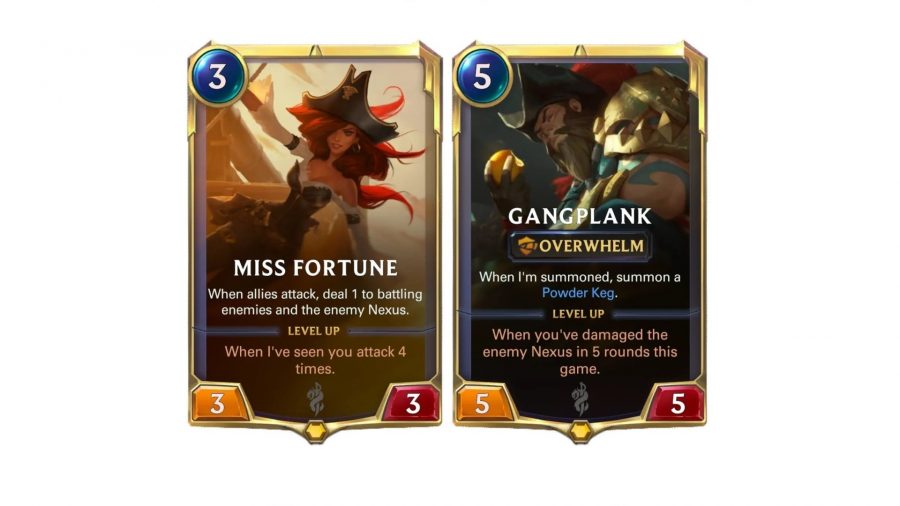 The name says it all really. Using Miss Fortune’s wonderful attack synergy and Gangplank’s Powder Kegs to strengthen those offensives, your opponents don’t stand a chance.

Pirate Aggro is similar to most Noxian aggro decks, with the exception that you’ll be using Powder Kegs and Miss Fortune’s support to strengthen your aggression. Noxian units allow easy Nexus damage, which levels up Gangplank. When you add the strengthening affect of Powder Kegs to that Nexus damage, and Miss Fortune’s support, you can often defeat your opponent before they have time to breath. It’s an aggro rush, plain and simple.

Not interested in spending money and want to make the most of the experience for free? These are the decks for you. 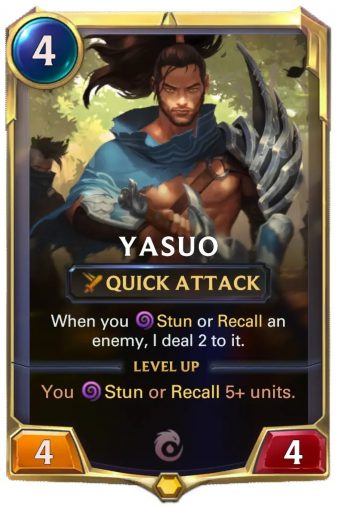 This deck focuses around the inherent synergy between Ionia and Noxus. It also only needs one champion, which makes it cheaper. Yasuo will attack any unit that is Stunned or Recalled, and if you play units that have those abilities, and that buff Yasuo, he can become pretty terrifying.

For this you’ll want three Yasuo cards, three Fae Bladetwirlers, some Shadow Assassins for drawing cards, and Heralds of Spring to imbue Yasuo or Fae with Lifesteal. Your Stun is going to come mainly from Noxus, with Arachnoid Sentry, Minotaur Reckoner, Legion General, and Yone Windchaser. Spells like Ravenous Flock, Intimidating Roar, and Concussive Palm let you apply Stun and take advantage of it. For your Recall you’ll want Will of Ionia, and also Deny, as it lets you cancel enemy magic. If you have any spare spaces, fill them with Elusive, Stun, or Quick Attack units. 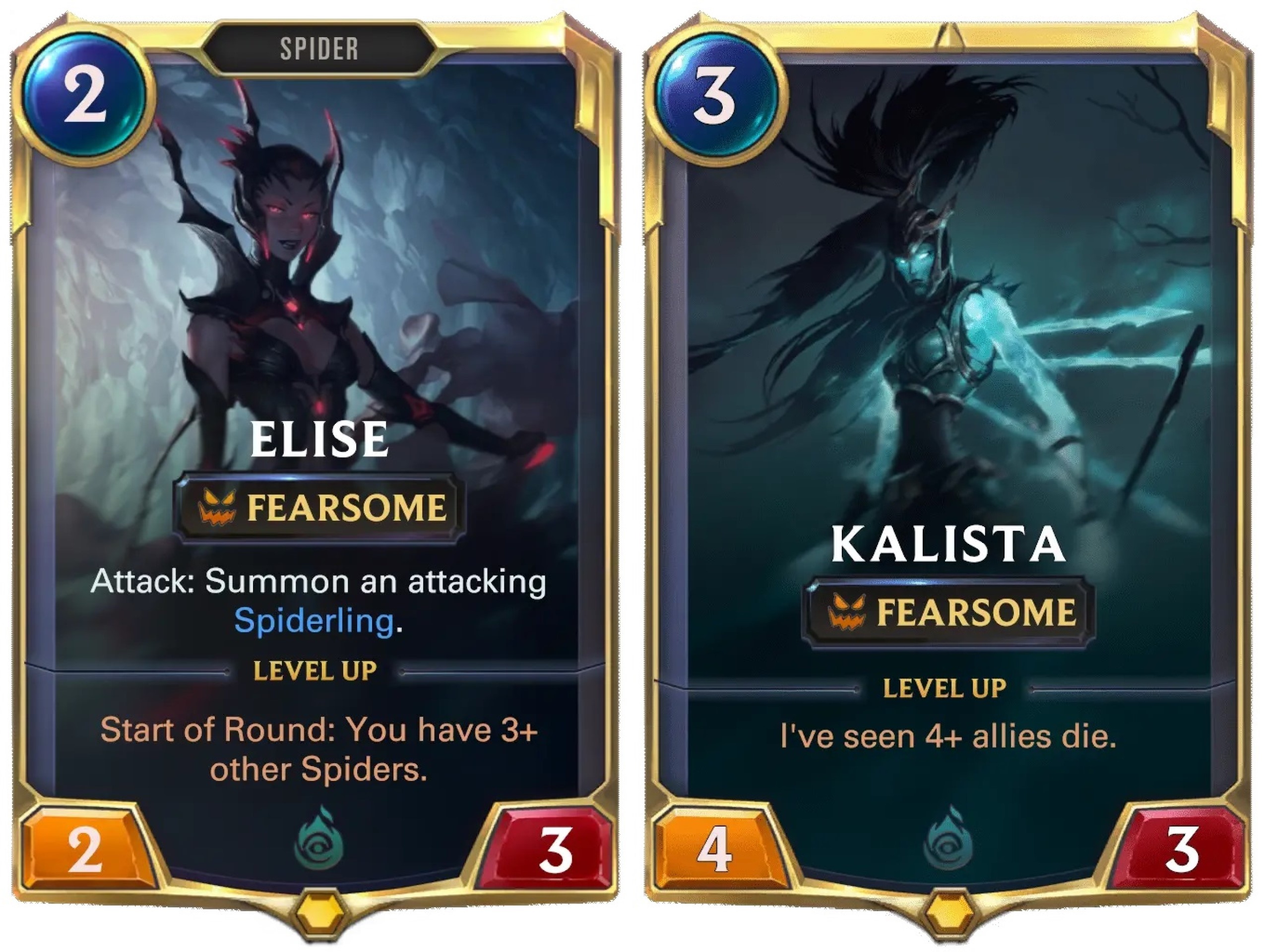 The spiders in Legends of Runeterra are absurdly powerful. While weak at first, they can grow in number faster than any other unit, gain buffs which multiply their power, and give them Fearsome. In the time you’ve played two units, the entire enemy side might be filled with spiders.

You’ll want three Elise, some Hapless Aristocrats, some Arachnoid Hosts to buff, some Arachnoid Sentries for Stun, House Spiders to summon Spiderlings, and Frenzied Skitterers to buff you and de-buff the enemy. In terms of the remainder of your deck, Spiders have a high attrition rate, and so anything that buffs with allied deaths, like Kalista, is a good pick. Brood Awakening, Crawling Sensation, and Vile Feast give you even more spiders. It’s also a good idea to keep Ruination in your back pocket, just in case the enemy gets too strong and you want to wipe the slate clean.