Want to know what the best Monster Hunter Rise Dango loadouts are? Bunny Dango replaces the huge banquet of food that you’re normally served by the canteen in Monster Hunter games. They’re essentially massive mochi balls the size of your face, decorated with different designs that give different buffs.

New flavours are found either by reaching new hunter ranks (both Village and Gathering Hub), or by completing requests or side quests given to you by the NPCs in Kamura Village. Whenever you eat a Dango, there’s a chance that the effect will trigger, giving you a handy buff for your next hunt. It will also boost your health and stamina significantly, so it’s always a good idea to eat before a hunt.

However, since you can have three Dango balls per meal, there’s definitely some combinations that are better than others. Here then is a full list of the Monster Hunter Rise Dango flavours that we’ve unlocked so far, including their percentages to trigger, as well as our recommendations for Dango combinations.

Early on, you won’t have a lot of flavours to choose from. Medicinal is nearly always a good flavour to have, as increased health recovery from items is handy for beginners. Bestnut’s defence boost is also great, particularly against hard-hitting foes, while the Sharp flavour speeds up the sharpening time for your weapon. 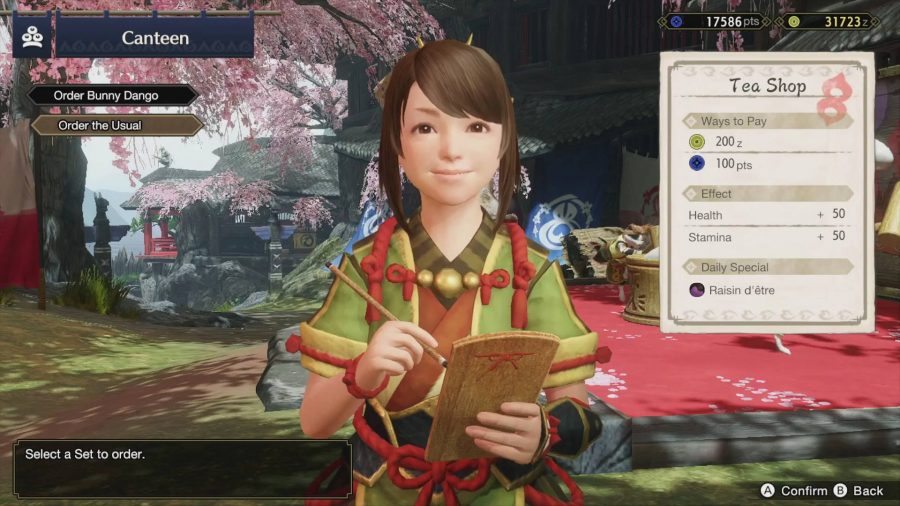 Later on, when you’ve got a few more Dango varieties on the menu, you may wish to tailor your choices based on the monsters you are facing. For example, if you’re going up against a Mizutsune, the Pure Water and later Waterfall Dangos both increase your water resistance by a fair chunk.

Other Dango have their uses for some weapons, but aren’t good for others. So while Fruitflash is very good for those using ranged weapons or gunlance shells, it’s useless to other blade and blunt weapon users. If you’re using a weapon that relies on stamina management, both the Pinea-full and Invigorating Dangos can help with this significantly.

Finally, there are a few that are just good to have. Dressage makes it so that you can mount a monster for a longer period of time, while Blastslash automatically upgrades your Large Barrel Bombs to Mega Barrel Bombs, and speeds up your weapon sharpening time.

You can set a favourite list of Dango by using the ‘Order the Usual’ menu. Just choose a slot, set your three Dangos, and you’re all set. Some Dango, like the first slot of the Grandiose Flavours, will change after every hunt, so make sure you have a look to see what’s on the menu before committing. If you want to ensure the effect of the Dango you eat triggers, then use a Dango Ticket to give every one of them a 100% chance of triggering. 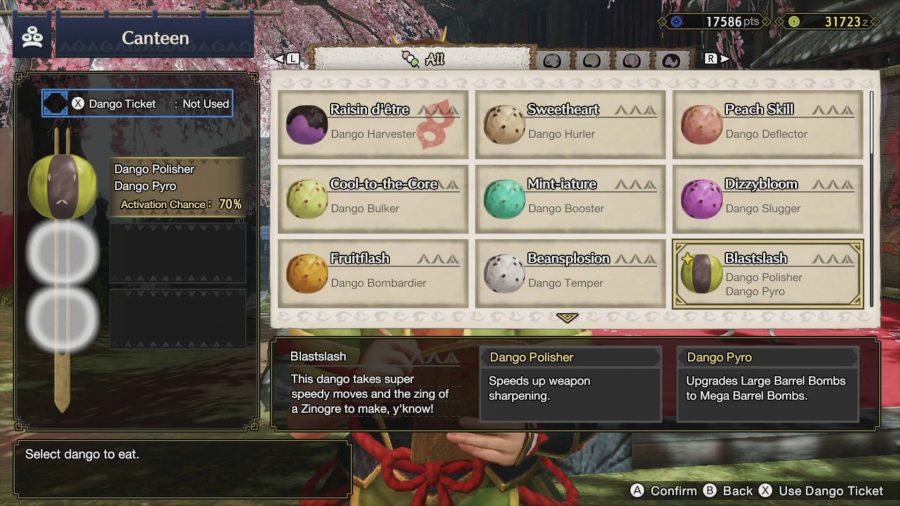 Of course, these options are not the only ones on offer, and you’re free to mix and match as you please.

Here is the full list of Dango flavours, separated by category: