Monster Hunter Rise has the potential to be the best Monster Hunter game to date. That’s what I said about the game based on my first impressions, and I’m glad to say that it does not disappoint in the slightest. It’s got a wonderful theme, the monster designs are excellent, and it’s taken everything that made Monster Hunter World a joy to play, but does so much more with it.

The Elder from the village of Kamura sends you, as a new hunter, to stop the rampaging monsters hellbent on destroying your home. Compared to World’s story, it’s less grandiose in scope overall, but does a lot to set up the impending dangers ahead. There’s a hint of melodrama in the Elder’s laugh, but other than that it’s relatively inoffensive in both English and Japanese.

You’re assisted by the entire village, including two mysterious twins, and a host of humans and animal friends. Previous Monster Hunter games relied on the cat-like Palicoes to do the heavy lifting when it comes to cute animal sidekicks. Rise instead introduces us to Palamutes, faithful canine companions that are one part noble steed and one part fierce warrior. Not only will they batter monsters by your side, your doggo makes chasing after them or climbing on top of steep cliffs a breeze.

And yet, they’re not my favourite animal friend in Rise. No, that honour goes to the Cahoots – the owl every new hunter gets that delivers messages. I name my one Blathers, because that’s the best name for an owl. Blathers eats food from my hand and nestles up to me in affection. I once sent him away close to the edge of town, and he decided to go bother the ninja sentry that stood precariously on the rooftops. 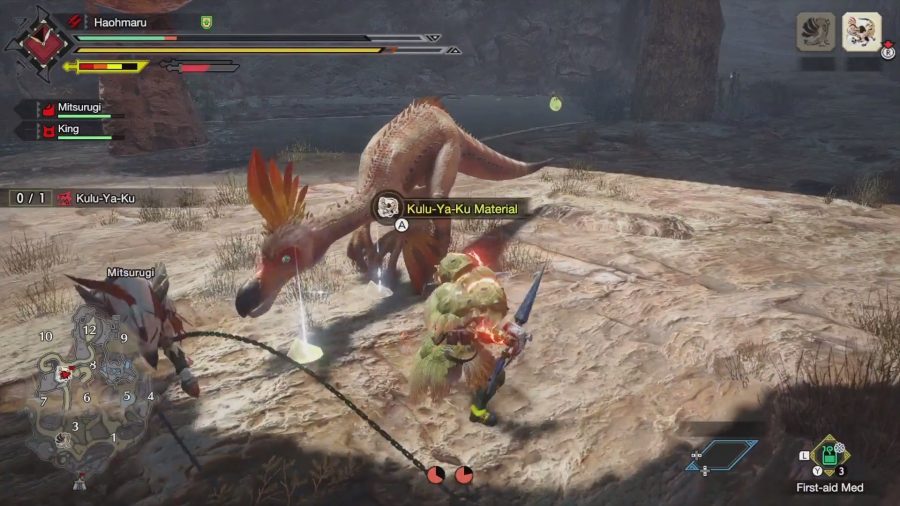 The village feels alive, with the bustle of the locals going about their business as you proudly strut in the latest fashion

That’s probably my favourite thing about Monster Hunter Rise: its attention to detail. Making my Cahoot the bane of the local village guardsmen standing on top of a pagoda is one thing, but the arthouse cinematic introductions for every monster is genius. The menacing low-note plucking of the koto strings, the black lines that are an homage to the creepy, grainy footage from Japanese horror film Ring, and the unsettling poems warning not to underestimate the beast I’m about to hunt. All of this is an excellent way of highlighting why each of the monsters are monsters, something that prior Monster Hunter games lack for the smaller beasts.

Unlike every other Monster Hunter game, Rise has a theme, and it plays into said theme with enthusiastic dedication. The hub area, which incidentally is far less confusing compared to World’s spaghetti junction-like walkways, is a quaint Japanese-style village with pagodas and other Japanese touches. The village feels alive, with the bustle of the locals going about their business as you proudly strut in the latest fashion, or whatever slapped together mish-mash of monster parts you threw together seconds before the next hunt.

Weirdly though, Monster Hunter Rise’s story feels smaller in scope, as the credits roll surprisingly early. It’s a trick, as there’s a substantial number of monsters to hunt, including some old favourites making a return, and some excellently designed newcomers. The fight with Bishaten, a monkey-like creature that yeets different flavours of fruit at you, and Goss Harag, a giant bear-like behemoth that forms ice swords on its hands, are particular highlights. 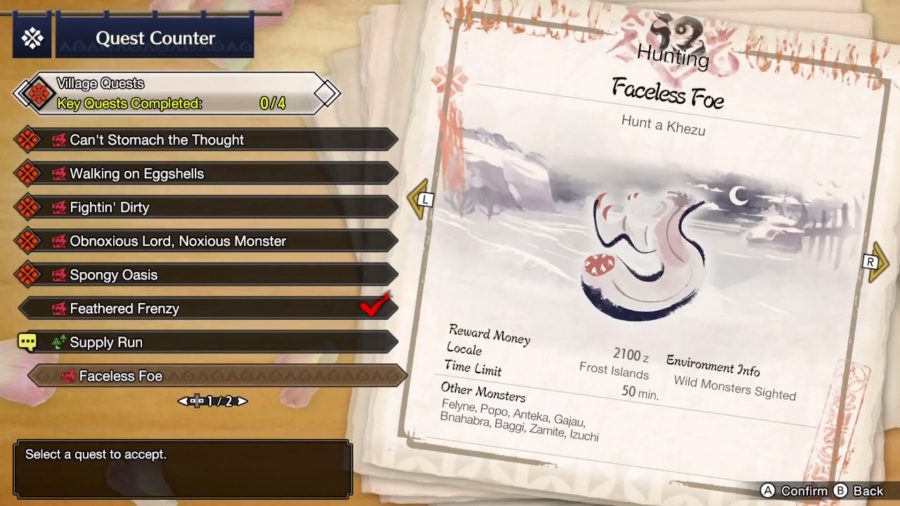 If you’re just playing through the Village Quests, though, it can feel like Rise is holding back at times. Long-term Monster Hunter fans will enjoy the challenge of taking on the Hub Quests, as the monsters here have significantly more health and can deal greater damage with every hit. You will need to complete these as well to see everything, including the Apex monster variations (they’re like Tempered Monsters from the previous games), but that’s what fellow hunters are for.

Thankfully, I haven’t had any issues playing online with friends or randoms. Occasionally I’d join after the hunt had already started, but not so significantly ahead that I’m not able to contribute in a meaningful way. Joining up in games is as simple as talking to the village courier or interacting with the Quest Board in the Hub area. It’s just as well: these monsters, particularly when you’re going against the harder ones from the Gathering Hub missions, are made of strong stuff.

Each one of the areas in Rise is massive, and not just because they’re one big map rather than areas separated by loading screens like in previous Nintendo-based Monster Hunter games. With the help of Wirebugs and your faithful Palamute steed, you can scale cliffs, getting the lay of the land from up high. There’s more freedom of movement, meaning you don’t have to resort to following the same path to find a Rathian’s nest. 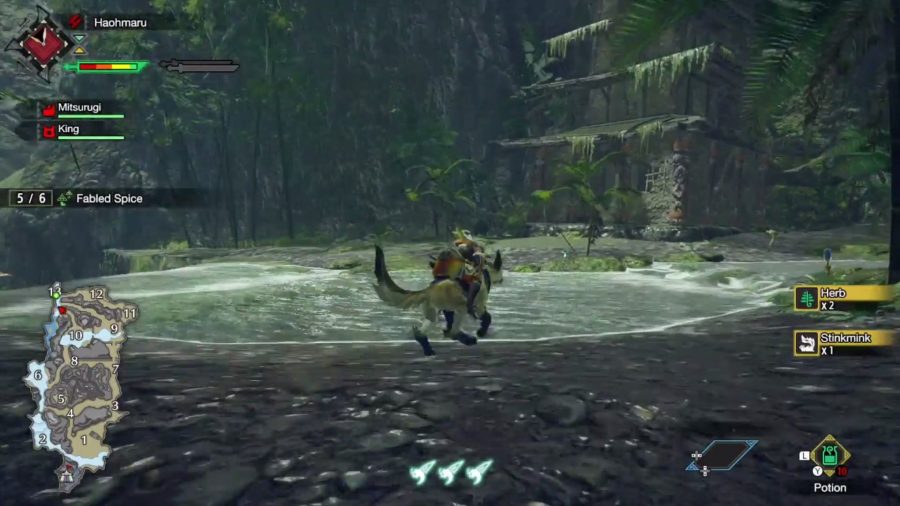 If Rise has one significant drawback, it’s the performance

The tracking bit of hunting monsters in Rise is now somewhat trivial. Monster Hunter World requires players to find traces of monsters and track them down with the help of colour-coded fireflies. Older Monster Hunter games relied on players to track them down manually, then physically tag them with a paintball to keep track of their movements. Rise doesn’t do any of that, instead opting to just show the monster on the map at all times. It does get rid of a lot of the downtime and makes the game friendly to newcomers, which is good – don’t get me wrong. It just feels like the ‘hunting’ part has been unnecessarily nixed to me.

My favourite tactic in Monster Hunter World is also gone, but in its place is my new favourite: controlling monsters. Now, instead of chipping away at monsters like an annoying flea, you can use the Silkbind to force them to duke it out against other monsters. If there’s no monster around, you can also, in a rather sick and twisted way, slap the monster on the rump to make it hurtle into a wall repeatedly until it falls over. The reason it’s my new favourite tactic is that I can taunt each victim after every blow by whispering ‘stop hitting yourself’. Am I cruel? Perhaps, but when some of these beasts can wipe my entire health bar by sitting on me, I’m taking every opportunity I can get to score points.

Actually fighting the monsters with all of the Monster Hunter Rise weapons is more fun than ever thanks to the Wirebugs. Suddenly heavier melee weapons like the hammer and the switch axe get a lot more vertical attacks, making them infinitely more fun to swing. I still resort to my tried and tested Dual Blades for the most part, but I was more encouraged to experiment than in World. What’s more, the new Switch Skills in the item box vary up the combat significantly to suit your play style. 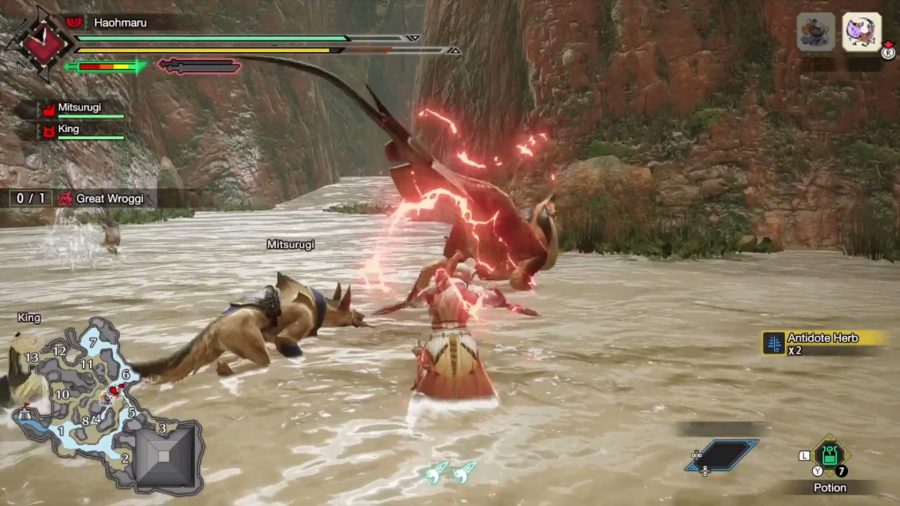 If Rise has one significant drawback, it’s the performance. I’m perhaps a bit spoilt by the PC version of Monster Hunter World, and its silky-smooth performance, so expecting similar results out of the Switch is like expecting to find diamonds in silt. It is certainly possible to play with the 30fps that Rise targets, but I do find that my reaction times aren’t as sharp. That said, it’s impressive that a game of a similar scope to Monster Hunter World is able to perform as well as it does on Switch.

I also think that at least one of the systems is somewhat unimportant to making significant progress. The Buddy system, outside of your faithful companions created at the start of the game, never really amounts to much outside of sending them to fetch new items. Perhaps there’s more to it that I don’t understand yet, but right now I’m using it to farm for items, and it feels like I should be doing more.

Qualms with performance and the Buddy system aren’t deal-breakers, though. I still maintain that Monster Hunter Rise is the best Monster Hunter to date. I always knew the combat was going to be good, but what stuns me is the attention to detail, and the fact that everything works. I encourage anyone with a Switch to at least give it a try, and if you are new to the series, this is the best game to start with.

Rise nails the theme, introduces smart improvements to combat, and is a thoroughly fun experience from start to finish. If you don’t mind the dip in performance compared to the previous game, it’s the best Monster Hunter on the market