As the coronavirus pandemic swept across the world earlier this year, sales of games like Pandemic and Plague Inc. also increased. It seemed that, despite the horror and millions of deaths worldwide, the virus had piqued gamers’ collective interest in contagion-themed games.

It wasn’t just video games, as Matt Damon’s 2011 movie Contagion, which has since been praised for its scientific research and accuracy, shot to the top of the Netflix charts. Whether people were trying to look for answers or just wanted Matt Damon to show them how to react to such unprecedented circumstances, Plague Inc. developer Ndemic Games pointed out that their game was just that – a game.

However, the company freely admits that all of its simulations are based on scientific research and designed to be “realistic and informative,” and now the developers have turned their hands to creating a cure. In-game, that is. Plague Inc: The Cure is a free update for Plague Inc. that sees players do the opposite of the premise of the original game – they have to stop the virus.

Instead of taking control of a virus, disease, or plague, players now control teams of global scientists trying to stop the spread of a pandemic. It all sounds a bit close to home, and again developer Ndemic reminds players that this is a simulation, but it still provides hope in such a bleak year.

James Vaughan, the founder of Ndemic Games, wrote a statement about the update: “Eight years ago, I never imagined the real world would come to resemble a game of Plague Inc. or that my game would be in a position to help educate and inform people.” However, he and his team have taken this opportunity and made the best of it, aiming to educate players on the complex topic of tackling a real world problem through their game. You can read the full release here, but the game is out now on Android and iOS. 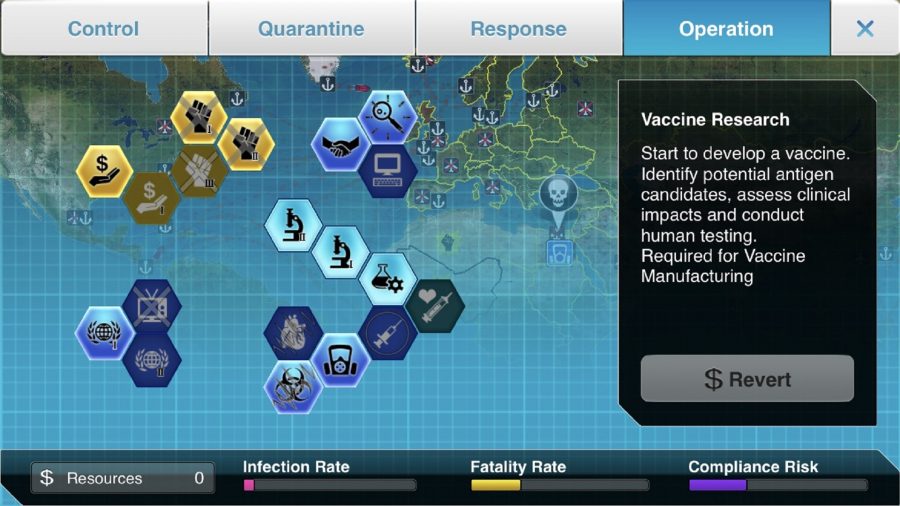 Richard Hatchett, CEO of the Coalition for Epidemic Preparedness (CEPI) also worked with Ndemic to make sure all their information and gameplay was correct and potentially educational. “From contact tracing to vaccine development and manufacturing,” he explains, “Plague Inc: The Cure encapsulates the complexities of a global pandemic response and highlights how crucial international collaboration is needed to address such a threat.”

Ndemic Games also donated $250,000 to help fight coronavirus earlier in the year, and continues to provide educational resources with Plague Inc: The Cure, which will be free “until COVID-19 is under control.”

If this update has got you wanting to download the game again, be sure to use our Plague Inc. tips guide to make the most of your plans to infect the world – or save it.