Maybe it says something about how twisted people’s tastes can really be, but Ndemic’s Plague Inc. was a surprise mega-hit for the one-man developer, hanging out near the top of the paid charts for years and receiving several well-received expansions. You’ve probably played it, and if you haven’t, we highly recommend that you do.

Now, we have a spiritual sequel that takes the same combination of a board-game-style map and branching development trees and applies them to the theme of rebuilding a nation after an international conflict. This time, you’re playing the good guys (hopefully), and Ndemic have put together a game that is just as, if not more, compelling than their previous effort.

Initiatives are rolled out around the region automatically. You give the order, and your subordinates make it happen. At first it can be difficult to understand the effects of your orders, since they are rolled-out piecemeal and sector by sector. However, you’ll definitely appreciate the improved roads you put down when your national army has to run from one end of the map to the other to put down an insurgent group.

The costs of these initiatives are measured not only in dollars spent, but also in inflation and increasing corruption. Pouring money into an ailing nation sounds like a great idea, but too much at one time will cause prices in the region to rise, meaning you need to instead carefully drip new programs in like an IV. Also, implementing new programs that are supposed to help people means that other potentially less scrupulous people have to be put in charge, which lets them skim some off the top and can lead to more problems later. Balancing budget, inflation, corruption, stability, reputation, and insurgent activity is the core of the game.

The next layer of the game is the military tactical level (dig that? Check out our list of the best mobile war games), which, although it might not appear so at first, is heavily dependent on the policy layer. Here, you move units around the map to deal with insurgents that pop up, which is always at the most inopportune times. If the insurgents manage to control a sector, they will quickly drain your reputation, so it’s a good idea to keep your soldiers in the thick of it. Once defeated, however, they will scurry off into a neighboring sector, which can lead to you chasing them all around the map.

To actually eliminate an insurgent group, you have to corner them so that there is no escape. It’s a game of cat and mouse, but one where the cat also has to worry about not antagonizing the local civilians and is subject to being recalled at the end of a tour of duty.

(If tactical thinking is your jam, check out our list of the best mobile strategy games.)

Finally, there’s plenty of dilemmas that will appear and require careful judgement. These will spell out the probabilities of different consequences depending on what you choose; typically you trade cost in dollars against a change in reputation, a risk of additional corruption, or emboldening insurgents.

Do you pay off the warlord, or try to arrest him and risk him joining the insurgency? These dilemmas are also how the game handles issues like civilian casualties from your airstrikes (Do you cover it up, or admit responsibility? It becomes more difficult over time.) They ultimately direct the endgame, as you negotiate with the rebels to bring peace to the region without losing too much face. 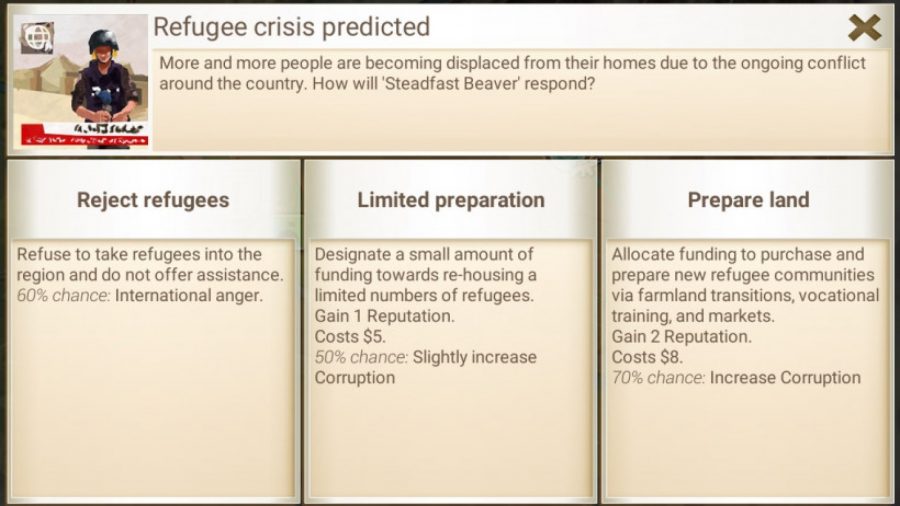 The game primarily portrays the difficulties in rebuilding a country after a war, the compromises that are made and the ultimate costs

There are a lot of systems interacting in the background in Rebel Inc., which serves to take some of the pressure off the player but also makes some of the game a bit opaque (you can check out our Rebel Inc. tips guide to help make it clearer.) Key to success are the Government initiatives that control corruption, speed implementation of civilian initiatives, and make other tools more effective; but you might not realize that at first since those initiatives don’t have as immediate or visual an impact on your situation as a new military unit.

Once you get the hang of it though, Rebel Inc. offers a lot of challenge and requires careful thought to keep its many plates spinning through its harder difficulty levels and maps. Yet, it’s still a game that you can easily pick up and put down thanks to the high-level of automatic administration that’s taken care of for your governor. 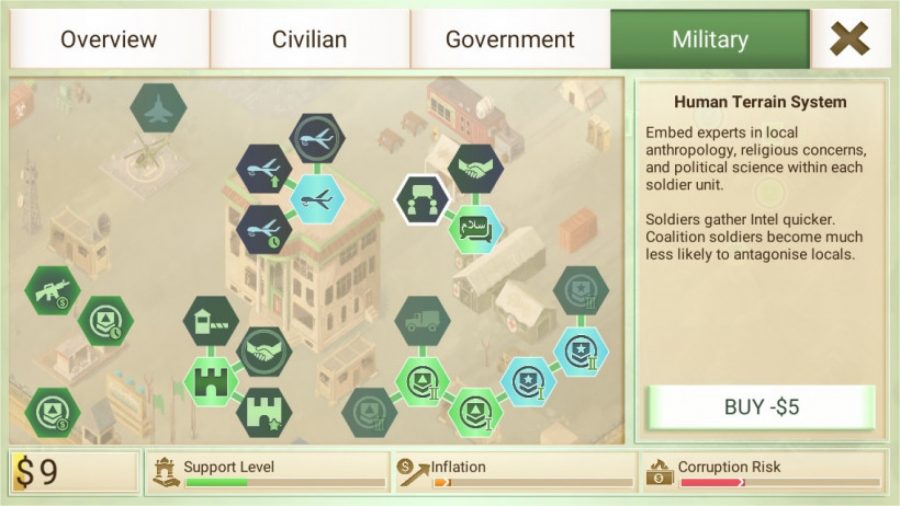 Some people will question the taste level of this kind of simulation in this day and age. Rebel Inc. doesn’t have the same problem that Afghanistan ’11 had because its rebels are only elliptically related to the Taliban, so there’s no need to fear Apple removing this new game on the same (incredibly silly) grounds.

There are probably valid criticisms to make of Rebel Inc.‘s portrayal of reconstruction, but only because any simulation is going to have to simplify a massively complex situation in order to shrink it down to our phone screens. This simplification could reasonably make people doubtful of the message the game is sending; if only the idea that it is even possible to “win” a counter-insurgency.

However, in this case I think the material is handled with enough gravity and care, and the developer is engaged enough with players that any problems that might surface will be considerately dealt with. The game primarily portrays the difficulties in rebuilding a country after a war, the compromises that are made and the ultimate costs, and that overall message is a powerful and necessary one in our recent decades of jingoistic adventures in the Middle East.

For that reason alone, we might hope that Rebel Inc. equals its predecessor’s popularity in the App Store. But it also deserves to make it to the top of the charts on its own, for being a complex but easy-to-play sim game.