One of the great things about Rebel, Inc. is that, while the gameplay is relatively light on interaction, its systems hide a surprising amount of depth. Later maps and higher difficulty levels can provide a huge challenge to even the most seasoned player. That’s why we decided to create a guide of Rebel Inc. tips.

On the surface, it looks a lot like a military strategy game, but the most important things are going on behind the scenes. It’s easy to get distracted by chasing insurgents around zones trying to trap them when your real mission is to build up support with the local population. Zones with high levels of support and especially those already secured are very difficult for rebels to pop up in. Make sure to take some time to pause the game and check on your levels of corruption and stability and make sure you are adding new developments continuously.

But we’ll focus on Rebel Inc. tips and all that jazz later in this guide. By the time you’re done reading it, crushing a rebellion will come as easy to you as swatting away a fly.

Here are all of the Rebel Inc. tips you need:

Compared to Plague Inc., it’s quite difficult to understand what is happening behind the scenes and how your actions affect the map, which you can read about in our Rebel Inc. review. A big part of the trouble is that it’s all too easy to focus on tactical engagements with the insurgents. The solution to this is to remember to pause the game from time to time, even when you think you’ve got the rebels on the run.

You never know when a new group might pop up in an area that you’ve neglected. Selecting a zone can tell you a lot about the area. Key information to keep track of is whether it is urban or rural and the types of roads located there. If you are struggling with a map, check the zone types that you most often lose support in, and tailor your development to those zones.

Tank commander is a General who takes a different approach to the fight by bringing armor in as soon as possible. This feature may be a disappointment for many players, however, since it actually functions mostly as a thesis demonstrating the inappropriateness of tank warfare for COIN (or in game terms, a new way to challenge yourself). This is because, although tanks move and win fights quickly, they can’t support other units and can’t get into the difficult territory that insurgents like to hide in. 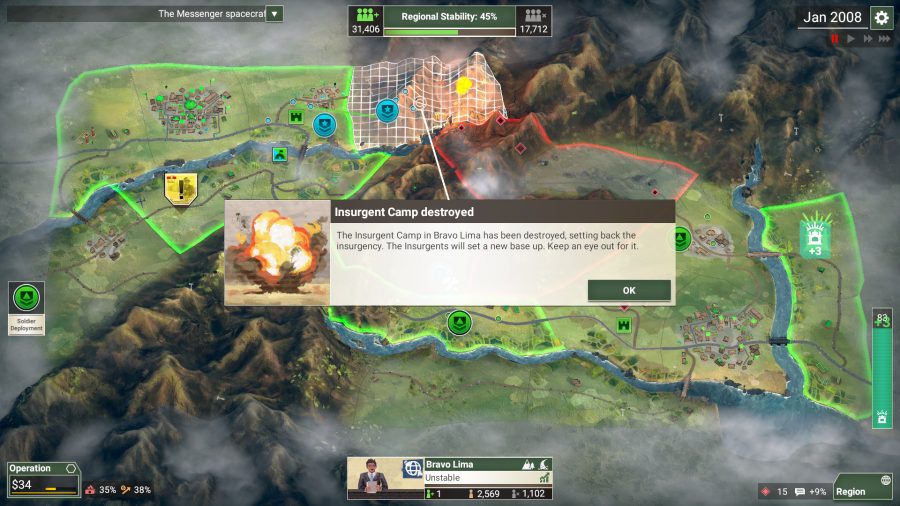 The best way to use tanks is to take advantage of their mobility to quickly sweep insurgent groups out of your populated areas. You’ll have to make some major investment in Coalition troops to keep the insurgents on the run once they are in the hills, though. To compensate for their inability to support your other troops, get garrisons ASAP.

rebel inc. advisors: Who are the best

Advisors are like the genes in Plague, Inc., giving a slight bonus or sometimes an additional challenge to your playthrough. You can buy these through an IAP, but can also easily earn them by playing. You get one for each round you win, and there are 36 in total. They come in different categories, but which are the best?

rebel inc. Base locations: where to build your base

Base location is vital. You’re going to want a lot of infrastructure and connected cities. This speeds up deployment of your developments, since they spread outward from your main base. Sticking your base right in a corner means development can only spread in one direction, which slows you down when building support with the population overall.

For controlling insurgents, however, being pretty close to a corner can be a big benefit. If they appear in that area, you can easily wipe them out. Additionally, quickly controlling one side of the map reduces the likelihood of insurgents catching you in the middle and forcing you to split up your military forces. Finally, if the insurgents capture a highly-populated area your reputation will take a big hit, so placing your base on a big city is a great idea. 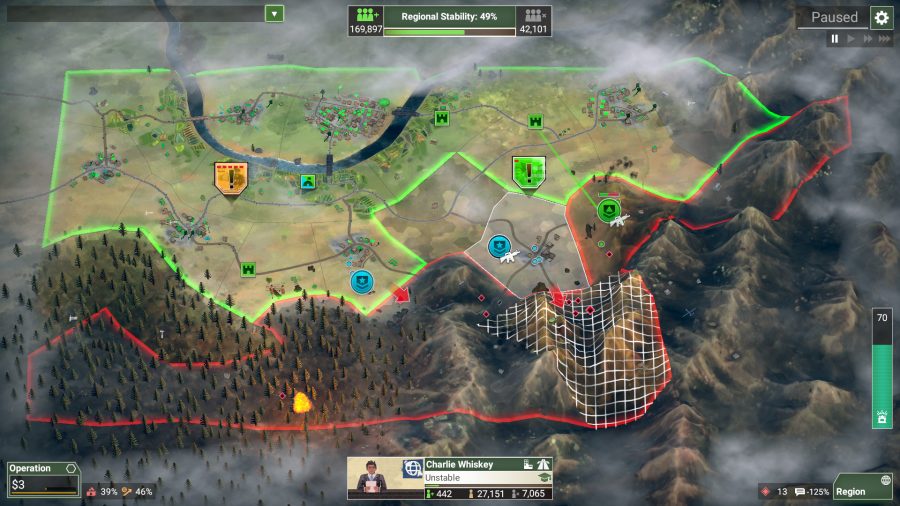 rebel inc. services: Which services you should prioritise

Initially, you’re going to want to start by providing basic Services that have fast roll-outs and do well with the hostile population: education and healthcare. But don’t get Core Health or any vaccinations right away, because you can get a big support boost by immediately responding when people complain in an event later. A few government improvements also have a stronger effect at the beginning of the game:

Once some basic Services are in place, Developments will solidify your hold on provinces where you have a positive reputation, making it difficult for insurgent groups to rise up there. Try to get one Civilian improvement each month to continuously accelerate your support-building engine, and don’t get distracted by seemingly-necessary military improvements. Winning the support of the people also prevents insurgent groups from rising up.

Watch your inflation level and notice when it makes prices rise. When the difference is only one dollar, it’s usually better to go ahead and implement the policy to get its benefits started earlier. After that, prices will spiral out of control, hurting your ability to respond to emergencies. It only takes a few months for things to settle down, so it’s better to wait. Generally speaking, limit yourself to two initiatives a month to keep this under control.

rebel inc. insurgents: How to deal with them

With military action, your goal should be to keep the insurgents on the run, since you start losing reputation as they take hold of regions. Don’t spend too much on units to try to trap them early in the game, since new groups can easily appear in distant provinces. It’s better to build local support and make it harder for insurgent groups to appear. You want to try to keep insurgents away from highly-populated areas, since losing those areas will cause a huge hit in your support.

A well-supported unit that can push insurgents out before they take hold is better than two units that get bogged down, letting the insurgents grab more territory. Coalition units should also stay mobile and not get tied up, since their presence will lower support. Also try not to retreat, as that will cause a very significant reputation hit. 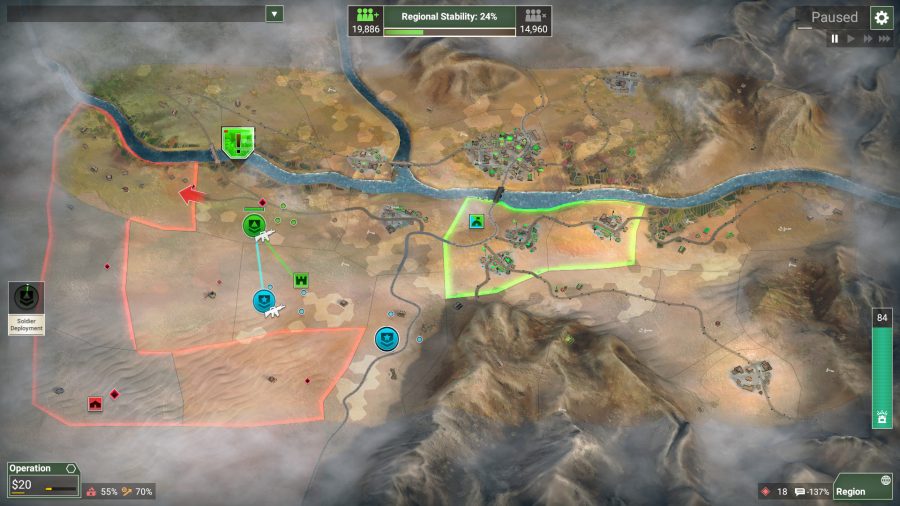 Early military improvements (translators and the ghoulishly-named ‘Human Terrain System’) should help gather Intel and gain support of the locals, since your units will be operating in more distant locations. After that, garrisons are easily the most effective military advancement once you’ve started recruiting your first National soldiers. Once purchased, they will pop up regularly, usually in a useful province, essentially giving you a cheap and instantaneous stationary support army.

Drones should also not be underestimated. Before a military unit can engage the enemy, they have to gather intelligence about the region, which slows them down massively and lets rebels spread quickly beyond your capabilities. Drones also help you find insurgent bases and are necessary on Brutal difficulty.

rebel inc. Negotiations: how to negotiate in rebel inc

When you get the opportunity to negotiate with the rebels, you are in the endgame. Keep in mind that any territory they still hold will hit your reputation hard, so it is often better to take a small reputation hit in negotiations if you have a better military position so you can focus on pushing them back. In a very strong military position, it’s better to not enter negotiations, since it’s likely to cause more insurgents to spawn, and you can win the game by stabilizing all regions without declaring peace.

Brutal mode makes the game more difficult by increasing the rate of appearance and strength of the insurgents. Your first instinct might be to rapidly deploy Coalition soldiers to try and corner the rebels. This strategy works well at Standard difficulty, and can clear maps very quickly, but on Brutal you’ll have to play a longer game. There are simply too many rebels to successfully defeat purely through tactics, and extended deployments of Coalition soldiers will depress your ability to build support. Get National soldiers started right away instead, so they’ll be ready to go when it hits the fan.

As a result, you’ll need to focus your development on improvements that will also help your soldiers or undercut the insurgents from the very beginning. Here are a few tips: 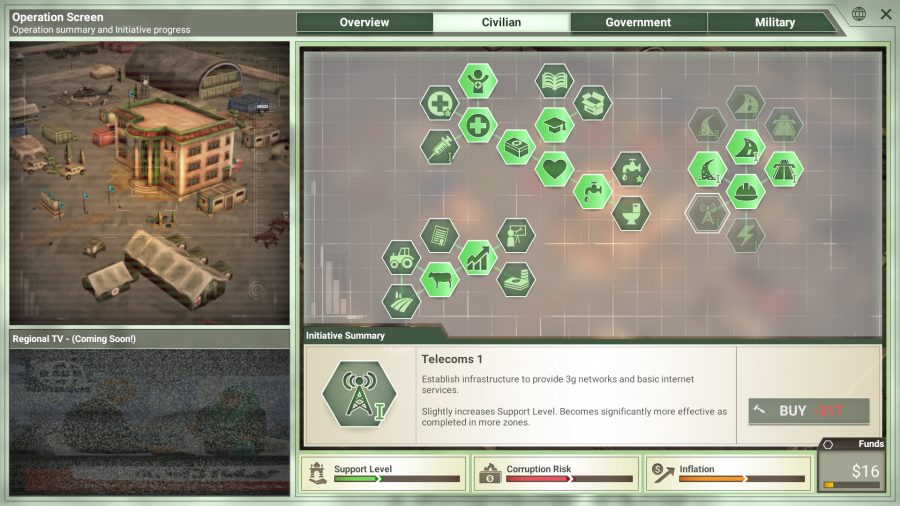 One of the biggest differences in Brutal mode is the higher rate of insurgent bases appearing. These need to be taken out as quickly as possible, because they will spawn new insurgent groups and give bonuses to the ones that are already out and around. On Brutal, don’t be shy about using drones and airstrikes freely to take out those bases; they will also help defeat insurgent groups. Also if you’re looking for more challenging tactics-based games, be sure to have a look at either our list of best mobile strategy games or our list of best mobile war games.

A recent update to Rebel Inc. adds a great new map with an interesting twist. You need to defend the titular dam from the insurgents and protect the convoys that move to repair it. Here are a few tips to make your life easier: 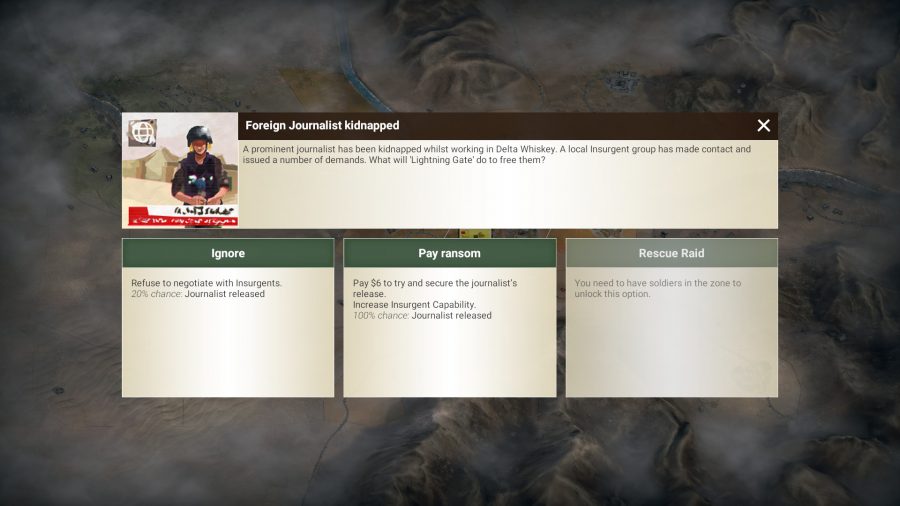 The other expansion map ups the difficulty and realism by facing you off against insurgents with a well-developed network of caves and tunnels in the mountains. Taking it slowly is the name of the game here. Since the rebels’ mobility is improved, yours will need to be too. Here are some tips:

And there we have it! If you want to download Rebel Inc. for yourself, you can find it on Google Play and the App Store! If you want more similar games, be sure to see our list of the best mobile strategy games.