Roblox has one of the most passionate communities in all of gaming, and everything about it tends to be picked apart and discussed. One such example would be its logo, which has been redesigned a number of times over the years and always ends up causing a bit of commotion. Some of these redesigns have often been fairly minor, but many of Roblox’s earliest logos are now completely alien to modern or younger players.

The number of alterations made to the Roblox logo shouldn’t come as too much of a surprise given that the game is now 14 years old. It’s often easy to forget its age thanks to its popularity among younger gamers and the fact that it remains so relevant and even cutting-edge in many ways.

Yes, Roblox launched back in 2006, but did you know that the company was founded two years prior by David Baszucki and Erik Cassel? That’s when its first-ever logo was revealed, and that’s where we’ll begin our look back on the history of Roblox’s logo.

The Roblox logo through the ages

This one’s certainly showing its age, isn’t it? Nevertheless, it’s a neat piece of history that also highlights how far Roblox has come. The varied colours appear quite playful, but it perhaps hews a little too close to some of Google’s earlier designs. This one didn’t stick for long, and it was followed by a radical new look.

The logo’s first major redesign was also one of its wildest. Just look at that striking red outline and the little accent over the ‘o’. Sure, it’s painfully mid-2000s, but it’s so distinct and retro by today’s standards that you can’t help but appreciate it.

This one was another huge departure from what came before. It appears a lot more kid-friendly and fun than the previous logo, perhaps in an effort to engage younger players.

This was a very iterative redesign, refining the previous concept without changing things too much. It’s generally just a whole lot nicer to look at than the gen three design.

The fifth major Roblox logo arrived in early 2017 and offered the cleanest redesign to date. With nice, blocky letters, red colouring, and a tilted ‘o’, it’s a very modern logo with a lot to appreciate. In an official company update, David Baszucki called it “a testament to our cross-platform vision, as well as our commitment to helping power the imagination of kids of all ages around the world.”

The most recent Roblox logo is another iterative update. It’s most often white, though there are also black and even graphite variants. The tilted ‘o’ in Roblox is still used as the game’s key icon.

How to draw the Roblox logo

Finally, here’s a handy video tutorial on how to draw the modern Roblox logo. The red colouring is now slightly out of date, but that’s an easy fix when you go to create your own. 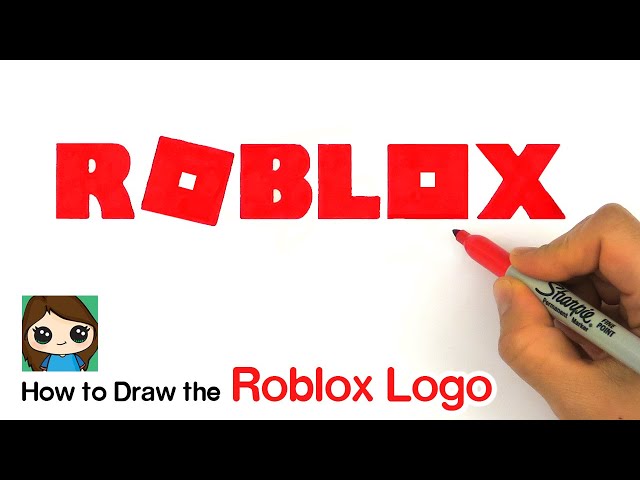 You can grab Roblox now from over on the App Store and Google Play. And, while you’re here, you should also check out our list of the best Roblox games, Roblox slender guide, and tips on how to earn Roblox free Robux.